This is the first of nine blog posts covering my recent trip to Papua New Guinea with Ian Barnard, Steve Greenfield (America), Adam Hudson (London), Tony Hukin (Herts) and Paulo Paixao (Portugal). I had planned the trip and used the excellent services of Sicklebill Safaris who acted as our ground agents, and as heard from other independent groups, they were a key component on the successes of the trip.

Despite the 20 hours of flying I had a good nights sleep and woke up early at the Brisbane Airport hotel, and the four who weren't catching a flight to Port Moresby until mid-morning, opted for a short stroll around the nearby ditches. The bird list for such a unproductive looking area was fairly decent, with such species like Shining Bronze Cuckoo, Rufous Whistler, Little Grassbird and Mistletoebirds being seen with ease.

The Air Niugini flight from Brisbane to Port Moresby was fine, and after quickly grabbing a visa and the luggage, we got transferred to the Citi Boutique Hotel, where a short while later, Leonard and a large vehicle picked us up and we quickly made our way to the PAU (Pacific Adventist University) Ponds, some 30 minutes from the hotel. This site is a classic start for groups visiting PNG for their first time as it allows the commoner species to be seen easily, but interestingly some species seen today were not seen for the whole of the trip. Its also one of the few places close to Port Moresby where it's safe to walk around and birds being used to people, just a shame that couldn't be said for the rest of the trip where birds obviously feared any human presence.

A circuit of the grounds in the two hours we had produced good views of Fawn-breasted Bowerbirds (with an acting bower nearby), Orange-fronted Fruit-Doves and a number of water birds. The highlight came at the end where Leonard led us to some trees, where after much looking up, a total of three absolutely huge Papuan Frogmouths were found. It was great to see the two targets so easily, and would hopefully prove to be a good omen for the rest of the 23 days.

Getting back to the hotel was quicker due to less traffic, although a rolled over bus caused a minor disruption, but the sights of locals hacking off wing mirrors and whatever else they could find was very comical.

A good start to the trip, and our first of eight internal flights was booked for the morning, so an early night was most welcome.

Highlights for this afternoon: 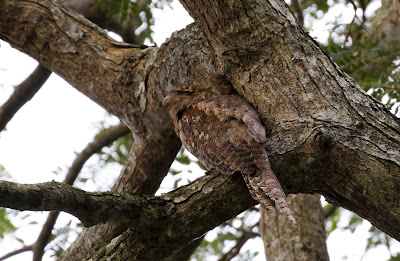