It felt good this morning with an apparent drop of Chiffchaffs and a few bits flying overhead. The usual waders were about, which included two Knot, two Greenshanks, 15 Dunlin and a Common Sandpiper.

The highlight was a smart Ring Ouzel on Haven Brow, and whilst walking the top fields, a Tree Pipit flew over. 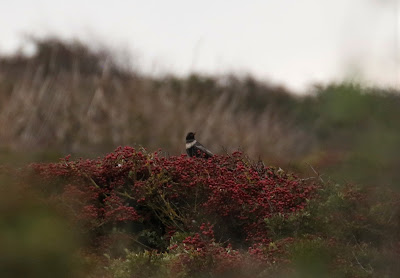 An early start at Thornham Marina today where the stunning juvenile Pallid Harrier flew right past in front of me (and behind the birder who went running down the lane following the pager message... who runs for a Pallid?!) soon after sunrise. It performed for ten minutes before seemingly drifting low north and out of sight. An Osprey also flew over, a Whinchat was out in the reeds and a Firecrest was calling along the east side of the island. There were also a number of Sandwich Terns in the channel.

After a short time guiding two ladies, I quickly went and saw the showy Red-backed Shrike in the south-western corner.

It's been a tough autumn, so it was re-assuring to see some decent birds today.

This is now the third Pallid Harrier I've seen in Sussex (why didn't I go for the Beachy bird last year!) with other juveniles, both at The Burgh, in 2011 and 2015.

Another tour up on Beachy Head today was a vast improvement compared to yesterday. From the off, Siskins were ploughing west and over the course of the morning I counted 180! Hirundines were also a main feature with thousands along the cliff edge creating a brilliant sight as they whizzed past our heads. A White Stork over Hodcombe created some excitement for the group, but other migrants were in relative short supply, though a respectable list was formed in the end.

Beachy totals are as follows: 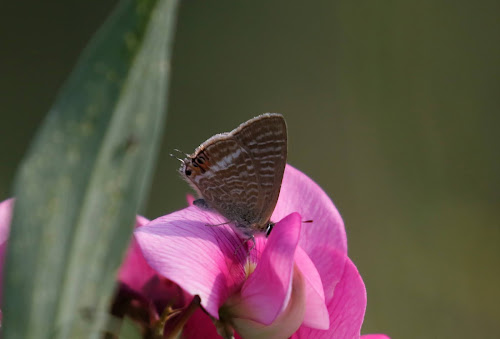 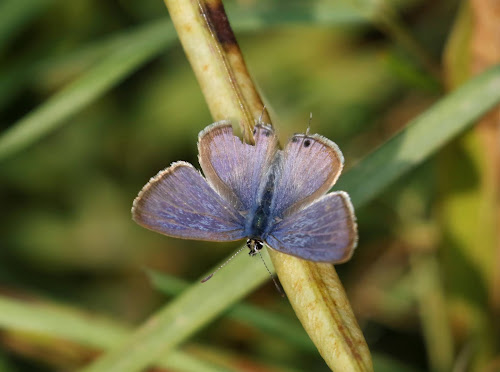 After a rather disappointing session at Beachy this morning with my Naturetrek group, this evening down the Cuckmere just about revived me. The waders are still keeping interest high, with now four Knot, 25 Dunlin, singles of Green, Common and Wood Sandpiper and three Greenshanks amongst the highlights. As I was walking back up towards the pub, a White Stork flew past me and decided to land on Exceat Bridge... it thankfully stayed long enough for a record shot!

Today, at Beachy, a raptor watch with LP produced a Marsh Harrier and a distant White Stork - presumably the one seen in the Cuckmere later on. A Swift also flew over plus a small scattering of common migrants. 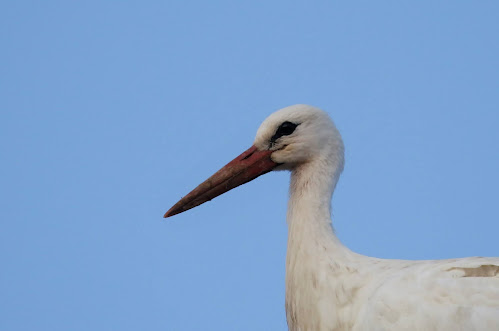 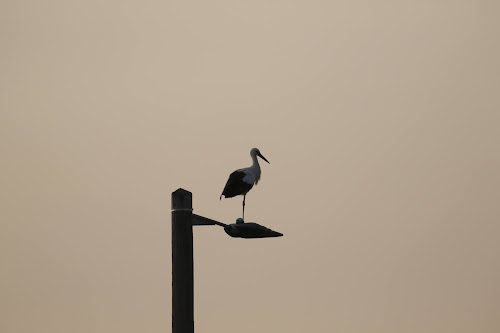 A return to Seaford Head today in far chillier conditions than previous days. Despite the clear conditions, there was little in the way of any overhead migration and it took some time for the grounded migrants to appear. Probably the highlight was a good number of Wheatears present with 45 counted; this included a flock of 28. A smart Pied Flycatcher and perhaps the same Merlin that was encountered down the Cuckmere last night were also noteworthy.

Afterwards, I walked the hills behind Denton, but it was disappointing to find no fields suitable for Dotterel. There were however plenty of migrants about, including a Spotted Flycatcher and a smattering of Whinchats and Wheatears.

Totals from Seaford Head as follows: 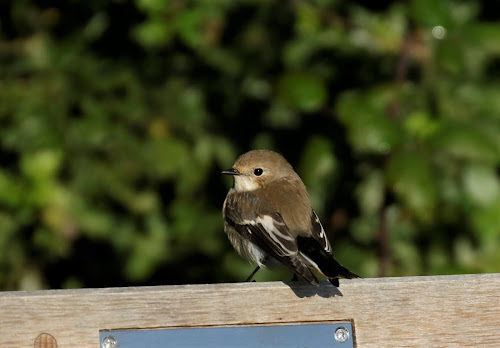 Another Naturetrek trip to Beachy Head today, this time in thankfully good weather after yesterday's 'hurricane', was far more productive than expected. There was plenty of variety flying over, whilst the usual grounded migrants were present. A couple of clients were keen to see a Grasshopper Warbler, therefore, I took a couple of them down to the gropper field and found four warblers in all.

This evening, with Dad, the Cuckmere was visited with highlights going to an Osprey, Merlin, and the long-staying Knot.

After a disappointing tour on Beachy Head this morning (thankfully two Grasshopper Warblers showed), finding two juvenile Curlew Sandpipers in the Cuckmere was some form of compensation. Also about were a Knot, Greenshank, Common Sandpiper, ten Dunlin and five Whinchats.

Yet again, a visit to Seaford Head failed to find any Wrynecks, both this morning and evening! 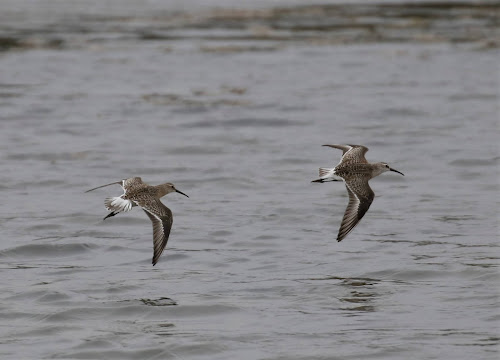 I only had a couple of hours this morning before starting work. The area started off relatively quiet, but as the morning wore on, a respectable number of migrants were found. Blackcaps have now arrived in force into Hope Bottom, and Harry's Bush was also somewhat lively with many Willow Warblers and a couple of Chiffchaffs present. A steady trickle of Swallows were flying eastbound, but little else was noted in what seemed like perfect conditions for some hefty diurnal migration.

This evening, after work, I twitched the trio of Dotterel near Ditchling Beacon (thanks Rich Kelly for putting the news promptly out after a great find!). Initially elusive and static, they soon became mobile and showed well, though they never came too close. 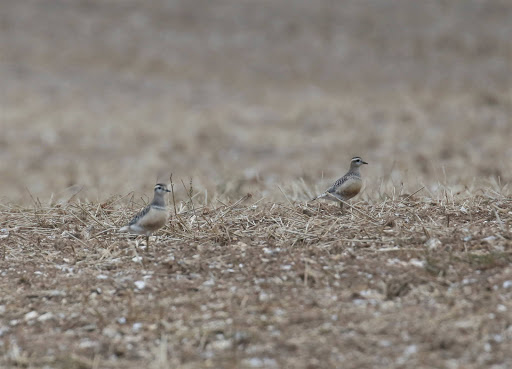 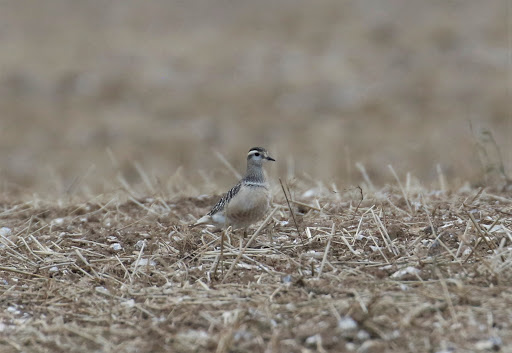 The first calm day after the northerly blow meant that for the first time this autumn, today felt very autumnal, and of course, rare. I decided to visit Beachy as I'd driven down from Alton in the early hours, which makes the trip more worthwhile than visiting Seaford Head.

Upon arrival, small numbers of Willow Warblers were moving in the bushes, whilst overhead, Tree Pipits, Siskins and Yellow Wagtails were evident as they moved west. The morning was very enjoyable with ten species of warbler noted, plenty of overhead activity and an excellent variety of other migrants; numbers weren't exceptional however, but this wasn't much of an issue... even Cow Gap had birds! Very few birders seen today!

After the morning circuit, LP and I commenced a raptor watch from the pub finding only a Hobby for our troubles (our Merlin at Belle Tout turned out to be the highlight!). Ca. 2000 hirundines were present late morning/early afternoon, the majority being Swallows. 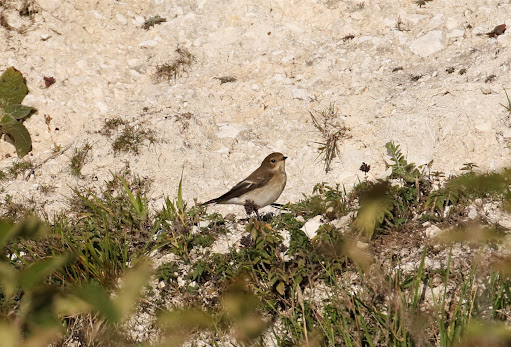 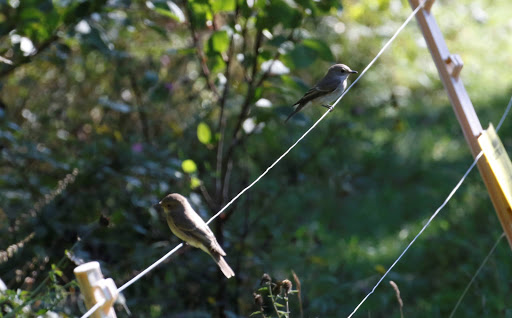 After last weekend's success, but still lacking any real skua movement, I opted on a Saturday morning visit to North Norfolk, coinciding nicely with the near-gale force northerly winds.

The first few hours was particularly enjoyable, with skuas constantly moving east and consisting of three species. There was also a huge westerly duck movement, again another enjoyable aspect of the morning. By 10am, the rain had arrived, and strangely, the passage dropped considerably. With little now moving, by 11am I was packed up and ready to go home.

Not quite the ending I wanted, but it was great to get another seawatch in. 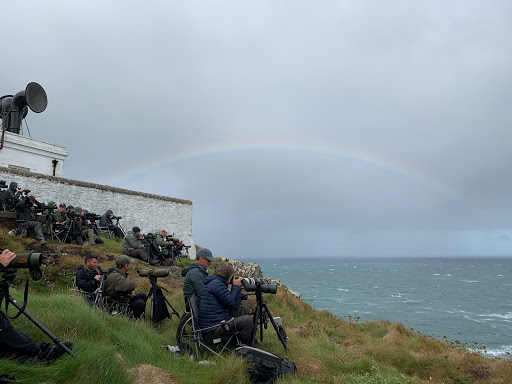 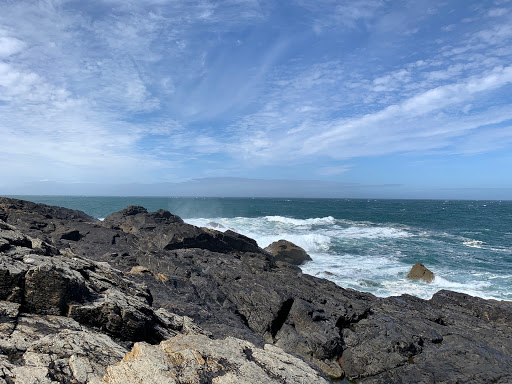