This is the fifth blog post covering my recent trip to Papua New Guinea with Ian Barnard, Steve Greenfield, Adam Hudson, Tony Hukin & Paulo Paixao. We were under the capable hands of Sicklebill Safaris who had arranged all ground arrangements within PNG and are experts in organising trips to this region.

Our next port of call was an area within the Central Highlands called Yasukom. This is a new area that has been opened up ever since Tari Gap has been out of bounds, not just for foreigners but also for many locals. We were scheduled to visit Tari up until Christmas time where it was taken off the itinerary, and for good reason. Whilst we were in Lae towards the end of the trip, we learned of a local massacre within the Tari region where at least 26 locals had been given the machete treatment, including pregnant women and children. Very disturbing and lucky for us we didn't visit.

So Yasukom was an option for us, and being only the second group to visit here, we were hoping for an exciting discovery or at the very least a different range of species that can be found around the Kumul Lodge area. To get to Yasukom, we drove N on the highlands highway for maybe three hours where we arrived at the Yaskom Resort, this accommodation suiting more so of a 'truckers' stop, but was perfectly adequate and in fact very comfortable within a compound area, so very safe as well.

We were led around the Yasukom area for two days by Max, where he and other locals have worked very hard by making trails and ensuring us birders were very well looked after. This site will certainly be on the agenda for others in the future as it offers a great range of difficult species.

We left Kumul Lodge at 6am to make good progress towards Yasukom. As we had been unlucky with Lawe's Parotia we gave it one last go near the start of the Tonga Trail. For a couple of minutes we thought we had struck gold when a Greater Lophorina was sat atop of a distant tree, but the craziness soon dispersed into slight disappointment, but not too much of the latter as were still watching a Bird-of-Paradise. We continued on to Yasukom with the next interception being a very dodgy police checkpoint, with (what looked to be) unofficials opening our minibus door and wanting to come in and investigate our bags, but thankfully these people retreated and continued on with their duties. We made it through and were now well and truly on the way, arriving at Yaskom Resort around 10.30.

Max offered us to have lunch at the resort at midday, but no way were we hanging around, so he kindly offered us the choice to head out birding straight away and lunch be brought to us on the mountain ridge......good idea!

A 4x4 is needed to reach the higher high points located in the Yasukom area, and our first trail was WNW of the resort, passing the picturesque Lake Iviva along the bumpy way. Our plan was to stay out for the rest of the day, and over the course of the day we found many good birds. Initially the path was very steep where good birds encountered were Hooded Cuckooshrike and the highly secretive Orange-crowned Fairywrens. Once we had reached the ridge to an open area, Max explained that from here on in the forest is intact all the way to West Papua, which if true then that is truly remarkable. Our lunch was brought up to us Papuan style and we enjoyed lunch with a fine view, and somehow the chips were still hot. We carried on along the trail and back into the depths of the forest forming a long but worthy loop. Several bird flocks were located although getting views of these very wary birds was not easy, although eventually all managed to see a Papuan Treecreeper, whilst most managed decent views of the extremely secretive Lesser Melampitta.

As the day went on we were desperate to get back up to the ridge in the hope of finding a Lawe's Parotia, but we arrived too late in the day to stand any chance, but this didn't matter as the list of birds seen today was worth the efforts of the very long walk, and at times, very dangerous walk with all of us having a little slip or fall down the very steep trails at one point, or in some cases, many times.

Just as the day was done, we lucked into finding a Stephanie's Astrapia, although tomorrow would be the day for getting better views of these. 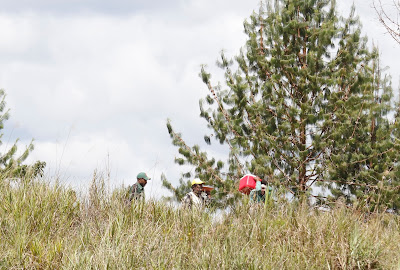 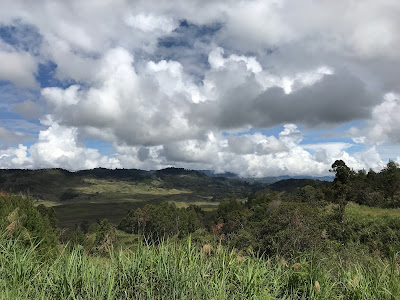 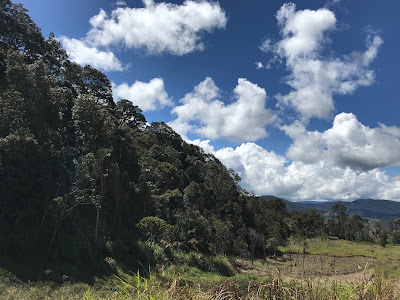 All day was spent birding, this time to the forested ridge to the NE side of Yasukom. There was another single steep and slippery trail used, but also a lot of time was focused along the road. We had many targets today and over the course of the day we succeeded in most.

By far the highlight were the bonkers King of Saxony Bird-of-Paradise, with a male undertaking its descending display flight to wow the female sat originally by its side, instead it wowed us. An absolute class bird. All this was happening whilst Brown Sicklebills were giving off their 'machine gun' calls, and Stephanie's Astrapias flew over revealing their incredibly long tails. Other top birds along the walk produced a male Loria's Satinbird and the extremely colourful Black-breasted Boatbills.

As the day wore on, we still needed some top birds and this was our last chance of the trip to nail some of them. Off the road we stood waiting for a calling Spotted Jewel-babbler to remove itself from the dense understorey (it didn't), but above us was one of our main targets, a calling Wattled Ploughbill. Initially completely invisible, it took a tense ten minutes of careful playback for the bird to come in, and come in it did by magically appearing right next to us. It's huge throat wattles made it look like a Red-collared Myzomela, another impressive beast of PNG under the belt.

The only downside of the day was witnessing some locals shooting rocks at the treetop birds with their catapults. Kids were also joining in along varying stages of the trip, and this is the biggest indicator as to why the birding here in PNG is so difficult, and also why my photography of many species is somewhat lacking. 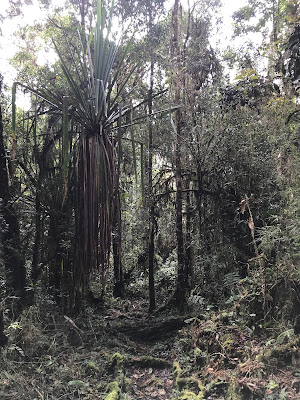 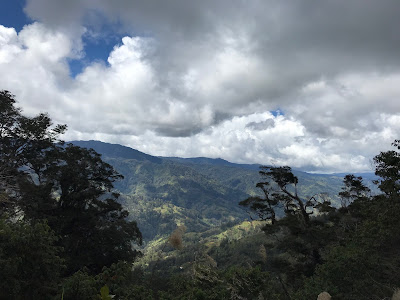 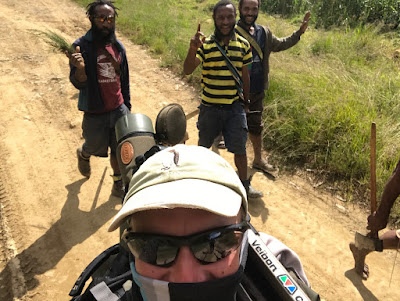 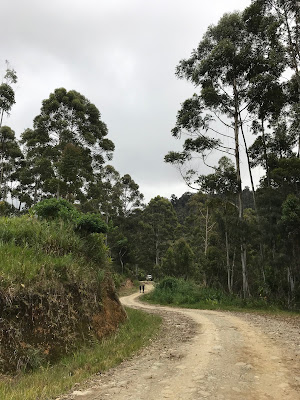 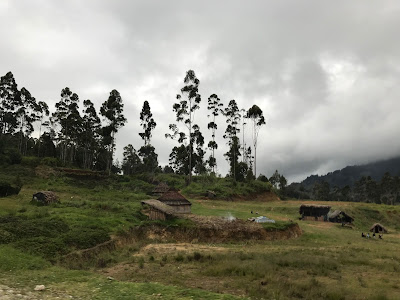 Well today was one day we weren't looking forward to. It was a travel day which meant two internal flights, one from the highlands to the capital, and straight up to Madang Provence in the north of the country. However our second flight of the day had been cancelled a few days prior, which actually helped us out a lot as now I had organised to be taken around Varirata NP. Sicklebill sorted out the flights which had been re-scheduled for the morning and all was looking straight forward and easy.

Well......when we arrived at Wapenamanda Airport there was a line of locals at the entrance to the small airport which hadn't been opened yet. And after some time we noticed an A4 bit of paper on the windows stating the plane had been taken over by the Enga Provence Rugby team. This was obviously frustrating for us, but the locals as you could imagine were not best pleased either, and being Papuan no doubt had an influence on their slight aggression towards the airport staff. The staff soon talked them down in a very professional manner and all calmness resumed. So for now it looked as if our plans would be changed dramatically, but our guide Max seemed fairly relaxed despite the situation. Max was on the phone to the governor but that didn't seem to do much. However when the provincial minister walked in and just so happened to be a passenger on the flight, he was made aware behind the doors of our situation, and after a long time with the plane now landed and off-loaded all of its incoming passengers, what emerged we could not quite believe. The ground staff had six tickets in their hands, and they were all for us. Being a tourist does sometime make a difference, and being a tourist rather then a local today, got us on our on time flight back to Port Moresby. Sheer delight ensued!!

Our driver Peter was ready to pick us up at POM and we very quickly made our way to Varirata NP, an unexpected bonus. As we had no guide, I was the designated guide and a brief visit to the lookout and then along the treehouse trail produced a lovely range of species, and for the first time significant numbers of birds, and to say it was enjoyable was an understatement.

Most amazing was the Raggiana BoP display, truly awesome what they were up to. A Growling Riflebird was also a sigh of relief, as was a Brown-headed Paradise-Kingfisher, and a large flock of birds contained the rear half that looked identical to a Canada Warbler, and was therefore a Goldenface, but moving ever away. 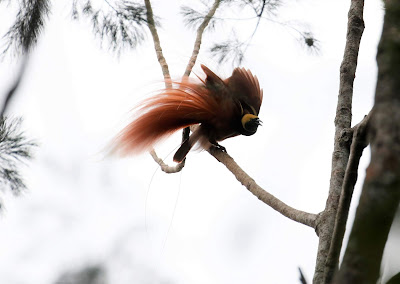 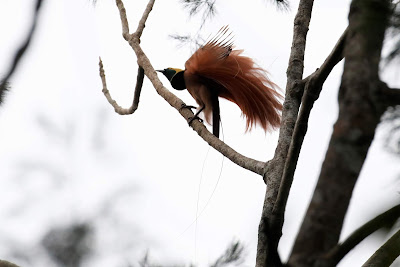 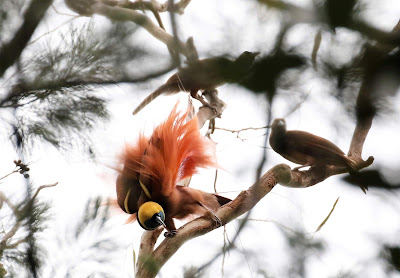