A thoroughly enjoyable day out in the east of the county. I started at 4am with my torch, but failed to find any targets before it got light. At daybreak I found myself along Penshurst Lane for the first time where I luckily had two Hawfinches fly east over me, these quickly followed by a Red Kite emerging from its roost. As I headed east, a brief stop at Brede High Woods gave me the expected woodland species and yet more Hawfinches, with one of the two showing nicely in the gloom feeding on beech mast.

Scotney GP was my most easterly site (though as usual I stopped along the way and found a Tree Sparrow at their favoured location) and soon found the superb trio of Long-tailed Ducks. Being low tide I wasn't in a rush to get to Pett and therefore walked inland from near Jury's Gap and found two Green Sandpipers on some excavations. Also of note were four Barnacle Geese with Mute Swans feeding in a kale field.

Pett Level was good as always with a family group of White-fronted Geese (adult and two juvs) being the highlight. A flock of 28 Avocets flew east offshore and a Great White Egret and a Ruff were also found with ease.

Rye Harbour was up next and I walked a long circuit from Winchelsea to Flat Beach taking in Long Pit and the beach road. On Long Pit the Black-necked Grebe was present, and a total of three Goldeneye were found across the various pits, though I failed to locate the Long-tailed Duck. From Denny's hide the Smew was thankfully still present and was a swift reminder that this is my favourite species of duck to see in Sussex. Sadly the flocks I saw at Northpoint GP when I first started birding will no longer exist. A small flock of gulls beyond the Smew consisted of five Greater Black-backed Gulls, and just off to the right sat a very smart second-winter Caspian Gull that soon flew out to sea.

I had intended to finish off at Castle Water for the roost, but with light drizzle I decided to head back home via West Rise Marsh. A quick jaunt provided flight views of two Water Pipits, and probably my best ever views of four Bearded Tits. On my way back to the car I flushed two Water Rails. My final stop was a return to Tide Mills, and armed with my torch I finally found a Purple Sandpiper on the last bit of concrete I checked. 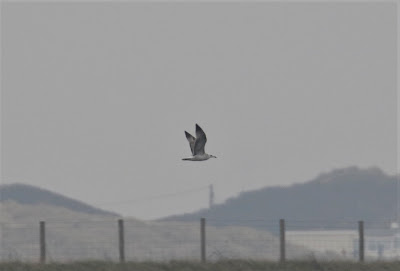