Again a cold morning but with constant sunshine it felt slightly warmer than last week. However this didn't effect the amount of birds being seen. Again very quiet on all fronts, though a flyover Kite was good to see. 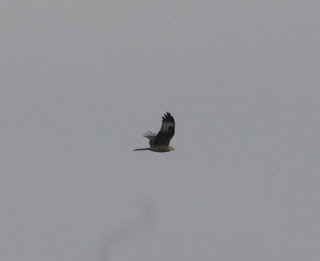 Red Kite over Cuckmere﻿
Posted by Matt Eade at 03:57

Another cold morning on the patch produced just a single Wheatear on the 18th fairway. Scanning over to the scrape didn't reveal any noticable Waders, though they could well have still been there.

Afterwards a quick look at Splash Point produced 3 Harbour Porpoise and 6 Sandwich Terns, plus a Mute Swan on the sea. 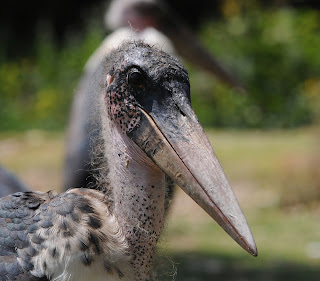 A bitterly cold wind on the Head late morning. Fortunately there were a couple of things of note though still the bushes held nothing. A few Meadow Pipits were the only birds noted flying in off. 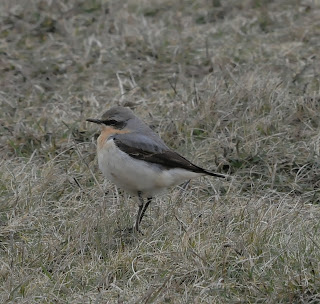 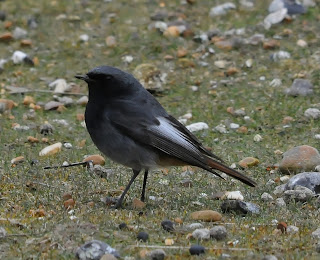 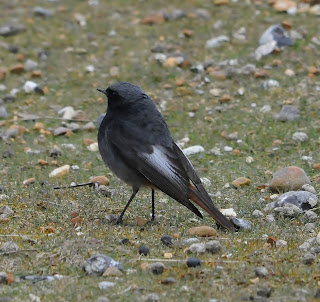 Another useless morning out on the patch. Started with a seawatch for an hour but it was very quiet. A quick wander up on the Head after produced a single Chiffchaff in Hope Gap which very quickly headed north and a Scandinavian Herring Gull in the sheep field. 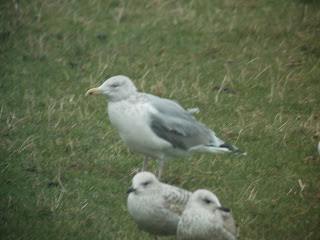 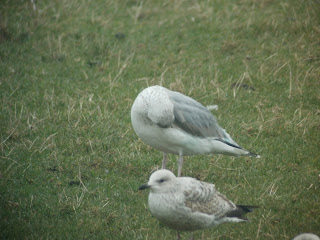 Only half the circuit was covered this morning as the northerly wind was very cold and yet again the bushes were devoid of migrants. However in Hope Gap was a lovely male Wheatear. Getting close to it however was a bit tricky so not the best photos were taken. 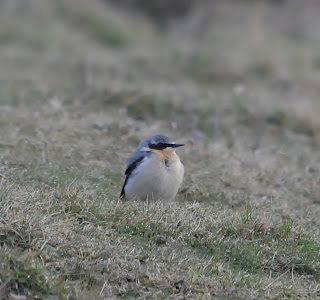 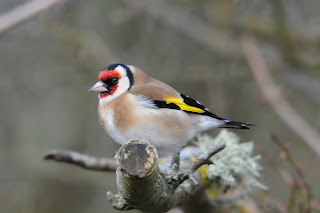 Goldfinch
Posted by Matt Eade at 01:38

Walked all of Seaford Head this morning in what seemed ok conditions for some new arrivals. There was a Goldcrest in Hope Gap and a Pied Wagtail and few Meadow Pipits flew in off, and that was it. A few groups of Brent Geese passed by heading east but no huge numbers.

This day last year I had 6 Wheatears and few Chiffchaffs on the Head.

Had to park at the bottom of the hill today as 3ft snow/ice was covering the track up to South Hill Barn. Still no signs of spring on the Head with actually very little of note, I guess the continental weather is playing some part in that.

The Woodcock was still in Hope Gap along the new ride but other than a Common Seal at the river mouth, there was nothing of any note. 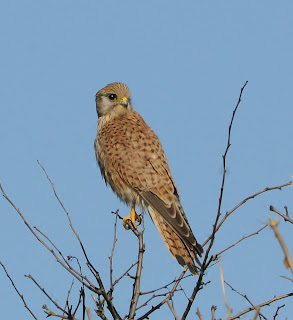 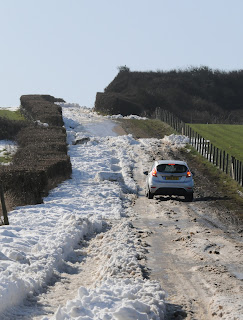 A great weekend spent with Jake on the freezing cold wind strucken North Uist with the hope of seeing the long staying Harlequin Duck and two species of Geese.

We left Friday night at 9.20pm and arrived at Uig (Skye) at 11.30am. We shared the driving along the way but were both completely nackered so a quick nap at Uig was very welcome. The wind was rediculously strong and very cold, but thankfully the ferry was still running. 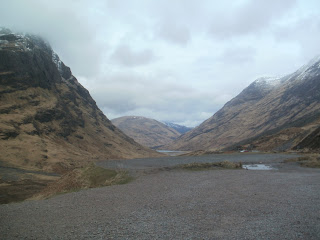 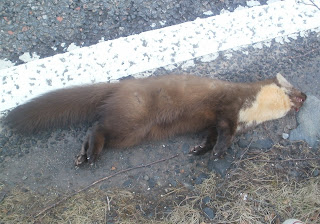 dead Pine Marten nr Fort William
After nearly missing the ferry, we were finally on our way to Uist. Our hire car was waiting for us at Lochmaddy though not as ready as we had liked!! We would have taken our car but we didn't book the car and there was no room on the return journey. Anyway we arrived, the guy showed us our car and I instantly noticed a flat tyre. After some discussions the hire people gave us their car and we were soon on our way to Balranald RSPB, not breaking any speed limits obviously to try and connect with the Duck before dark. 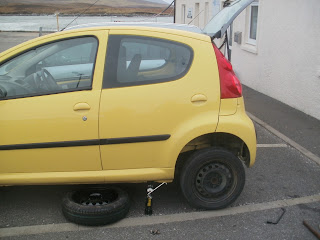 At last, after 20 hours we had arrived at the RSPB reserve and were walking very quickly to Traigh Lar where thankfully a small group were already present, and to our relief were watching the Harlequin Duck. It was feeding 80m out but throught the scope it looked amazing, and when we approached for closer views it was even better, result!!! Also present were 2 Snow Geese with Greylags, Glaucous Gull and a Hen Harrier. 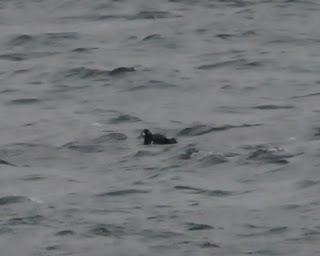 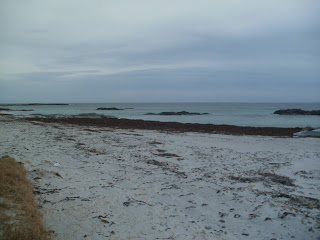 We spent the night in a hostel near Lochmaddy and had a great nights kip, despite the wind nearly lifting the building. On Sunday we again went on Balranald RSPB though we didn't see the Duck again. However there was an incredible sight of at least 4 White-tailed Eagles perched on the ground and some flying around. The Richardson's Canada Goose finally got found by Jake with lots of Barnacles, a female Merlin and 60 Twite were the other highlights. 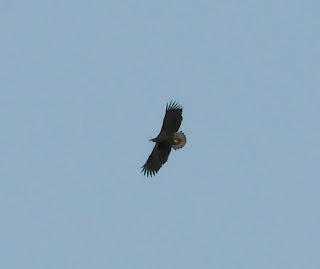 At the ferry terminal, an Iceland Gull was lurking about but nothing else was seen back to Uig. Despite several snow showers on our return car journey, it was pretty uneventful though an adult White-tailed Eagle was seen on Skye, a Dipper and some Whooper Swans near Fort William. We arrived home at 1.15am, just under 12 hours in the car from Uig. ﻿
﻿
﻿
﻿
﻿
Posted by Matt Eade at 04:24

A great seawatch this morning between 6.15-9.45am. Brents are now finally starting to move, and with south-easterlies forecast all week there could be a mass movement .....hopefully!!

A quick walk on Seaford Head after produced only a couple of Meadow Pipits flying north. The nest boxes were getting some attention already. 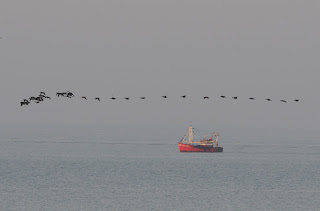 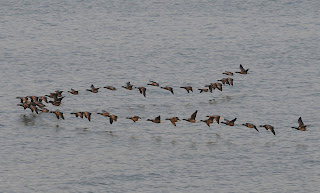 Brent Geese past Splash Point﻿
Posted by Matt Eade at 04:28

A quick visit on the patch to put up some next boxes produced a 'flushed' Woodcock.

Other than that plenty of bird song, but as it is with early March, the thought of the first Wheatear in this 'milder' weather will keep me on the patch for most of this week, however at the back of my mind I clearly know it will be another couple of weeks yet.
Posted by Matt Eade at 10:49

Decided to have a quick walk on the patch this morning and was not surprised to see Hope Gap with slightly less trees in it. However the damage is much more than last year and I'm just hoping this isn't going to continue every winter as Hope Gap has proved to be an important area for migrating birds.
On the plus side of things, these extra pathways will provide extra viewing of the area, and with hopefully no dogwalkers entering these areas, it could prove to be very productive.
﻿ 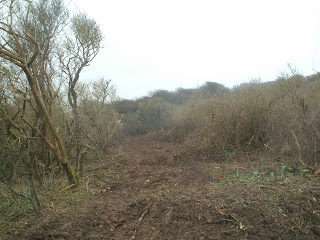 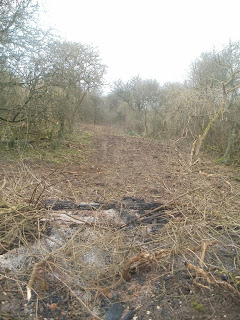 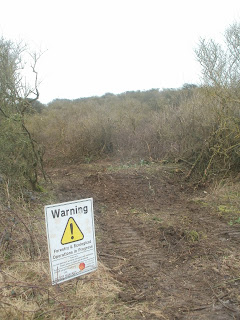