After overnighting just outside the park at the rather expensive Touch Star Resort, we started the day earlier as we had to drive up to the summit marsh. Hats and gloves were in order as this site regularly has frost, however the wind kept that away today. Birding was difficult around the boardwalk, despite the first bird being a Snowy-browed Flycatcher on the steps. We maybe did three laps over a three hour period, but frustratingly in this time we failed to find a Dark-sided Thrush, however only one has wintered this year. A Pygmy Wren-Babbler was good to see but highlights were few and far between.

After being tourists for a little time at the highest point in Thailand, we descended back to KM 37.5 and again birded the Jeep trail. As soon as we entered we encountered a bird wave, and in an hour we must have walked only 50 metres. As good as this sounds, seeing everything was impossible and nothing stayed still for long. A Clicking Shrike-Babbler was by far the highlight here. A Tesia would’ve been the highlight if one had shown instead of being out of sight constantly. After nearly three hours here we descended to KM 13, but in theory we should’ve stayed around the summit to clear up on what we’d missed this morning.

From mid afternoon to dusk the area around KM 13 was quiet, but eventually a few nice bits were encountered, with the highlight for me being a trio of Woodpeckers in one tree, these being Black-headed Woodpevker, Greater Yellownape & Common Flameback, the latter being a new bird.

Unfortunately we leave this NP tomorrow but in theory bigger and better things await. Another day in Doi Inthanon would’ve been brilliant, but there never is enough time. Also tomorrow Jake sadly leaves us as he flies back down to Bangkok. 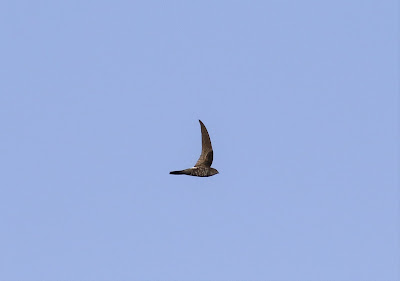 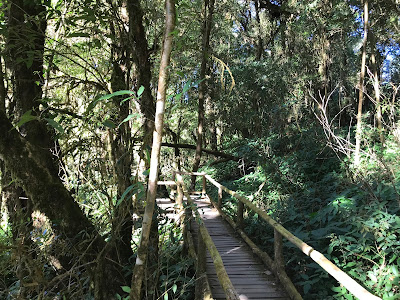 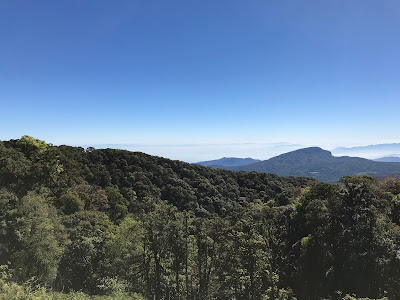 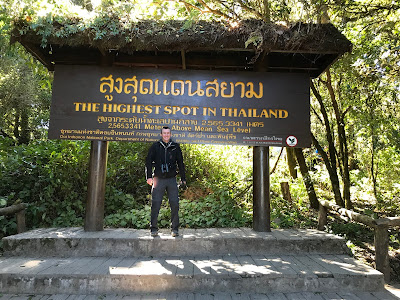 We left Li at 5.15am and arrived at the Blossom-headed Parakeet conservation area just as it got light.   We viewed the area from an observation tower and for half hour enjoyed the views and the birds in equal measure. The presumed owner arrived with is suitcase of a stereo player and blasted out the calls of the Parakeet.

Eventually a small group were seen bolting it over to the other side of the valley, but thankfully a smaller group landed in some trees close to us and showed nicely. With this in the bag we headed into the NP with one of our main targets today being a species of Forktail. First up were a series of waterfalls, and with the area being quiet from tourists, there were none to be seen, however some Plumbeous Redstarts and White-capped Water Redstarts were very nice to see, especially the latter. We moved higher up into the park stopping just after the second checkpoint at 37.5KM where a very narrow trail led into the forest.

Although this trail is short we spent a couple of hours on it as there were regular species flocks moving through, and the already annoying Slaty-bellied Tesias failed to show despite several singing away. Flycatchers stole the show for me here, with both White-gorgeted and Little Pied Flycatcher being seen. The species flocks consisted more so of Leaf Warblers then anything else, with Davison’s being the first to be identified, whilst Claudia’s was a retrospective second.

Next up was another Waterfall but still no Forktails here, but still some good birds with the highlight being a stunning Rufous-bellied Niltava. Again the Leaf Warblers featured causing her more id headaches, on top of the already dehydrated and hunger headaches. With it now being mid afternoon we concentrated our efforts around Vatcharitan Waterfall, but with so many tourists it was inevitable we would fail, and so the much quieter Sirithan Waterfall was chosen. Viewing here was difficult so I walked down onto the river edges and straight away flushed a Forktail. I got the attention of the others by my typically panicking actions and using the laser pointer as some sort of distress signal. Thankfully they joined me quickly with Ian acting more like Tarzan swinging down the slopes. The stunning Slaty-backed Forktail performed for a short time before disappearing. It wasn’t until much later that we saw the bird again, with it this time showing closer but never hanging around.

A big relief so now we can concentrate  plenty of time in the forests with still plenty of targets left to find.

Woke up very tired in our very nice hotel. This wasn’t ideal as today was mainly a driving day, however first we wanted to do a boat trip on the lake to hopefully see a Baer’s Pochard. Arriving at the White-eyed River Martin monument it was frustrating to not see anyone to take us out, but thankfully the local birder saw us and offered to take us out. Although time was not on our side today we couldn’t refuse and were soon heading east along the southern shore.

There were stacks of birds on and around the lake and after an hour of plodding along, we stepped onto dry land where in the next pool were half a dozen diving ducks and.a couple of dabblers. After a tense wait a Drake Baer’s Pochard was picked out and we enjoyed satisfactory views of this very rare bird. Two critically endangered species In two days can’t be bad. We sadly had to go to make it to Mae Ping with enough light left. On our return to the boat yard the driver took a detour through some pads and flushed out a White-browed Crake, and nice added bonus.

From here it was a solid four hour drive to Mae Ping NP via a coffee break, and we made good time and arrived with plenty of light still. It was very strange speeding up to a police car, undertaking him with my seatbelt unfastened before going back into the outside lane, another reason I love Thailand so much.

Although Mae Ping started badly with hardly a bird to be seen and me wishing we had gone elsewhere, it all came alive. Firstly I taped in a White-bellied Woodpecker, and from there on every target gave itself up incredibly quickly, including the often elusive Yellow-footed Green Pigeon. Other goodies like Collared Falconet, Grey-headed Parakeet and the quite stunning Black-headed Woodpeckers were soon added, and by the time dusk settled in, we had pretty much had a clean sweep. It doesn’t get much better!!

As I was tired I couldn’t face another two hours of driving so we’re staying the night in Li, before hitting Doi Inthanon tomorrow. A very meal was had nearby, I can never tire of Thai food. 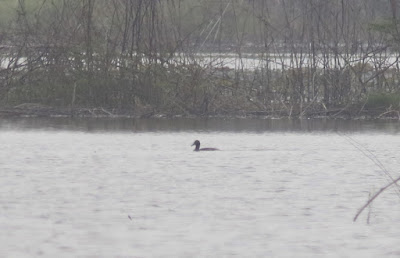 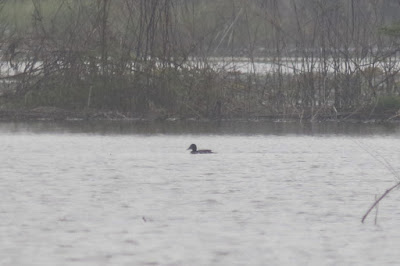 The evening before another birder had seen a Spot-winged Starling with many Chestnut-taileds above the restaurant, and so after our look at the lake side at dawn finding some Bitterns and Crakes and a stunning Stork-billed Kingfisher, we set about finding the Starling. Thankfully the Chestnut-tailed Starlings had returned and it didn’t take too long to find the female Spot-winged Starling. Not only this we lucked upon a Purple-backed Starling and a couple of White-shouldered Starlings.

Jake went off to see the Sibe Rubythroat again whilst  Ian and I stayed in the gardens hoping for the Violet Cuckoo but we had to settle with the standard birds. We were then informed that our next site (Samnak Maiteng Res.) was flooded and therefore our potential targets would be near impossible to find. This therefore meant we could take our time at Petchaburi Rice Fields and then change our plan by heading for Bueng Boraphet Lale instead where a couple of the critically endangered Baer’s Pochards have been seen very recently. Andy Pierce also kindly gave me coordinates for some Yellow-breasted Buntings, something we were very thankful for. This did mean losing a half a day but it has so far worked in our favour.

It didn’t take long to reach the rice fields and after a long circuit of good looking habitat we eventually found our target, and plenty of them, at least 80-100 Yellow-breasted Buntings!! This was brilliant to see this near-threatened species, and we soon found why. Whilst doing a circuit we came across some illegal mist nets. I wasted no time in getting Ian’s knife and tearing the things apart whilst Jake extracted a Baya Weaver, and I did the same with a Streak-Eared Bulbul. It was good to do our bit, but unfortunately were too late for two Scaly-breasted Munias that had died in the nets. What was even more depressing was being sent a video from a Thai birder we had met there that the farmers had burnt down all the bushes in which the Buntings were using to make them scatter from their fields........very depressing.

The Thai birder mentioned above had come to twitch the Jacobin Cuckoo that we saw with ease, but we weren’t too bothered by it in all honesty. We did more circuits around the rice fields catching up with several Grey-headed Lapwings and a Pink-necked Green Pigeon.

We then started the long drive north, eventually arriving six hours later at Nakhonsawan, and was my first proper bit of driving over here, and I loved it. Weaving between traffic and beeping lots was my type of driving. We checked into a plush hotel and fell asleep instantly being now completely exhausted after six full days in this lovely country.

Highlights for the day with lifers displayed as (L) after the species: 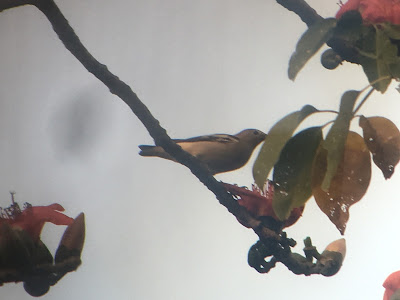 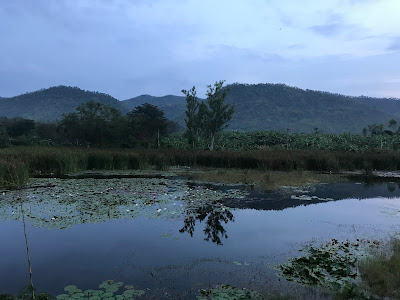 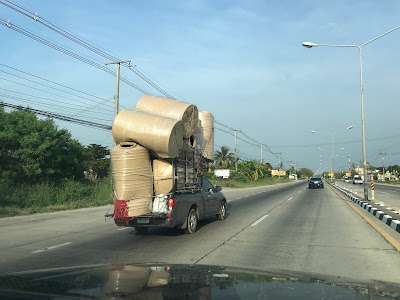 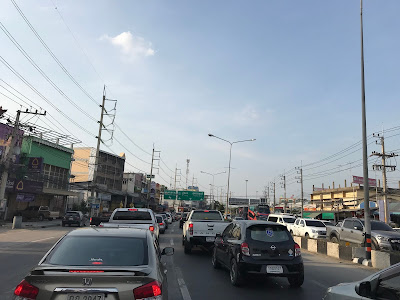 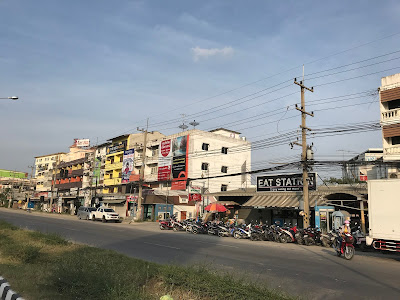