What had looked to be a promising week for seawatching actually turned out to be fairly poor. That was until today where for once a decent wind gave a decent return of birds, and especially Skuas where there was one less seen today then the 70 on Monday. By far the highlight today was an exceptionally close Great Northern Diver, so close in fact I didn't have time to fetch my camera, but thankfully Simon further down the beach managed to. Also the first Black Tern was seen, at long last some Common/Arctic Terns and a nice passage of Manx Shearwaters.

An interesting sighting for the day was a drake Common Scoter with lots of white on the upperwing, and this bird was first spotted today along Chesil Beach, Dorset, and roughly four hours later at an approximate distance of 120 miles the same Scoter flew past, apparently an average speed of 30mph (thanks to Paul Harris for details). It was seen later past Dungeness.

Afterwards I nipped round Mum and Dads and spotted a Swift flying towards the town centre. Despite having no bins, it looked like a Common and nothing rarer.

Totals for today are as follows:

Its been an interesting week elsewhere, on Tuesday with Marc Read, a female Marsh Harrier flew over Seaford Head, and when doing the washing up at home (yes I'm a good house wife), a superb Cuckoo landed in the garden. Sadly it all too soon flew, no doubt put off by my bright yellow gloves! A couple of evening visits to the Cuckmere has produced very little of note.

A rather productive seawatch today that was completely dominated by Skuas, with over 70 recorded including 13 Pomarine Skuas with the largest flock being six. Some other good totals and species were seen and at long last Little Terns were moving, with a total of 24 seen consisting of only four flocks. By late afternoon the wind had completely dwindled despite a moderate SE breeze all afternoon, but I was quite glad as 13 hours today was more than enough, with an expected three more days of hard graft down at Splash Point to come.

What was interesting was the totals from Birling, who watched for half the time but recorded similar numbers to me. This was no doubt down to the murky conditions out to sea, which means the birds angle into the south coast to try and find land so they can navigate along it, rather than finding the land much further west and coasting past us. Often I was scanning around to the east and finding birds that had not been seen by people looking straight out. This means the further east you are, the more birds, especially in murky conditions.

Afterwards a short visit to the Ouse Estuary Project provided nice views of both Sedge and Reed Warblers.

I started the day up Seaford Head hoping for some migrants to have been dropped in the early moderate northerly wind. The wind obviously wasn't strong enough and a short circuit found only a Willow Warbler.

With Paula, I then walked from Saltdean to Castle Hill NNR via Balsdean where there was an average number of Early Spider Orchids in flower, and other then a hear-only Yellow Wagtail flying over there wasn't much of note. When walking back a couple of Poms had been seen at Dunge, and so it was a brisk walk to the car, throwing Paula out of the car once home and then rapidly arriving at Splash Point a short while later. The first of hopefully many Pomarine Skuas flew past, and strangely there was a short period where Great Skuas were dominating the sightings.

Yesterday afternoon me and Paula walked south from Southease to Piddinghoe where a stunning male Whinchat was on show, as were three Common Sandpipers. 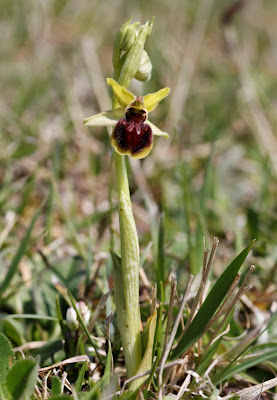 A very busy week with work meaning I haven't been able to do much, although most evenings down the Cuckmere or Splash Point have just about been worth the continued tiredness.

The Cuckmere this week hasn't been that great although the Great White Egret showed well on the scrape earlier in the week, along with a Bar-tailed Godwit and the single Brent Goose, whilst a Fieldfare was by Foxhole Farm. Three Egyptian Geese were present last night.

Another afternoon seawatch on the 17th April between 15.50 - 19.20 produced the following, with a close flock of Eider being by far the best views I've had recently:

Promising conditions and certainly the best seawatch for a week or so. For the first two hours the passage was very good with a drake Scaup and three Manx Shearwaters being the undoubted highlights among the throng of Common Scoters piling past. With such a strong Auk passage I was too hopeful for a Puffin, and with two passing Dungeness it certainly felt as if our chances had gone, and so that was the case. News from the west of a few Garganey coming our way kept the enthusiasm up but all too soon the passage dropped considerably, and with the wind turning NE it was over until next time. Some great variety today with scarce species such as Black-tailed Godwits and a Barnacle Goose making the grade, and once again great company alongside Richard and David during the quiet periods.

After a fruitless morning walking Seaford Head and then a brief spell down Splash Point producing just a Whitethroat of note, I was mightily pleased to get a phonecall from Nick Pope as he had found a Kentish Plover on the west side of the Lower Cuckmere.

Being a mega patch tick I was quickly on site and getting distant views from the western path, but soon closer views were had from the riverbank. The Kentish was associating closely with four Ringed Plover and two Dunlin, whilst a Grey Plover and Greenshank were also present.

This was the 8th record of Kentish Plover for the Cuckmere since 1960, and the first since 1991, and if the water levels are maintained as they are currently in the coming months or years, the scarce Wader list could increase dramatically. My feeling is, if the Cuckmere can attract birds such as Baird's Sandpiper (2017) & Semipalmated Sandpiper (2018) during non-suitable water levels, then the potential for great habitat is immense. 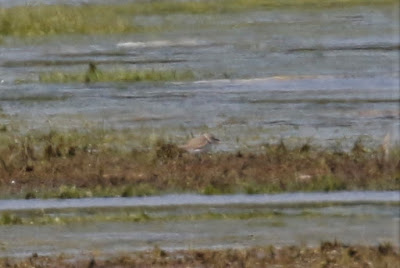 Today (13th April) was utter dire on the patch. A morning circuit around Seaford Head didn't produce a single migrant, and a brief seawatch afterwards was equally poor. I then walked a couple of good looking Dotterel fields to the north of Denton where many Corn Buntings were present.

After a quick late morning nap, I noticed the wind had switched to an easterly, and very briefly went SE during my 1.5hr seawatch at Splash Point with the following birds seen:

Last night the Great White Egret was finally seen on the scrape where it showed well. 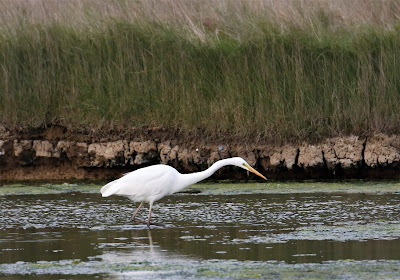 A brisk walk down the Cuckmere this evening produced a smart White Wagtail and Little Ringed Plover on the meanders. The scrape had not held onto the trio of Great White Egrets from the previous evening, but an Avocet was present. Unsurprisingly there were no passerine migrants present, the combination of the cold wind and very clear conditions not helping here.

A slight northerly breeze coinciding with low cloud across the headland was a perfect recipe in early April for the first smattering of summer migrants to be found. Before I had even seen my first migrant this morning, whilst walking, my mind went back to the 8th April 2008 where I had a good number of migrants including a 'reeling' Grasshopper Warbler, and whilst recollecting this, on the SW corner of Hope Bottom a Grasshopper Warbler started 'reeling'. I eventually obtained reasonable views. It then became apparent that there was an overnight arrival and over the course of the morning a nice number of common migrants were found.

Afterwards me and Bob walked the Cuckmere and found a showy male Black Redstart, a singing Sedge Warbler, Wheatear and a couple more Willow Warblers whilst a male White Wagtail was along the river.

Yesterday I had a lazy day and only ventured down the Ouse Valley walking from Southease to Piddinghoe but could only come across a Wheatear and 90 Corn Bunting that flew south presumably to roost.

A day that had been on my radar all week with full on south easterly winds forecast for all along the channel, and thankfully it didn't disappoint with plenty of variety, and some significant numbers involved with certain species, though once again Brent Geese numbers were very low. The wind was particularly strong for the first few hours, but when it dropped by late morning, the Terns moved in force, that included a surprisingly high number of Common Terns. A flock of Avocets and Eider were my personal favourites for the session, though watching the mixed Tern flocks was great to see.

Towards the end of the eight hours the passage eased off somewhat and I reluctantly left, however knowing I was only 45 Sandwich Terns off from the thousand mark, I may have stayed another half hour.

A Splash Point first for me was purchasing a new telescope, courtesy of David Williams who had noticed my cry for help for sometime now. No more complaining from me now on this matter. 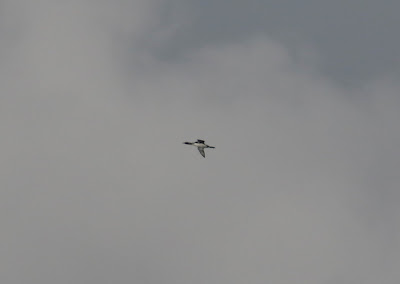