A quick hour was spent this morning amongst the superb ancient Beech woodlands in Surrey. The abundance of orchids was impressive, especially the crispy Bird's-nest Orchids. However, I was after the Narrow-lipped Helleborines present there and I was again surprised to find a large number. For such a rare orchid, I gave up counting at 30 individuals, which included some impressive specimens.

I last saw Narrow-lipped back on 29th July 2013 in Buckinghamshire, so another search for this species was well overdue.

Also present were many Broad-leaved Helleborines in the open areas, lots of gone-over White Helleborines, and my first, Yellow Bird's-nest, which isn't an orchid, but similar to the family of broomrapes. 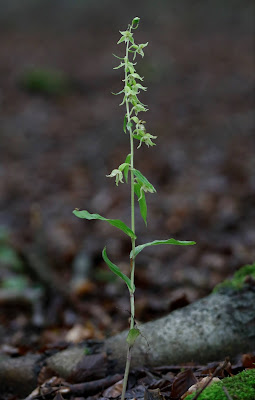 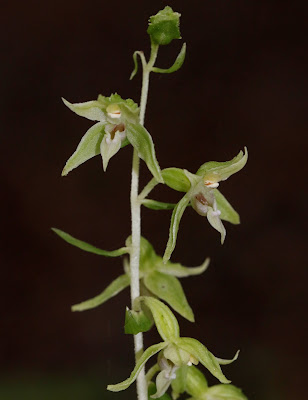 I've got a few days back down in Sussex, and with only a few hours remaining after driving down from Hampshire, all I had time for was to head to Newhaven Harbour at low tide. A few gulls were present and included a juvenile Yellow-legged Gull, two immaculate juvenile Mediterranean Gulls and a Kittiwake. Fingers crossed the Cuckmere over the next few days is more exciting.

Last week was spent in the Lake District with Sara where we couldn't have asked for better weather for a number of activities, mainly hiking, kayaking and wild swimming. During the trip, I hurt my knee to an extent where I needed a rest day. Therefore, I took this opportunity to head south to Ainsdale Dunes in Merseyside to hopefully find the colony of Dune Helleborines there.

It was a two-hour drive, and early on, the temperature was already soaring on site. Sand dunes are tricky to search and there are constant undulations and I hadn't a idea of where to start. The expanse of the dunes was also unexpected, so I knew it was going to be a long quest. I knew this year had been a good season for Dune Helleborines, but it wasn't as easy as I'd imagined.

Anyway, after three hours, I finally found one and it was thankfully in good condition, meaning I didn't have to find anymore. It was great to see a few Grayling butterflies and some enormous Broad-leaved Helleborines in amongst the pine trees there.

I then walked back along the sandy beach, back to the car and onwards to the Lakes to enjoy the few days remaining there. I was aiming to go back via a Dark Red Helleborine site, but didn't in the end.

In the Lakes, wildlife is very sparse and only a Ring Ouzel on Esk Pike was notable, whereas dragonflies comprised Common Hawkers, Golden-ringed Dragonflies and Keeled Skimmers. 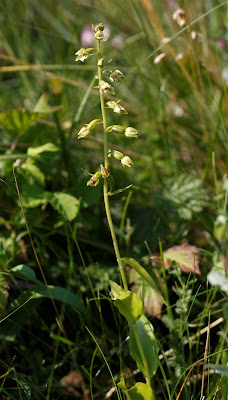 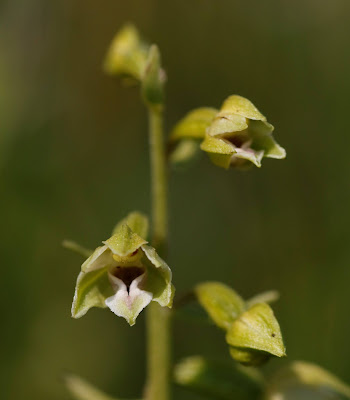 Last weekend was probably one of the most memorable from a botanical side of things. For years, I've been long wanting to see a Red Helleborine, whether it'd be in the UK or on the continent, especially after failing with the latter on multiple occasions.
The status of Red Helleborine is not quite as extravagant as Ghost Orchid in the UK, but it still acquires its mega status with only four flowering plants at one site in 2021, and very few, if any, in recent years. With twitter in past weeks raging on about a handful of flowering Red Helleborines, it was an absolute privilege to head to a little-known site in the Chilterns, which is probably the last site and with only one plant in flower when I was present.
Not only was this the last individual, it was in perfect condition, though shaking with adrenaline made it difficult to hold the camera still at times.
Red Helleborines are very critical on light levels, so volunteers each year cut off any overhangs to ensure the correct light levels are maintained. However, a number of other factors play a key role in the flowering of orchids, and seemingly, this year has been unprecedented with other species of orchids sprouting up all over. This species can also lay dormant for years, emerging if conditions suit and only flowering in the very best of conditions. Unfortunately, luck isn't on its side, as the pollinator of Red Helleborine apparently doesn't exist in the UK! These reasons accumulated makes me realise how fortunate I was to see this superb orchid! 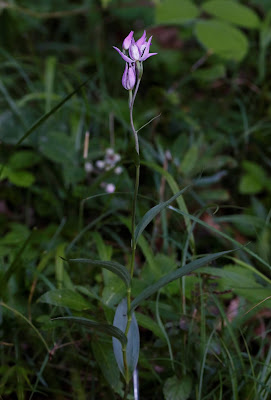 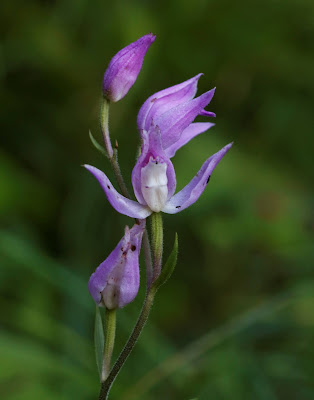 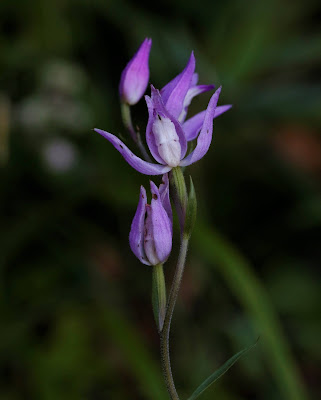 It felt like I had been away an eternity, probably emphasised by not going abroad (like everyone else) for a while now!

Having cleaned up on the dragonflies in the west, Dad and I made tracks to the mountains of the Cairngorms, stopping off to find a small colony of Coralroot Orchids. Although I had seen this distinct species before in Cumbria, I was staggered by how tall these specimens were. The sun had emerged from behind the clouds so we quickly made our way to Loch Garten where we found more than a trio of White-faced Darters, but they were very flighty allowing poor photographic opportunities. The Northern Damselflies were easy as per usual, so we then did some more orchid hunting, finding two sites for the delicate Small White Orchids – a new species for me and very welcome after previous dips.

Unsure now what to do, we opted on the Findhorn Valley as the cloud wasn't too low and Dad was keen to see Mountain Hare. Arriving at the usual car park, we weren't too sure where to go, so we opted for 'up and over'. A Mountain Hare's ears were seen bounding off over the hillside, but by far the highlight was a stunning near-adult Golden Eagle which swooped low over the hill and was watched flying off into the distance. A Red Grouse and several toads were also seen. 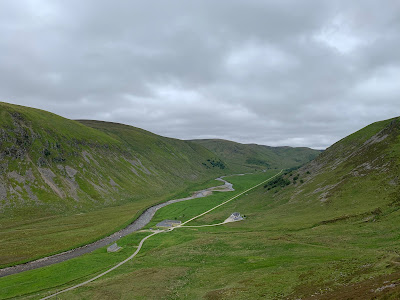 The weather had sadly not improved for our day planned in the mountains, which was a great shame as I was keen on showing Dad some Ptarmigan, but we still had a decent day in poorer conditions. Our visit to Loch Garten for the Ospreys was pointless as there were no Ospreys breeding this year! So, we quickly went back and photographed the Small White Orchids which were pure class; we then spent a decent hour getting a series of lovely photographs of the Northern Damselflies.
We then walked a long circuit around Abernethy without finding a single Crossbill (!), nor much else for that matter, so we headed up to another valley where Dad got a better view of a Mountain Hare! It was wet and windy so we gave up for the day and made plans for the following day. 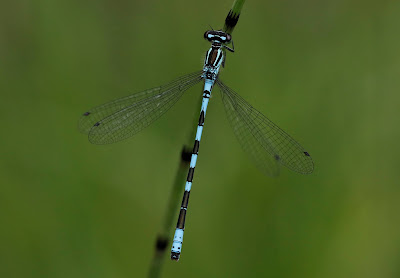 What turned out to be our final day, today I drove the whole distance from Grantown-on-Spey to Seaford, with two stops: one for the Slavonian Grebes at Avielochan and the second at a site in Cumbria for the rare High Brown Fritillary. The Slav Grebe was stunning and showed really well (my camera was packed away), while the High Browns were difficult to catch-up with. We saw at least two, but with many Dark Greens on the wing and the temperature increasing, making a positive ID wasn't easy. However, the two that settled were much appreciated by us.
So that's that, a lengthy time away resulting in seeing an incredible diversity of wildlife, starting off with the Black Hairstreak and ending with the High Browns, with so much packed in-between, for which I feel very lucky to see. It was great to get Dad away from home, and hopefully the next time we go the weather may have improved.