Myself, Jake, Ian, and Ashley Howe assembled in the early hours (after twitching the Royal Tern only a few hours earlier) and made our way up to LGW for our flight to Funchal. We landed a few minutes late, grabbed our hire car and drove straight to Machico Harbour, which was the launch pad for our pelagics.


After photographing the endemic Madeiran Wall Lizard and having lunch we assembled on the harbour wall to be greeted by Hugo, and joining forces with Dan Pointin, Josh Jones and Pierre. Donning life jackets we were soon on our way out on a very small but surprisingly comfy vessel, bound today to the area north of Madeira, an area supposedly good for Zino's Petrel.

It had taken roughly 3 hours to reach the area through firstly calm seas, then full on chop with all of us getting a full on wave land in our laps, to then a steady area that Hugo quickly exclaimed as being perfect sea conditions. Fairly quiet observation wise on our way out finding only a single Desertas Petrel, a good number of Bulwer's Petrel and two Loggerhead Turtles.

The first of four 'balls' of frozen chum was dumped overboard and over the next 3-4 hours we rolled about initially not finding a great deal, however by the end we had conjured up a fantastic array of species, whilst Pierre had conjured a fair amount of extra chum......! I however felt surprisingly good all the time. The bird activity wasn't constant however the first Pterodromas soon appeared that initially were all Desertas Petrels, but soon a smaller Pterodroma was spotted alongside two Bulwer's being an almost identical size at some angles, and with good views it became obvious this was our main target, the endemic ZINO'S PETREL. A huge relief personally to set eyes on this species, and ten years overdue as my last Madeira trip had been cancelled. Bulwer's and the odd Cory's kept us entertained between bouts of Pterodroma activity during the quiet periods.

Our luck continued into the evening with Storm-Petrels as we recorded four species, with the most pleasing being the majestic White-faced Storm Petrel, yet another target and this rounded up all of our targeted seabirds on our first of three pelagics. With this mission complete we sailed for 1.5hours back to Machico Harbour finding only good numbers of Cory's Shearwaters. 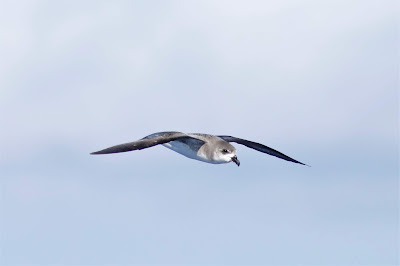 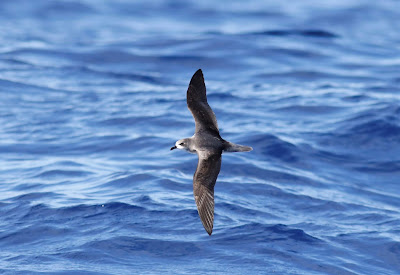 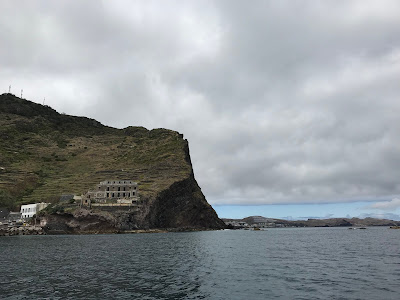 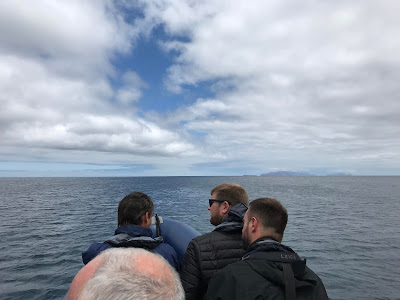 Thursday 21st June
A lay in on Thursday was most welcome and after a decent street cafe breakfast we made our way ten minutes up the road to the Palheiro Gardens, a known site for not only seeing, but photographing the endemic Trocaz Pigeon and Madeiran Firecrest. Wandering around for a couple of hours soon yielded both species. The Firecrest showed better then expected when a pair got into a tangle after a prolonged dispute and both fell to the ground latched to each other. Ashley saved the day by fetching both up and it's fair to say satisfactory views were had in the hand. Trocaz Pigeons were seen in good numbers both on the deck and in the fruiting trees.

After some rest we took to the open ocean again, this time heading south towards calmer waters then yesterday. The journey out was initially halted to watch a pod of Bottle-nosed Dolphins playing about, and then what was probably my highlight of the day was observing a decent pod of Short-finned Pilot Whales including a mother holding onto its dead calf.

We stopped around 18 miles out and using the same tactic as yesterday proved much quieter in this area. There were however good photographic opportunities with plenty of Bulwer's Petrels to choose from. A few Pterodromas passed through during the four hour vigil, but it wasn't until our rapid return we observed a Zino's Petrel doing a couple of close fly pasts. Unfortunately the camera was put away. Lastly a young Blue Shark took a liking to one of the frozen bait balls and was seen a couple of times. 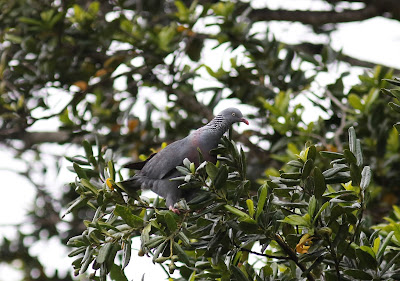 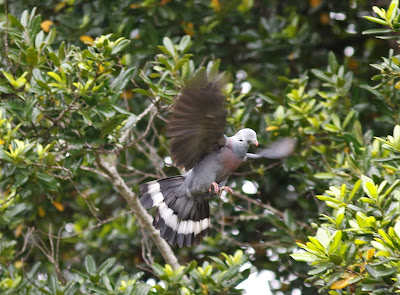 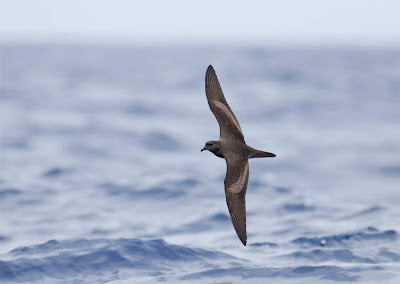 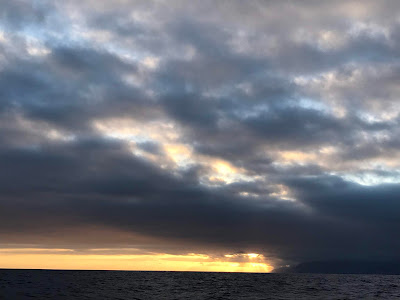 Friday 22nd June
Another lay in on Friday and after breakfast we went to the Jardin Botanica to get some better photographic opportunities of the Firecrest. This was semi successful but still far from perfect although the Madeiran race of Chaffinch obliged slightly better.

After lunch we set off back into the Atlantic, this time heading north to the same area visited on day one of the pelagics. As usual on the way out most of us got soaked but it was still good fun. The sea was much calmer today but still productive enough for a White-faced and Wilson's Storm Petrel to hang around us for most of the time. Still activity wasn't anywhere near like day one with only a few Pterodromas seen, however one of these was a Zino's Petrel whilst all the others were identified as Desertas Petrels.

Heading back to Machico was rather quiet and once back on dry land having completed our last pelagic we moved up on top of the cliffs south of Machico which is an area known for Barn Owl. However it was past dusk and therefore we were pushing our luck and didn't see anything. So with this it was time for my most anticipated moment in Madeira, that initially involved a 45-minute drive uphill to Pico de Arieiro arriving shortly before midnight. From here we walked the ridge that after twenty minutes arrives above the Zino's Petrel colony. It was rather gloomy with low cloud covering the mountain ridge, however we soon heard a couple and then had a close fly-by of what was presumably a Zino's. A brilliant experience and all now I was wishing for was to visit here during the daytime. 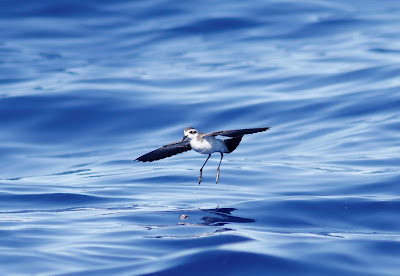 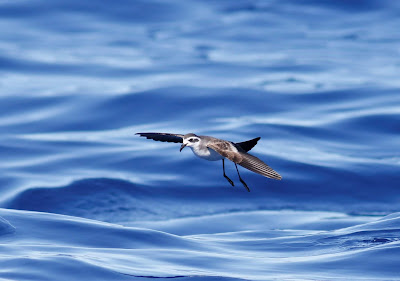 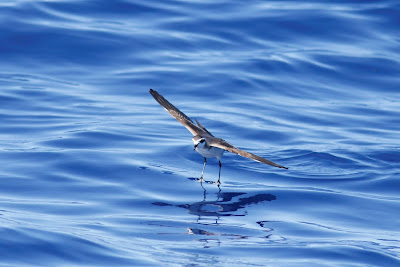 Saturday 23rd June
After a nice lay in after the early morning antics, we drove to the most easterly point on the island, namely the area around Ponta de Sao Lourenco. Although no new birds here there was interest in local races of birds, here including Berthelot's Pipits, Rock Sparrows and Spectacled Warblers. Good views were also had of Plain Swifts. Me being me I wanted to walk off up to a high point away from the tourists, and had great scenic views of the area.

The afternoon was chilled out with a big lunch in Machico then watching football. The evening however we had set the target of seeing a Barn Owl. We arrived once again above Machico, and once darkness fell a Barn Owl was observed flying around the cliffs, before doing a very close fly-past. Success!! 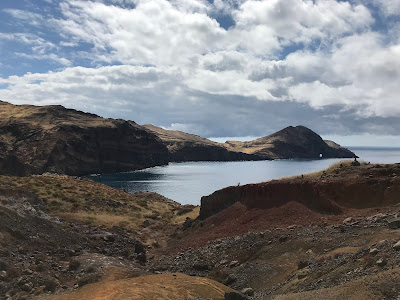 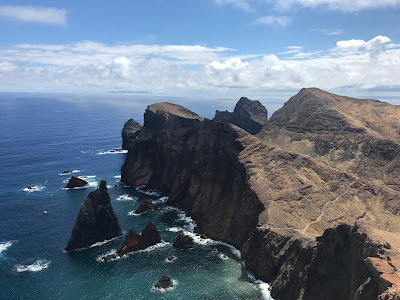 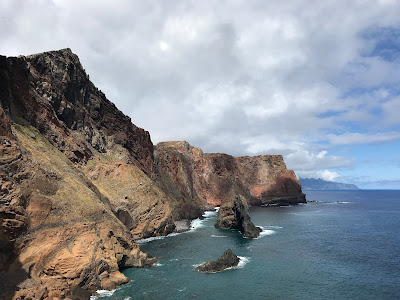 Sunday 24th June
On our last morning we decided to get up early for a change and walk the Zino's trail, more so for the spectacular views that were on offer. A good hour was spent on the trail and the views were indeed amazing and many photographs were taken, and at times there were sheer drops on either side of the trailIt was quite surprising how hard work it was walking up and down the many steps that line the trail.

The hillsides were covered in Broom creating a stunning effect when the sun hit the slopes, and what we presumed was a Zino's nest below us. Incredible how these birds find their way in and out of the valley each night.

Afterwards we walked a trail for our last attempt at photographing the Madeiran Firecrest, and many pairs were encountered allowing very close approach. However, I was much more relieved to come across a couple of Madeiran Speckled Wood, another endemic encountered along with a cool-looking Fungi (Laurobasidium lauri) found on many Laurel Trees. A coffee break after produced a flyover Trocaz Pigeon, a pair of Grey Wagtails and many Chaffinch.

The rest of the day like all the others was spent watching football and generally chilling out. 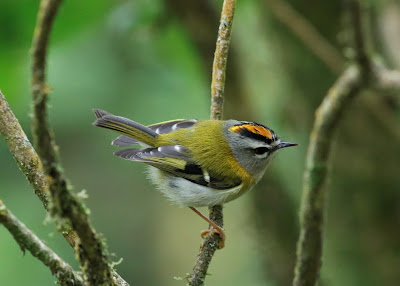 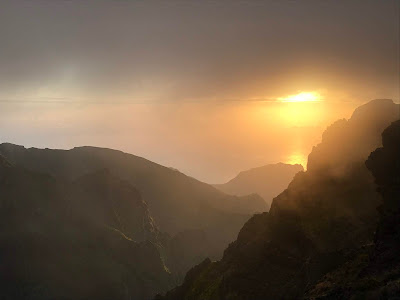 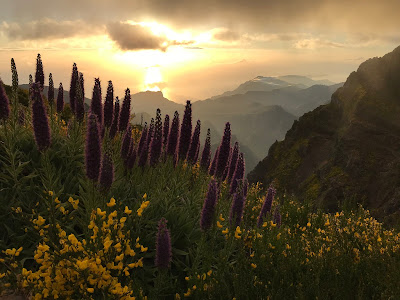 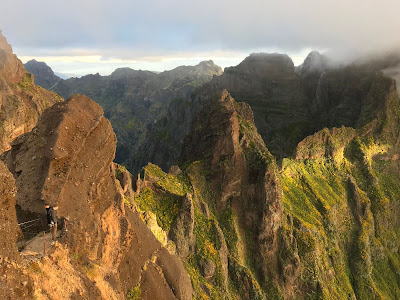 The trip had been very successful and spent in great company and admittedly it was nice to have a chilled out trip for a change, although Madeira is hardly a place that can be birded fully for two days straight as the species list is so limited, but still a lovely island to visit.