A walk on the head from mid morning to midday produced a few migrants but still nothing like it should be this time of year. However, a minimum of five Firecrests were scattered about, mainly on the golf course while there were singles of Wheatear and Chiffhcaff also about. 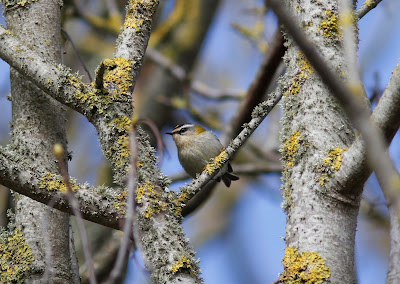 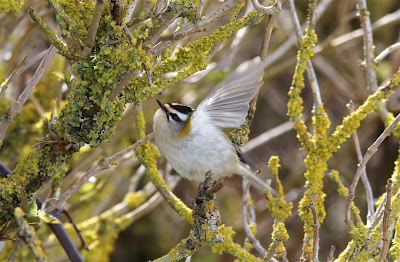 Despite the promising wind directions, yet again the passage wasn't that great and over four hours the species tally remained low. A surprising good number of Sandwich Terns and Common Scoter were passing, but frustratingly no Skuas despite Birling getting a trio this morning. With so few migrants along the south coast, I had no inspiration to venture further. 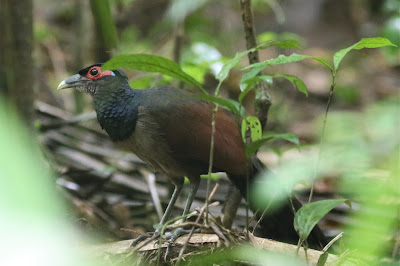 I arrived at Splash Point full of anticipation with the SE wind blowing, however one aspect I had failed to look at the night before was the NW winds dominating further west down the channel. This mixed with some rain in the channel meant from 05.50 - 06.20 I saw very little. I then decided to walk the headland where likewise no new migrants were seen. Intense hunger as well as few birds led me back down to Splash Point to join the others where thankfully over a 3.5 hour period a good range of species were passing, albeit at a slight trickle.

Afterwards Dad took me to his beloved Wall Brown caterpillars at the back of Seaford where we found about 20 individuals.

On Thursday the Cuckmere produced a single Avocet, 2 Black-tailed Godwits, 2 Knot & a Water Rail. On Tuesday a single Firecrest was on Seaford Head, so all in all, a quiet start to the spring.

A very chilly walk down the Cuckmere was better then expected with most of the weekend stuff still present. However the highlight was a drake Tufted Duck on the meanders which is a very good record for here. Around the scrape was a male Wheatear (my first of the year), two Firecrest and five Avocets, whilst six Pintail and a very large flock of Brent Geese were present on the fields, totalling over 500 birds.

Despite covering the whole of the patch today (Seaford Head & Cuckmere), Splash Point was the only site worthy of a mention, and even that wasn't too exciting. The only highlight came in the form of a Common Tern that went east early on. Not normally noteworthy, at the time of watching I was thinking that this was an early record, but it wasn't until doing some research that I realised how early the record actually is. If I'd known I might have even tried to get a blurry photo.

10-year average for Common Tern in Sussex is the 26th March, this also being my personal earliest record.

Two seawatches today but only totalling 1.5 hours between 06.35 - 09.30 (whilst walking the headland in between) with totals of:

A lot of hours spent in the field today with pretty much the same results as yesterday. Late morning on the Headland were 3 Firecrests and the same feeding flock of Redwing near to Harry's Bush.

The Cuckmere in the afternoon was equally quiet with still no increase in Rock Pipits, and those I'm seeing are all of the petrosus type. The Knot is now on the scrape, as was a showy Water Rail, and 10 Pintail were also scattered about. For the second evening running there was nothing along Newhaven West Beach. Very little else to report in what is a month more of hope or expectation, then reality. 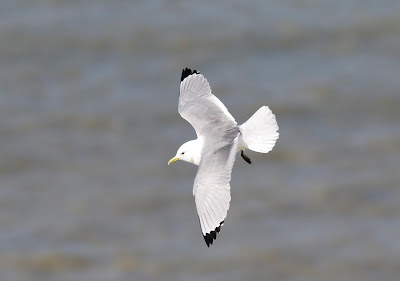 Being on standby this morning meant I couldn't venture too far but around midday I walked the patch in the hope of a few migrants. I started at Splash Point where half hour produced a few birds passing.

On the headland in frequent showers I came across 4 Firecrests and a feeding flock of 27 Redwing. With heavy rain continuing I decided to leave the Cuckmere for another day. This morning a Firecrest was also in the garden. 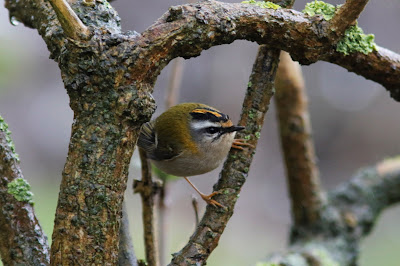 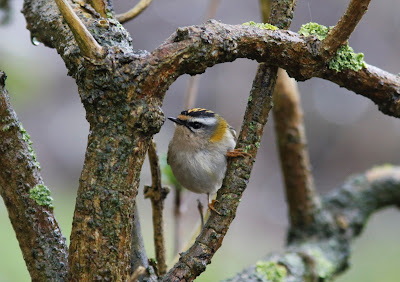 Last night I was all ready to take on a Snowy Owl twitch to Norfolk, until news came through that the bird had inevitably flown high and south. This meant I started the day down Splash Point where I enjoyed a four hour seawatch. Good numbers of Brent Geese and some good mixed species flocks of Duck were very welcoming. Highlights came in the form of three superb summer-plumaged Shags offshore that had their crests fully raised, and just before I left a drake Eider and a Velvet Scoter flew past. Two Harbour Porpoise were regularly seen offshore throughout the morning also.

Having resided the fact that the Owl wasn't going to show I was all for the Mother's Day duties, but then the dreaded pager came into full swing with a sighting of the Owl, this time at Snettisham RSPB. I quickly rang Gareth and with gritted teeth arranged to meet and head straight up to Norfolk. Eventually after an extremely tense drive we made it, with still another twenty minutes of long strides towards the southern end of the reserve to go, where luck was finally on our side as the bird had spent all the time in the grass, but just prior to our arrival, flew up onto a fencepost and posed admirably for the remainder of the day. The Snowy Owl was just stunning and performed better then I could've ever imagined. As the day went on and the light fading, it flew from one fencepost to another, before flying up onto the seawall and then flying off. One of my top birds seen in the UK, and a long overdue world tick. A Barn Owl was also knocking about with another two seen on the walk back. 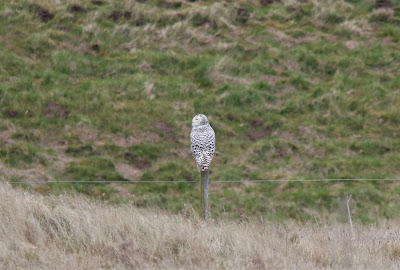 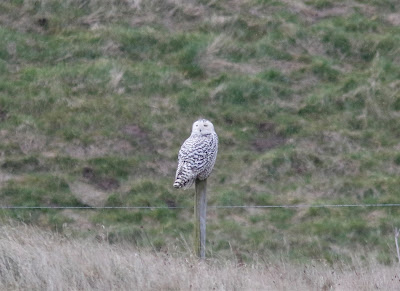 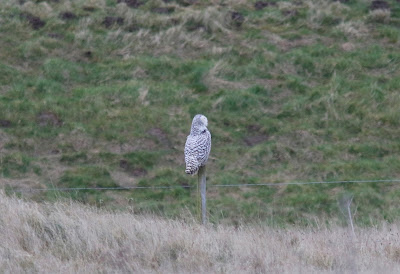 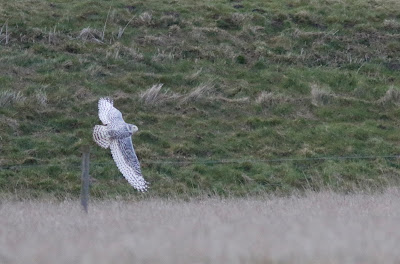 After yesterdays Pintail mega count I was keen to get in with the some of the action today. Not the 20 I was hoping for but still 13 were present on the meanders. This still being an excellent count for the site. Two Shoveler were still on the scrape as were two Bar-tailed Godwits, and a Knot was along the AGP pool. Still barely the totals recorded yesterday by Liam and Peter but very pleased with this early March visit.

Yesterday a male Blackcap was in the garden.