With similar weather from the exceptional period of late-May 2008, optimism ran high for a visit to Beachy Head this morning. I had planned to meet Ian and Jake at the hotel, and from there we walked the rides down into Whitbread Hollow, Cow Gap and the gulley, Francis Bottom, Icky Ridge, Hotel Garden and all sites down to Belle Tout area, and then a long slog back up to the hotel.

The time of year of course means very few migrants are present, however, there is the outside chance of a potential rare bird. None of this today, although whilst in Cow Gap gulley, a female Serin was heard and then quickly found as it patrolled the area, showing relatively well as it perched on top of the scrub. Half an hour later, walking up through Icky Ridge, another Serin was heard and then seen well in flight, that in good light, was assumed to be the same bird as the Cow Gap individual... it also seemed to be flying back that way. Then, a few minutes later, Jamie Partridge informed us he had had two Serins, and a short time later one of these two then flew past us as we were watching over the hotel garden. So, we had definitely seen two Serins, and may have seen three. With a singing male at Dungeness too, it seems the conditions are working, and hopefully will continue to deliver over the coming days.

Elsewhere, a singing Reed Warbler at Belle Tout Wood was sadly just a Reed Warbler. Of note, a very fresh Dark Green Fritillary and a few Bee Orchids (both colour forms) were found on what was an enjoyable walk. 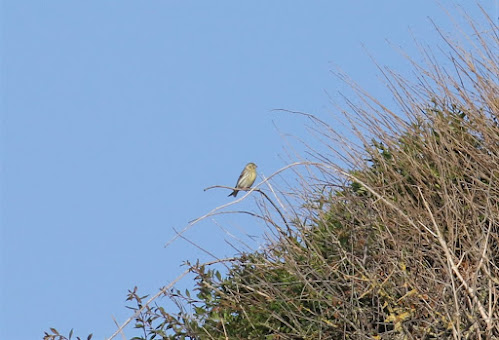 Saturday was a domestic affair, so fast-forward to Sunday and in the early hours I met Ian at a sight in West Sussex for some orchid searching. Our main target, the Sword-leaved Helleborine, had us searching for some time, but eventually we found the only colony in Sussex.

On the way to the site, near to South Hardham, I spotted a huge White Helleborine on the side of the road. As I had time, I pulled over and searched the brilliant beech understorey and found several Bird's-nest Orchids, including one that was the biggest I'd ever seen. At another location away from here, I again stopped as the habitat looked ideal for my orchids. A quick scout around didn't actually produce any, though as soon as I parked up I could hear a Goshawk calling. After a while, two birds flew through the forest showing briefly. 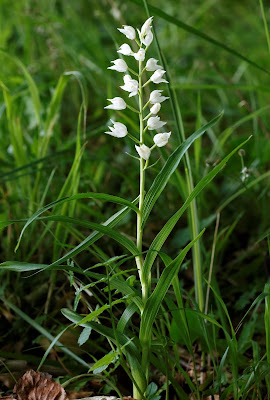 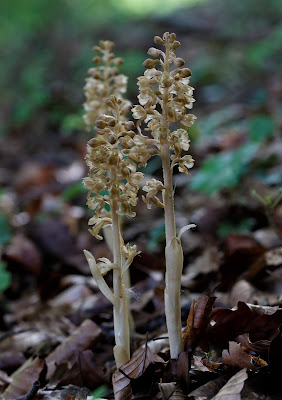 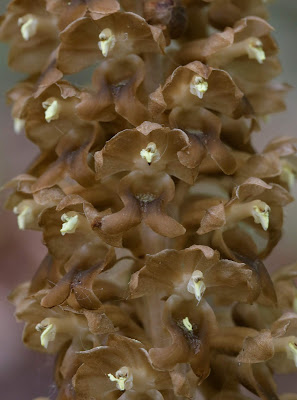 On Monday, I had an excellent day touring a few sights in West Sussex. Although I had many targets for the day, I wasn't anticipating on seeing them quite so easily (this can't be said for the Wood Warbler, where I didn't have a sniff of one all day).

I started the day at Stanley Common, a site I'd never been to before, but also, a sight that back in the day used to hold an annual pair of Wood Warblers. With few birders checking out these sites, I thought it was worth a go. A circuit didn't produce any Wood Warblers, though I found some decent stuff that is listed below:

Next up was Blackdown, a site this time I had only visited once before when the Parrot Crossbill was there. Despite walking several good looking slopes, I still couldn't locate any Wood Warblers, but as always the typical heathland birds were encountered, plus of course the stunning views of the surrounding counties. A Dartford Warbler took a particular liking to me during my visit.

At Woolbeding Common I laid on the floor for about an hour hoping to pick out any raptors that might've been patrolling the skies, though typically just the usual Common Buzzards, and two stratospheric Sparrowhawks going over, was all I could find. In the same field as me however, were four Woodlarks that included a mating pair. A Downy Emerald also flew through, but best of all were a swarm of up to perhaps 400 bees that went past in a tight-knit group.

With temperatures now soaring, I checked a site along the River Rother and happily found up to four Common Clubtail dragonflies, including a recently emerged individual. Also present was immatures of both Scarce Chaser and Black-tailed Skimmers, a Hairy Dragonfly and an Emperor, whilst the damselflies consisted of only Azure and Large Red. 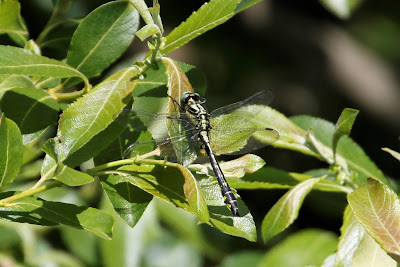 I then spent many hours walking the understorey of the large network of beech woods in Charlton Forest. I was on the hunt for Fly Orchids, though surprisingly I couldn't find any, despite the habitat looking absolutely brilliant. There were plenty of Bird's-nest Orchids scattered about, but little else. On my walk back, walking under more trees on the escarpment heading back down into the village of Heyshott, I found a sleeping Badger. I had to change my camera lens and negotiate a few branches so I could get a clear view, and after a while the Badger woke up allowing me to take several photos as it looked on rather perplexed. A male Goshawk flew over and at the bottom of the escarpment, I finally found a small colony of Fly Orchids, a few Greater Butterfly Orchids, and many White Helleborines. 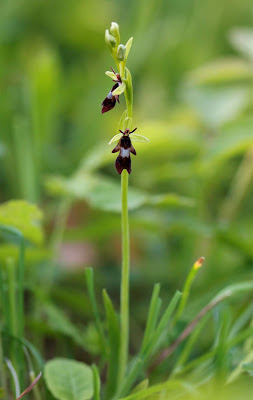 My final destination was Ambursham Common, a site I used to love being taken to by my Dad, and where we've easily had our best Nightjar encounters. A walk around first produced a Hobby and the typical heathland species, and finally, when the sun went down, I saw a minimum of five Nightjars, that included perched views, wing-clapping and of course plenty of 'churring'. No Woodcocks was the only disappointment here, but it had been an exceptional day, a day that also produced a Honey-buzzard during my wanderings.

An early morning vigil into West Sussex was a great way to start the day. I started off at Durford Wood (a site I'd never been to before), that straddles the Hampshire/West Sussex border. I was hoping to find a Wood Warbler, though to not much of a surprise, I failed in this quest. It was a lovely site though, and with the 'Welsh feel factor', I could easily imagine that Wood Warblers once graced the heavily forested slopes on this site. The welcome sign also had a picture of a Pied Flycatcher on it...! All I did find were four singing Firecrests ,and base leaves of a few Broad-leaved Helleborines.

Afterwards, I nipped into Iping Common. Certainly many more birds were present here, including the typical heathland species that one would expect. A Cuckoo was also present. 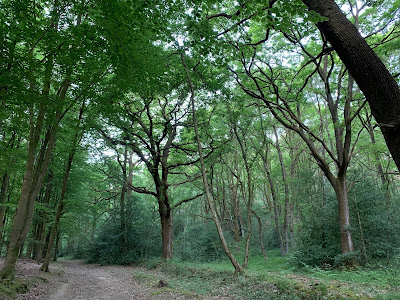 This weekend in previous years I'm normally very busy on the patch, therefore neglecting all other aspects of natural history that I could otherwise be finding around the country. However, now that I'm based in Hampshire, means I'm less than an hours drive away from various counties that all hold a number of annual targets for me, targets that I would never get around to seeing if patch dedication was at the forefront of my mind. So, with governmental advice firmly set in, I made my way around several key areas not too far from Alton.

As Friday evening was lovely and calm, I visited a site in West Sussex and had a lovely time watching and listening to two Turtle Doves, two Cuckoos, Garden Warblers, and a cacophony of birdsong.

Saturday was rather uneventful, but over the course of the weekend produced finally my first Willow Warblers of the year, Nightingales, Redstarts, Tree Pipits, Woodlarks and a Spotted Flycatcher, again in Sussex. Afterwards, a location not too far away in Oxfordshire produced one of my favourite orchids, this being the Monkey Orchid. Lots of the hybrids were also present, and Pasque Flowers were the other botanical highlight here. Butterflies consisted of many Green Hairstreaks, and both Dingy and Grizzled Skippers.

Lastly, a short excursion down into Wiltshire produced a good number of Marsh Fritillaries, as well as several Adonis Blues and Brown Argus. 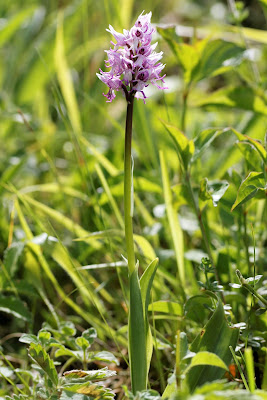 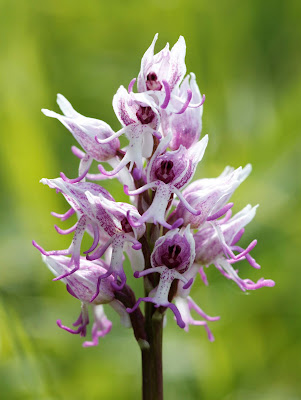 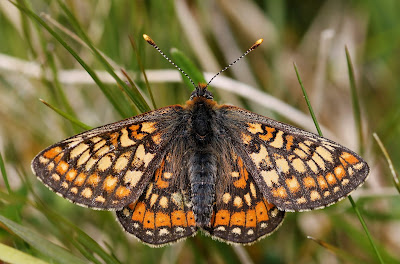 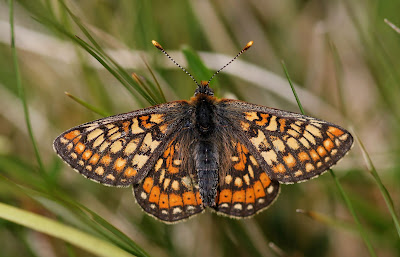 As it's only a twenty minute drive away, I made the most of my evening last night and visited Chappett's Copse in the Meon valley. Despite extensive searching, I couldn't locate any Fly or Birds-nest Orchids, although there were a few White Helleborines, and some base leaves of Broad-leaved Helleborines present. 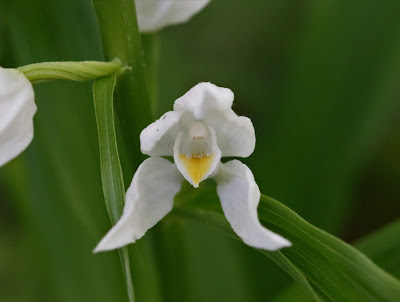 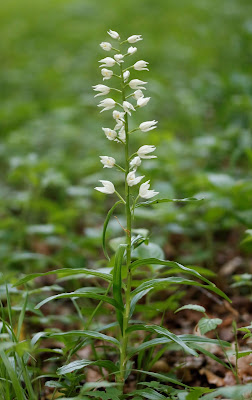 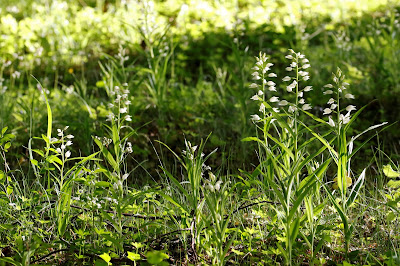 Over the bank holiday weekend, I ventured into the far west of West Sussex in search of one of my favourite orchids, the Bird's-nest Orchid. I could've easily located colonies that I've known from other years, however, there is something very satisfying about finding your own colony. The assumption is others have located this colony before, but it's not clear if this is the case, so with my mind set on finding this plant, I was very pleased to have found them within the superb beech woodlands.

What was probably more unexpected was finding two Pearl-bordered Fritillaries along the woodland rides here, though I'm very much assuming the butterfly mob have released this species here, rather than this being a naturally occurring colony.

During the week, I visited the badger set once again. I'm still yet to see the cubs, despite them being extremely vocal - maybe on the next calm evening they will finally surface. What was noteworthy however, was a close and almost intimate view of a male Goshawk as it swooped low between the set and myself. A singing Cuckoo and displaying Tree Pipit was also great to see/hear.

A long walk on Saturday revealed the presence of many recently-emerged Beautiful Demoiselles, and a couple of Banded Demoiselles were also present along the lovely streams. Very few birds about, and despite hearing a few Willow Warblers now this spring, I'm still yet to see one...….very depressing to have not been able to see any passerine migration this year!

A 23 mile bike ride during the week down to Alresford pond produced a flyover Dunlin and good numbers of all three Hirundines. Four Swifts were screaming above the lake as well. Other than that, birds have been very few and far between up here, so it's been down to the butterflies to keep me entertained.