A long day at work and all day I was planning a quick walk down the Cuckmere before dark. Even more so as I received a text from Andrew when I landed as he had found a Wood Sandpiper on the scrape. This would be only the fourth Wood Sand I'd have seen in the Cuckmere itself (three on the Head flying over in previous years) and so I was keen to get down there quickly  Just prior to my arrival, Jake G. text me stating a Short-eared Owl was over the scrape, so I belted it down to the pub and could see the Owl in the distance.

Anyway, the Wood Sand was still on the scrape but rather flighty, and eventually ended up on the west side, and all in all a good tally of Waders were found, as well as a few other migrants. A cracking evening. 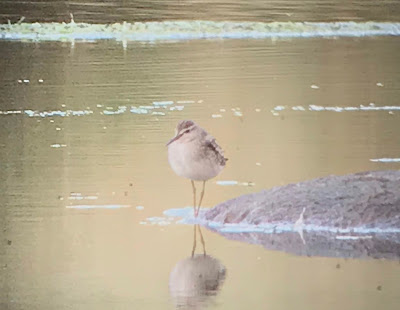 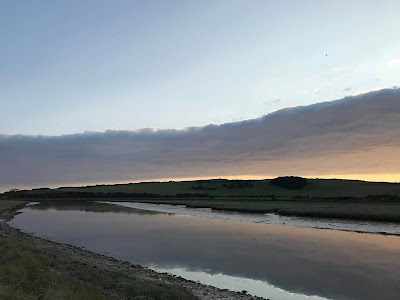 Despite being the first calm morning for a few days, the area was fairly quiet and no doubt in need of a clear night to get things moving again. Eventually a respectable number of migrants were found, however I can't remember having not seen/heard a Tree Pipit during one of the last few days of August before. A good spread of Reed Warblers this morning and an adult Hobby was perched on the electric fenceline running across the sheep field at first light, but that was about it.

Mid afternoon I returned for a short raptor watch, but this only produced nine Swifts circling together above Harry's Bush.

Late afternoon and into the evening I walked roughly 5-6 miles over the downs behind Bishopstone and Seaford hoping to come across a Montagu's Harrier, and on the first attempt no luck but I'll be back up there a few more times during the next few weeks. Just a Redstart, Spotted Flycatcher and a few Wheatears for the aching legs. 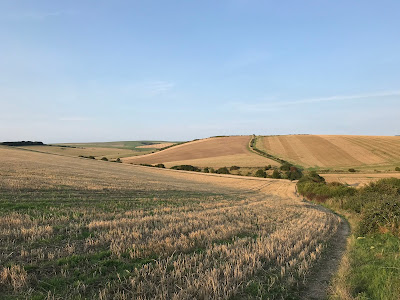 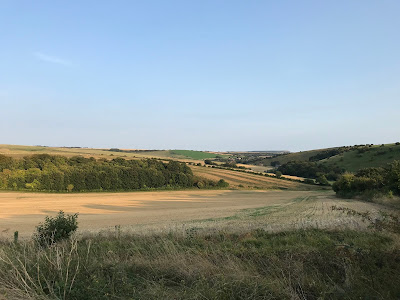 Very quiet this morning which wasn't a great surprise due to the incoming frontal system. A flock of 40 Commic Terns flew high and south at 06.20, and thankfully the Wryneck (typically elusive) found yesterday was still present at Hope Gap, though most of the migrants reported yesterday had departed overnight.  In Hope Bottom the Blackcap flock is starting to increase, with at least 30 birds present currently.

A seawatch off Peacehaven late morning before the rain came produced very little. 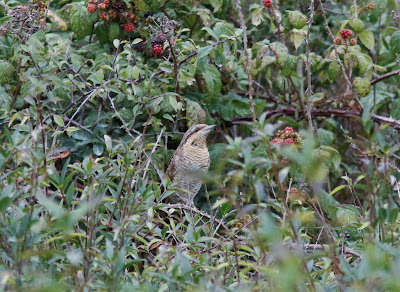 Despite getting in from work at 3am this morning I was keen to hit the patch again, and so I was back up at 5am. Breezier then I'd imagined this morning but in the end this mattered little as there was an abundance of migrants this morning, especially Sylvia Warblers which were very plentiful, and especially Lesser Whitethroats in Hope Bottom where almost every other bird was one. Once again a small number of north-bound Willow Warblers left the head as the sun hit the area. Most noteworthy today was a large flock of Wheatears (21) along the fenceline by Harry's Bush, ten of which soon after flew over together heading east calling as they went, and a lovely Pied Flycatcher in the wood. An Adder later on was great to see, at a time when the wind had strengthened considerably, therefore I went back to bed. 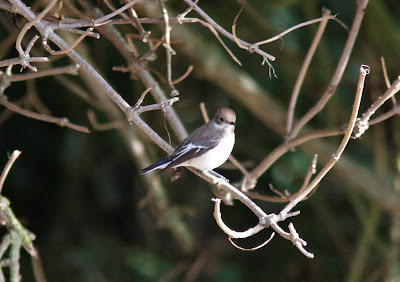 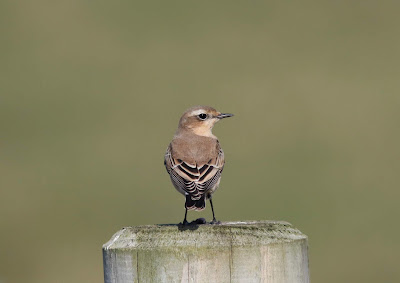 At 2.15am I was wide awake and somehow heard a Dunlin fly over. Thinking this could be a sign of a bit of migration I decided on Seaford Head this morning before work. Unfortunately quieter then hoped but still a fair selection of migrants, whilst overhead a few flock of Swallows and a couple of Tree Pipits were moving. The highlight were at long last my first Redstarts of the autumn, with three seen this morning.

I decided against the headland this morning due to the wind. However the Cuckmere was presumably equally quiet with the following recorded:

The first calm and clear morning for a while coincided with my first day off from work. Upon arrival there was a steady trickle of Willow Warblers moving inland, which were soon joined by a Spotted Flycatcher and many Whitethroats with the same idea. Plenty of Sylvia Warblers this morning all over the place made for an enjoyable morning, with the only added interest being a showy Nightingale and a brief Grasshopper Warbler, the latter bringing up another '9 species of Warbler' day. I stayed on until late morning hoping for a raptor but with no joy.

On Monday I twitched the Hooded Crow at Medmerry RSPB, this being my third county tick this year. A horrendous photo can be found below. 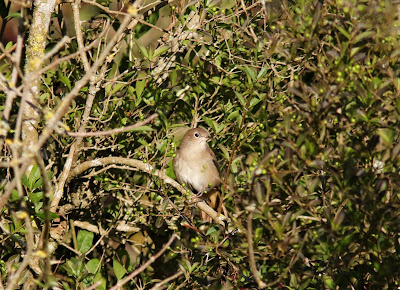 All during the week I had been eyeing up Saturday as a potential day to head down to the headlands of Cornwall for some seawatching as a large low pressure system was set to hit during the day. However, as the week went on the low was dissipating and the wind becoming less, although enough for me to still be interested. On Friday I was all set to go but by the evening I couldn't really be bothered having gone through a series of weather charts and starting to lose interest and talking myself out of it. In fact, I was getting ready for bed when Paula basically kicked me out of the flat as she knew I'd be grumpy if I didn't go. This was the kick up the backside I needed, and at 23.05 I left home, bound for Porthgwarra.

The journey was a good one with a couple of shooting stars knocking about, and a couple of Badgers showed very well as I made my way down the narrow lanes to the car park at Porthgwarra. I arrived at 04.10 and had a kip until it was just becoming light.

What I really wanted from today was a decent passage of large Shearwaters, but within the first couple of hours it was apparent this wasn't going to happen, although there is always the hope that the grim conditions that swept over the headland would produce a passage of something when conditions improved. By late morning the weather had cleared and now there were ca. 25 observers occupying the clifftop, including Garry Taylor, Michael McKee, Mathew Meehan, Cliff Smith & Alan Lewis.

The sea had become quiet with just a good number of Balearics and a close Great Shearwater drifting past, when at roughly 11.46, Alan Lewis picked up a Pterodroma. Turning round to judge where he was looking gave me some hope as it was a long way around to the left. All morning I had been slow on picking up even the large Shearwaters (tiredness and dodgy scope being my excuses), and to say I was tense was an understatement. One by one others observers exclaimed they had it and accurate and calm directions were being shouted out. My heart was thumping so much I could barely concentrate and the reality of setting eyes on this much wanted seabird was fading ever so slightly. The helpful indication of flying alongside a Manx was shouted, and from this I thankfully picked up the Pterodroma (which was quickly identified as a Fea's-type Petrel by Alan) just left of 12 o'clock and I could breath a sigh of relief and watch this very rare Petrel do its stuff. The superb black underwing contrasting with the very white underparts and the ashy grey upperparts meant this could only be a Fea's-type Petrel. The flight was a classic Pterodroma flight watched for maybe one minute. At 11.50 it passed the Runnel Stone where a number of us fired off a series of shots with poor results shown below.

Afterwards scenes of jubilation dominated the headland and it took roughly half an hour for the adrenaline to get back to normal levels as everyone was wondering around showing off their videos and pictures and describing the events that had unbelievably just happened.

The only downer from the event is not being able to tick this sought-after seabird. The Fea's complex has been split into Fea's Petrel (breeding around Cape Verdes) and Desertas Petrel (breeding on Desertas, Madeira) and identifying them even from the hand is extremely difficult, and therefore from a boat or a headland, its impossible to determine which it is, so therefore for now it goes down as a Fea's-type Petrel. But still, its not all about the tick!

The rest of the seawatch was relatively slow and underwhelming and with work the next morning I was keen to make tracks early, and therefore left the headland at 16.45. The journey back was again good with fewer caravans then I expected, and I arrived home at 22.30.

A brilliant seawatch and some reward after the many visits to Cornwall either hoping for a Pterodroma or a big Shearwater day. The latter I'm still waiting for.......

Three visits this week have produced very little in the way of migrant Waders and anything alike. Nothing on the 7th Aug but the 8th Aug produced the following:

and the 9th Aug produced the following:

On the 9th Aug a 21 mile run up the Ouse Valley and elsewhere produced a Whimbrel and five Common Sandpipers along the river.

Below are photos of some juv. Yellow-legged Gulls from Newhaven Harbour taken last month. 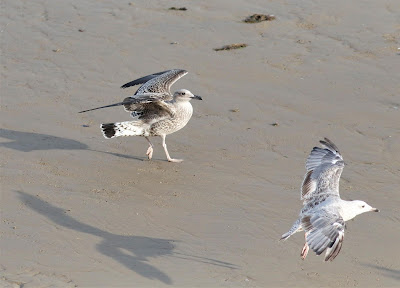 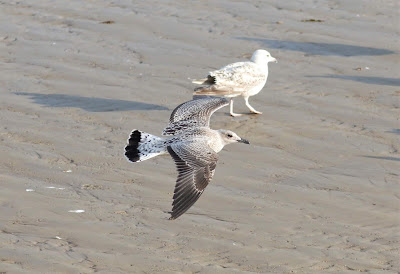 I was keen to get in with some of the Pied Flycatcher action with having to work this morning and hearing about numerous sightings on the patch and further afield. I headed straight for Harry's Bush and two were found on the SW corner that was sunlit and sheltered. Ten minutes later along the belt of Sycamores and Elders were a group of four that all too soon spread out in different directions. I suspected there may have been five in the group but I couldn't be sure so I stuck with a safe total of six Pied Flycatchers. I checked Florence House area but no more were seen. Just wish I'd had the day to do a thorough check of the area. 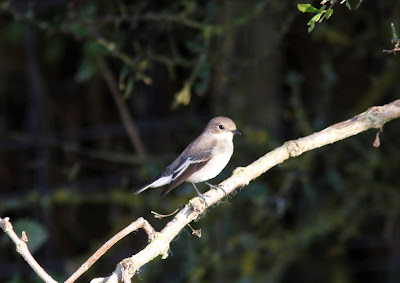 A clear out pretty much from yesterday, although surprisingly the Pied Flycatcher had remained overnight. What were new in were three very vocal Nightingales, but 'best' was saved until last as a juv/fem Marsh Harrier flew in from the north, circled to a good height and then headed back west. This probably being my earliest sighting in the autumn.

Certainly quality over quantity this morning. The standard route was fairly quiet although there were good numbers of Acros dotted around, and the first Wheatear of the autumn was also a nice addition to the mornings species tally. Despite very few Phylloscs about today, it was a nice surprise to find a superb Wood Warbler in Harry's Bush, which was then soon joined by a Pied Flycatcher, an event that I can only remember happening from Dinas RSPB in the Brecon Beacons many years ago. I should've joined Jamie Wilkinson down Hope Gap afterwards as he saw a Grasshopper Warbler there, which would've put me on a ten Warbler day. 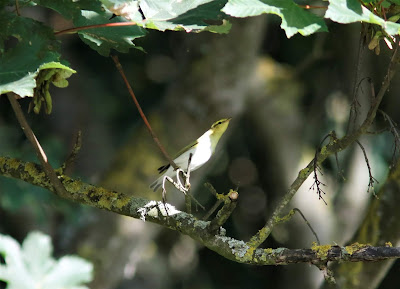