It's been a rather rubbish year in general, with little time for local (Sussex) birding, very few foreign trips, hardly any twitching, and the biggest of all, the death of my dear Mum.

Thankfully, the year was saved in the latter few months with two trips to Spain (both leading for Naturetrek), some decent finds both in the UK and in Fuerteventura and a short twitch from County Durham for the amazing Belted Kingfisher in Lancashire! Also, seeing over 5000 Razorbills in an hour past Splash Point a week before Christmas was also rather epic.

My best finds for this year were in short supply, but did comprise the following:

Other excellent highlights from the year in Sussex were the White-throated Sparrow at Barcombe, a few Pomarine Skuas and an incredible passage of Common/Arctic Terns past Splash Point, the insane re-find of the Northern Mockingbird at Pulborough and thorough investigation to find the whereabouts of the Monkey Orchid near Arundel!
Away from Sussex, Shetland provided much enjoyment, with a spring visit producing the goods with a Snowy Owl, an adult Long-tailed Skua, two Rose-coloured Starlings and the amazing Storm-petrel experience on Mousa. Finding my last UK dragonfly species (the Azure Hawker) with Dad in Highland was epic, as was the encounter of a Golden Eagle we had in the Findhorn Valley. A number of butterflies and other orchids were also seen.
One of the most adrenaline-fueled moments was being within touching distance of a Red Helleborine in the Chilterns... absolutely epic stuff.
Anyway, the following pictures make-up my stand-out moments of 2021:

A long while since my last visit, and today I only had a short time before having to head back for work, but this was still plenty of time to find three Caspian Gulls in the gull flock. There were also quite a few each of Yellow-legged Gull and argentatus Herring Gull too, but I didn't have time to hang around and count.

It's been a relatively hectic few months with guiding for Naturetrek, and now with my feet firmly on the ground for a few weeks, this has enabled me a fraction more time to go birding. Of course, I remain loyal to Sussex and so I had planned a short circuit for this morning around the north-west of the county.

I started at Stanley Common but this was exceptionally quiet with just a handful of Brambling being the only noteworthy species. A short drive away near to Milland, a short walk produced a decent view of a male Goshawk and five male Crossbills.

I was going to give up on the day, but with Iping Common just over the hill it seemed silly not to give it a quick visit, especially as I had Great Grey Shrike on the brain. Sadly none of these, but entering the common, I soon mulled over how similar the habitat appeared to that at Thursley Common, and quickly, the thought of finding a rare bunting entered my mind. Literally seconds later, whilst looking at a Reed Bunting atop a Birch Tree, a smaller bunting popped up next to it showing off bright, chestnut-coloured cheeks (Orange-cheeked Waxbill like ;-)). Being at a distance and without a scope or camera, it wasn't easy viewing but the obvious dark flecking on the breast was enough for me. Thankfully though, and to clinch the identification without seeing the black border to the ear coverts, the Little Bunting flew and started calling... BOOM!

After a couple of circles overhead, the bunting flew off but I knew it'd be back, so I went and grabbed the scope (I left the camera with three flat batteries!) and returned to the same spot. After wandering and checking every bunting, the Little came back into view and showed well for ten minutes allowing some more video and photos to be taken. I then called it a day and returned home, but delighted with finding a scarcity so far away from the coast, with the added highlights today of a Goshawk, Crossbills, Brambings and Dartford Warblers.

Little Buntings in Sussex have been somewhat frequent in recent years, with three this year and two last year, but this is still a pleasing 'find tick' and very unexpected. 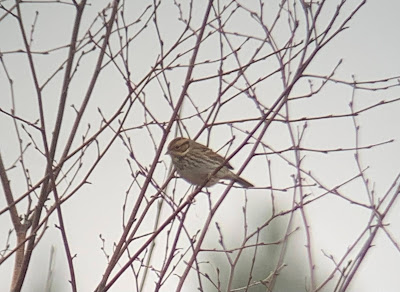