Yet another day with grim weather and so I had no choice but to wrap up and go and look at the very large Gull flock in the Lower Cuckmere. Today there were two large flocks and so working between the two was hard work.

However, a total of three Caspian Gulls were found, with the most interesting being the same first-winter I had found on the 9th November and had not seen since until today. Also of interest was a presumed Polish-ringed third-winter (red ring with white lettering) and a stunning near-adult bird. Yellow-legged Gulls were also well represented with at least nine birds present, including six adults, a third-winter and two second-winters. An adult Mediterranean Gull was also in the area. 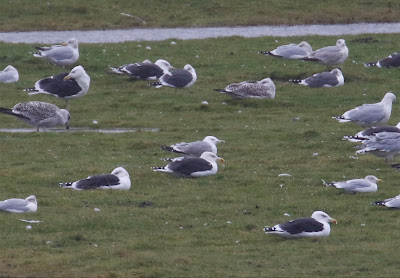 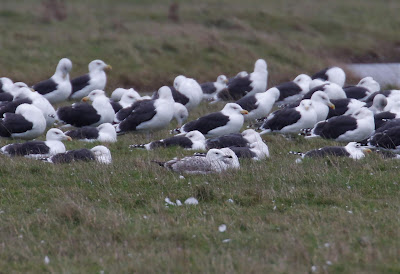 After dipping on the Splash Point Snow Bunting I found myself back in the Cuckmere where there was encouragingly a large Gull flock present. The initial few scans produced only a few adult Yellow-legged Gulls. Eventually an adult Caspian Gull and a 1w Mediterranean Gull was found but it was a slightly disappointing outcome.

Whilst watching the flock I heard the approach of what I presumed were White-fronted Geese, and four of these lovely birds dropped into the Cuckmere and remained the entire time I was down there.
As time went on more Gulls joined the flock, and with Richard’s arrival came more Caspian Gulls, with a total of five present, including the same adult seen initially, with totals of two adults, a third-winter and two first-winters. A few small flocks of Redwings and a single Fieldfare flew over whilst scanning the flock, which made for an enjoyable time watching the Gulls.

I stopped off at Splash Point on my return as the Bunting was reportedly still present, however I couldn’t find it. 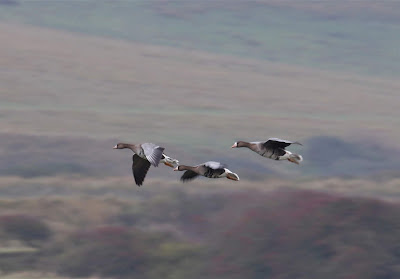 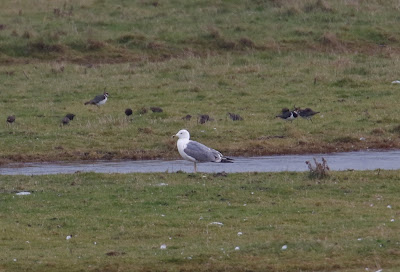 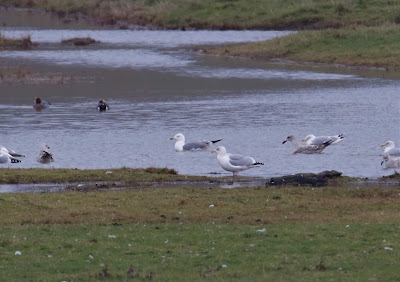 A brief spell down at Splash Point produced two Black-necked Grebes close in that hung around for maybe twenty minutes this morning.

A look at the Gull flock in the Cuckmere produced only an adult Yellow-legged Gull, this despite there being a large number of Gulls present. 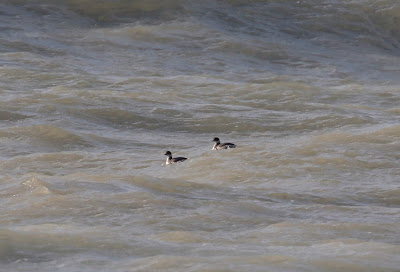 Last week was the week for Sussex to get it's first Pallid Swift, and it probably had four, although neither were photographed and therefore the county's best chance has now come and gone. I did twitch the central Brighton individual but despite the low cloud the bird had not hung around long enough for anyone to see it.

Last Monday there were two Caspian Gulls in the Cuckmere, both the same birds that were seen last Saturday. However, since Monday Gull numbers have been low and no more were seen all week.

Despite being out a lot last week the only highlight were my first returning Purple Sandpipers on Newhaven East Pier, with two birds present. A Brambling flew over Newhaven Fort and there were plenty of Goldcrests still scattered about. I had searched Splash Point a couple of times for the Purple Sandpiper seen there by Bob Izzard, however there was no sign.

Only one colour-ringed Great Black-backed Gull was found last week in Newhaven Harbour, this bird being the same I found four days earlier last year, this time being in third-winter plumage and was ringed in northern France.

When the rain settled down I spent the rest of the morning in the Cuckmere finding only a Firecrest and many Goldcrests on the east side. The Eider was also still along the river, as was the Grey Plover.

By mid-morning there was already a substantial Gull flock and so I spent the next hour going through them finding four Caspian Gulls and no less then eight Yellow-legged Gulls. I met up with Richard who had seen another adult Caspian. A first-winter Caspian was different to that of yesterdays bird, unsure about the second-winter being different, and the third-winter and two adults were new birds, so within the last two days there has been a minimum of eight Caspian Gulls. 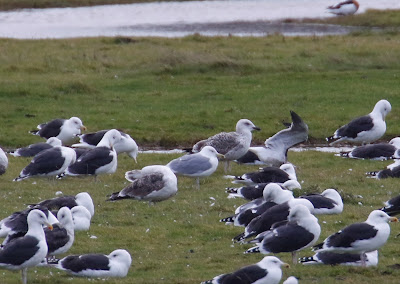 Again after the school run I went up Seaford Head. Walking towards Harry's Bush a superb calling male Crossbill flew low down across my path into Hope Bottom, and a Mistle Thrush was also flushed.

The wood was quiet, but thankfully there was a large Gull flock in the Lower Cuckmere that had a total of four Caspian Gulls and three Yellow-legged Gulls of various ages. The first-winter Caspian Gull had a yellow ring, assuming of a Polish origin, and it was huge!! 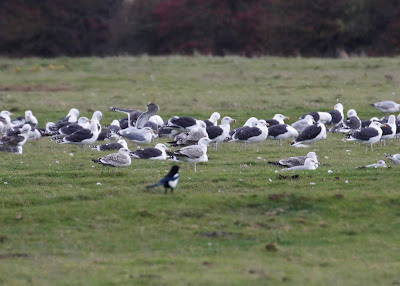 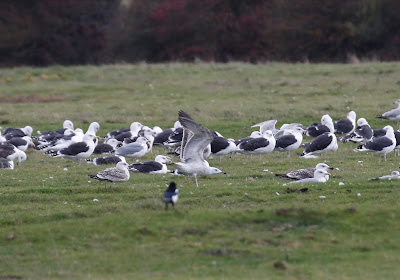 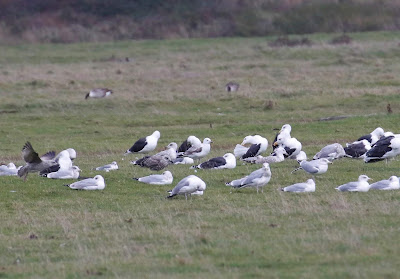 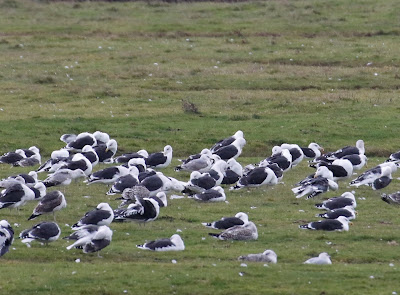 An enjoyable day in what can only be described as perfect conditions for finding a Siberian-stripy Warbler, but unfortunately for me it fell into the safe hands of LP over at Beachy. I resisted twitching the Pallas's Warbler as I was keen to find my own and whatever else might be lurking out there, however despite six hours of wandering around nothing good came my way.

After various step-dad duties and the school run, the day started well with two Firecrests (scarce this autumn) at Newhaven Football Ground, and Firecrests were the theme of the day, with ten encountered over various sites, with seven on Seaford Head, and another in the Cuckmere. Probably the highlight was a House Martin flushed from a sycamore at Foxhole Farm, and a smart second-winter Yellow-legged Gull in Newhaven Harbour. Hopefully these south-easterlies deliver something my way before the autumn is well and truly up. 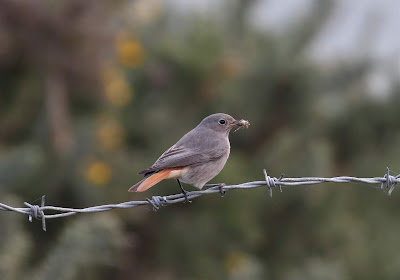 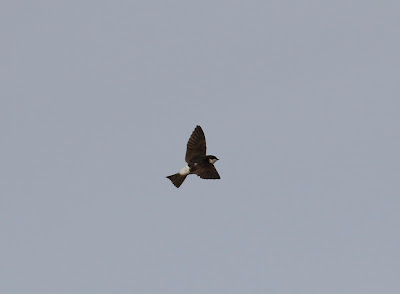 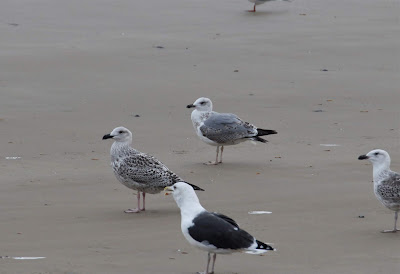 After yet another fruitless morning on the patch, it was with much relief that Chris Ball had found the bird of the autumn (so far) in the form of an Isabelline Shrike. A much wanted bird in Sussex after the suppressed bird from last year, and then the one way back in time (1975) before I was even being thought of!! Thankfully I was at home when Chris phoned me and was on site fairly quickly being in 4th position.

Unfortunately the bird went to roost very early on and so no more then twenty people connected, so fingers crossed its present in the morning. It had earlier been seen fairly frequently perching on top of the bushes, but never allowed close approach as it stuck to the heart of the dense scrub.

The Isabelline Shrike complex is a confusing one, with recent IOC splits indicating a minimum of two species, these being Turkestan Shrike (L.phoenicuroides) and Daurian Shrike (L.isabellinus), whilst Chinese Shrike (L.arenarius) and a sub-species of this are also being considered by Dutch Birding. Plumage wise, the Birling Gap bird is thought to be a Daurian Shrike based only on the plumage features noted, however there are considerable overlaps between all the species and they do hybridise. Hopefully they all get lumped!!

LP got some cracking images which can be seen on his 'beachybirder' blog found on the right side of this page. 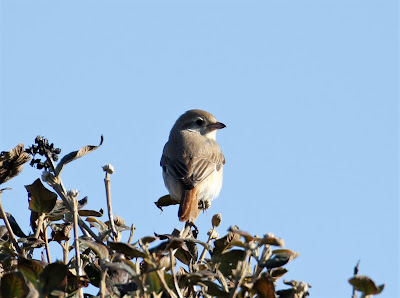