Finally caught up with the Temminck's Stint along the river this morning. Surprisingly my first here despite the Cuckmere being one of the top sites for this species in Sussex, especially a couple of decades ago when small groups were often seen in the spring.

Other birds of note this morning:

After work and a short nap I went down the Cuckmere where during the persistent rain I came across a nice number of common Waders along the river. By the time I had got to the scrape my shorts and shoes were slowly becoming saturated but I kept on having rare birds going through my imagination, and it was at this point I looked at my phone to the brilliant news that a Broad-billed Sandpiper had been found at Rye Harbour. It was at that point I felt what a typical situation this was being at the farthest point from the car when a good bird turns up (the most memorable being the Brunnich's Guillemot at Portland), and this time with light starting to fade adding to the tough decision making.

However, it wasn't long before I was jogging back to the car and I left the Cuckmere at 6.30pm. I was now in full throttle with just the rush hour traffic to contend with, and thankfully made it to Rye in just over an hour arriving at 7.45pm.

I abandoned the car at the entrance to the caravan park blocking the welcome sign and briskly walked to a full Kent crew of birders watching the Sandpiper. Over the next hour the bird showed most of the time, and with Ian joining the crowd doubling the Sussex turnout, it became more mobile though returning to the same spot and was seen feeding to near enough dusk. It was surprising the Sandpiper wasn't present the next day due to the weather, but this made the decision to go very rewarding.

This Broad-billed Sandpiper was only the third in Sussex since 1950, and the last record was when I was just three years old, way back in 1993.

Other news: local breeders in the Cuckmere are off and running with a pair of Shelducks currently raising nine young, two pairs of Stonechats raising three young each, and also a small family of Canada Geese.

Another visit this afternoon failed to produce a Temminck's Stint that was found by Ron Knight at midday. 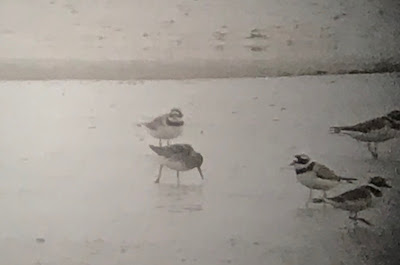 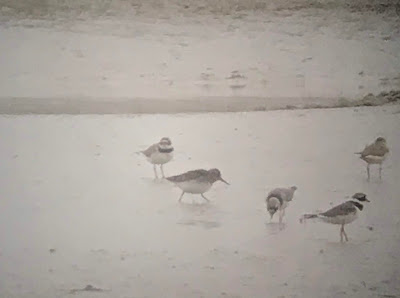 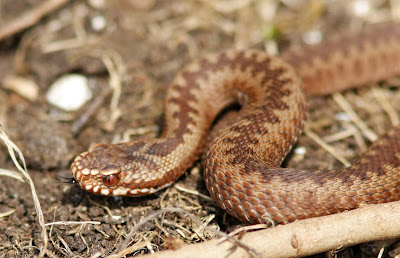 After finishing my standby this morning and early afternoon I ventured over to Abbot's Wood to photograph the Pearl Bordered Fritillaries. On the way over news came through of a Pom past Selsey, though having seen a few this spring I didn't think it was worth it for just one. Having seen the butterflies and a bonus flyover Cuckoo, I couldn't resist but to head to Splash as yet another Pom had passed Selsey.

Upon arrival I was surprised as to how good the wind was, and my first scan produced two Pomarine Skuas battling through the strong easterly wind. Over the course of two hours a total of 7 Poms came through in three groups, plus two spectacular flocks (17 & 16) of Manx Shearwaters. Also on the breakwater were a group of seven summer-plumaged Sanderling, two Dunlin and a stunning summer-plumaged Turnstone throughout my duration.

Very little else moving and so I wanted to end the day down the Cuckmere. Only species of note were three summer-plumaged Grey Plovers.

Very quiet today due to the strong northerly wind blowing. The only thing of note on the Head were a trio of Spotted Flycatchers in Harry's Bush. There was also a movement of inbound Swallows and Swifts.

Next I opted for somewhere sheltered and could only think of Castle Hill LNR. Despite being sheltered, a thorough search only produced a Painted Lady.

Started the day down the Cuckmere where there was little beyond a Common Sandpiper & 3 Whimbrel, and a distant Red Kite. I thought despite the clear conditions the strong northerly wind may have dropped a Wader or two, but it wasn't to be.

This afternoon a spell in the garden produced a superb loose flock of 8 Red Kites heading slowly NE, a displaying Kestrel and 2 Peregrines. 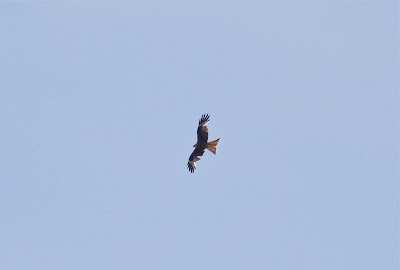 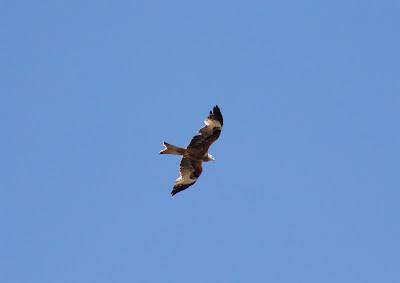 Not much enthusiasm for birding at the moment, but with Shetland's trio of megas this evening I'm sure it won't take long for me to get back on track. Also well done to Dave Cooper on his mega Marmora's Warbler find, a species I've often imagined finding along the Sussex coastline.

This afternoon I went to Caburn with Dad where Burnt Orchids put on a good display, as did a showy Hairy Dragonfly, this surprisingly being the first time I've photographed this species. A Hobby was also hunting above the valley for a short period. 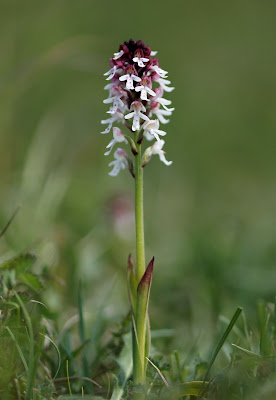 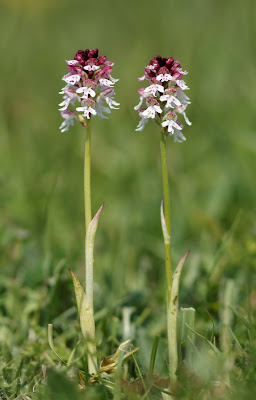 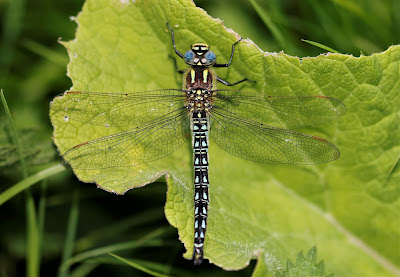 I finished work earlier today and therefore managed to get down to Splash by midday joining Richard and Frank. We left together at 2.30pm having seen a nice Pomarine Skua and a few other bits. After my step dad duties of the school run I quickly got back down seawatching again where Gary and myself enjoyed a very productive four hour seawatch. After my second scan a superb group of 4 Poms flew quite close in heading slowly east and were by far the best 'flock' I've seen this season. With regards to Poms there was one more distant bird and then the group of four that had been tracked all the way from Hampshire, Selsey, Goring & Shoreham, and I had almost given up on them when thankfully they came in and landed straight out from us. There was also a surprisingly good number of Manx Shearwaters despite very few in the past week. With NW winds dominating from now it feels as if the Pom season is very much over (no doubt a couple more will trickle through) and therefore it was good to end on a high, and having seen 69 Poms.

My last day off before going back to work,  and so I continued the trend of the last few days. A very poor seawatch enlivened every now and then by the odd Pom. Thankfully it was Dad's 60th birthday today that gave me no choice but to leave late morning and perhaps saying farewell to another Pom season. Once again it was the Poms that provided the main highlight today, especially the group of five birds that emerged from the murk.

Anothet quiet start that prolonged into the early afternoon, before it all went a bit 'pommy' in the afternoon. By mid-afternoon we were forced up onto the cliff unless we wanted to get high on weed or be at risk of turning into a gangster due to some youths, although they were interested in what we were up to and considerate to where they were standing. Retreating to the cliffs just before the SE wind picked up a tiny notch was wise as from then on a steady trickle of Pomarine Skuas commenced (most high up), and for Josh and myself who had been in situ for 15+ hours by the end of the day, this was very rewarding. The highlight by far were a flock of 12 Poms that sat on the sea for some time, and also a very close single and group of three Poms towards the end. At long last some Pom passage and great to share it with once again great company.

Similar weather to yesterday and with no news filtering through from the west of any Poms, it was looking to be another day without this stunning seabird. However, when it was all quiet just after 10am, a superb flock of 7 Pomarine Skuas sailed past. These weren't the last though, after an hour out at sea on the kayak I set up again on the lowest cliff edge and my first scan produced a flock of 4 Poms, and shortly later alongside Chris Ball, another pair came past.......better late then never.

It wasn't just the Poms, good numbers of Terns & Waders but the next highlight was a minor cliff falls east of the Kittiwake colony that caused a large dust cloud for a short period.

What has traditionally been known for the past few years as a Pom day unfortunately revealed zero of that species during a lengthy seawatch today. The good company and the sense of being gripped off was enough to keep me in position for just under nine hours. Maybe all the Poms are saving themselves for tomorrow's SOS seawatch at Splash Point. The day was saved by a late steady passage of 'Commic' Terns whilst most close enough to be confidently identified were 90% Arctic Tern. It felt perfect for Poms in the afternoon but alas it wasn't to be.

This evening on Seaford beach I did another seawatch with a BBQ by my side seeing the following between 17.45-19.45: 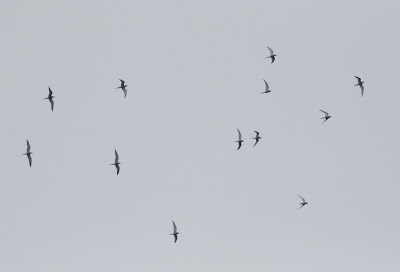 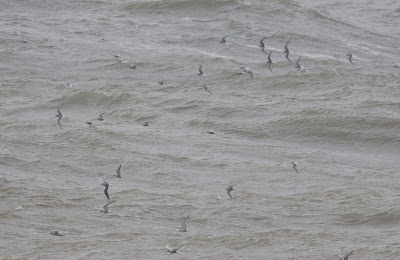 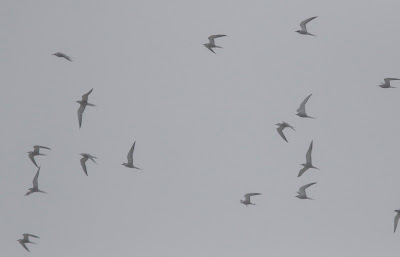 Finally a lovely day and the first bird of the day was a Yellow Wagtail flying over the flat in Peacehaven at 5.30am. I started off down Splash Point, but only for ten minutes as not a single bird was seen, although I wish I'd stayed a tad longer to see the Poms that JFC had at Birling. Seaford Head was equally quiet so it was very surprising for the Cuckmere to be pretty good. The highlight for me were 20 Wheatears scattered about in three flocks, consisting of 9, 7 & 4. Waders were also good to see, as was a singing Garden Warbler at Foxhole Farm.

Afterwards I visited Abbot's Wood and quickly found a Nightingale. This afternoon I walked the fields behind Peacehaven Sewage Works and up to the Green-winged Orchid colony that are already starting to turn, but good to see plenty there.