Another visit to Thursley Common in a matter of weeks was a success as the Rustic Bunting showed for a brief period late morning. It could have given better views, but it's a striking bird and the views I had were just about good enough. Probably the most belated UK tick I've had in years. 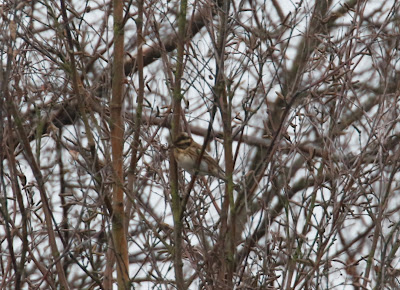 After what has been a terrible autumn for self-twitching, I finally broke, and early on Sunday morning I drove over to East Kent for the Crag Martin that had roosted the previous evening. It was only a two hour journey to Kingsdown and I arrived at 5.30am. It didn't get light for another hour, but soon enough I was standing on the beach with 60 or so other socially-distanced souls in the near-darkness, scanning the supposed roosting perch, to which there was no Crag Martin present!

Once it had got lighter, it was thankfully spotted flying about further down the cliffs and promptly did a couple of fly-bys before landing on the cliffs, this time in view and affording decent scope views. After 15-minutes or so of further flights and landing, it took off south and out of sight, not to be seen again that day.

Afterwards, Ian, Jake and I separately drove north to where the Eastern Yellow Wagtail had been, but after 20 minutes, we got bored and reconvened at Dungeness. All I saw here was a Great White Egret and two Whooper Swans. A check of the pits to the west and into Sussex revealed nothing (the norm nowadays) and so it was to Rye next. The Shore Lark took some finding, mainly as it was distant and particularly fond of feeding amongst the brackish marsh... it was however a beauty and the highlight of my day!

Lastly, I walked to Castle Water, where all I achieved was laying on the bank and nearly nodding off and scanning the scant gull roost that produced limited quality. Anyway, an exhausting day and I was pleased to arrive home two hours later.

I started a bit later than planned today; when I eventually got going, I decided to walk the fields, woods, and eventually, the heaths to the east of Midhurst, ending up conveniently at Heyshott and Ambersham Common. As it was a new area between Midhurst and the commons, it was very enjoyable, although the birds were somewhat lacking.

Six Bullfinches were found along the way, but at a farmer's field near South Ambersham, I watched a small flock of birds fly in and land, which revealed themselves as Woodlarks! Ten birds were present altogether and showed rather well (30 Skylarks were also spread around the same field); four Crossbills also flew over. On Heyshott Common, a small group of Dartford Warblers were present. The light had sadly gone by mid-afternoon, so I called it a day. 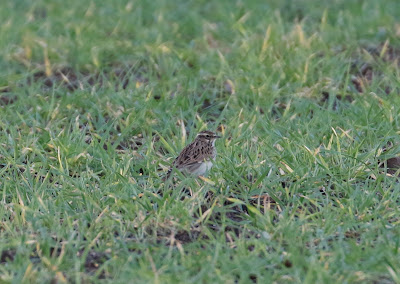 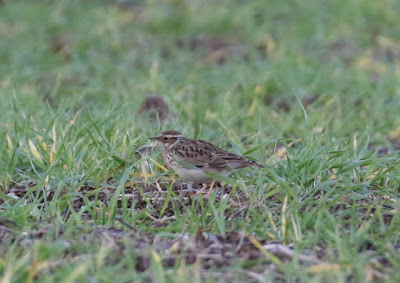 With the appearance of a few Parrot Crossbills in the UK, I thought it was best to scour through the Crossbill flocks of NW Sussex. Stanley Common was the obvious go-to place and before even putting my wellies on, a flock of eight landed above the car. Throughout the morning, I had counted around 80 individuals, including an impressive flock of over 50! A large flock of Siskins were also present, but only a single Redpoll was noted.

Nearby to Stanley, I spotted a large Chaffinch flock in-flight when driving, so I quickly pulled over. Being close to a school wasn't ideal, so I didn't stay long and daren't got the camera out, however, when the birds took flight (they were out of sight when feeding) I counted five Bramblings in amongst them (including some spectacular males). With the West Dean flock last week, I wonder if this year will see Sussex getting a big flock. The last big Brambling flocks I saw were at Kithurst Hill and West Dean... good times! 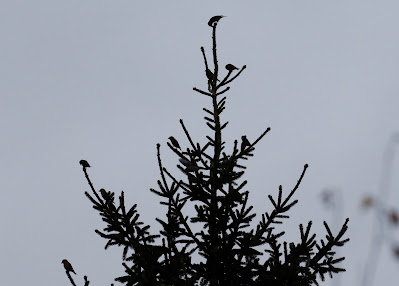 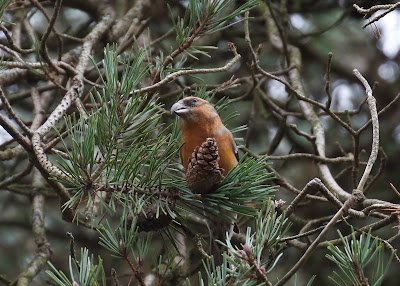 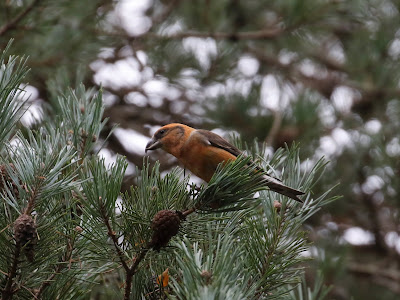 As this afternoon was so pleasant, I decided to drive half an hour down to West Dean Woods, arriving around 1pm. I walked a large circuit and at some point ended up near the South Downs Way. At around 2.30pm, a large flock of Hawfinches flew into the trees above me and continuously fed and flew around for at least another half an hour. I obtained some superb views of them, and at one point, a minimum of six Bramblings flew in too.

The birds then flew off, but I was certain that I was close to their roost site, as soon after, another flock of seven came into the same area, resulting in no fewer than 34 Hawfinches! 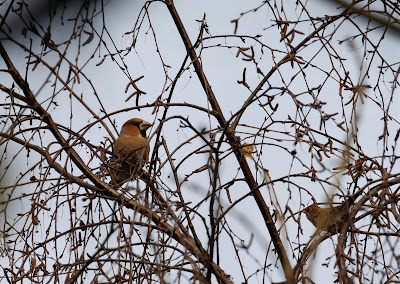 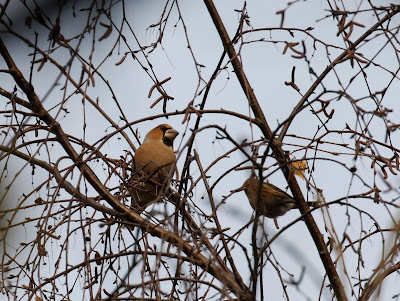 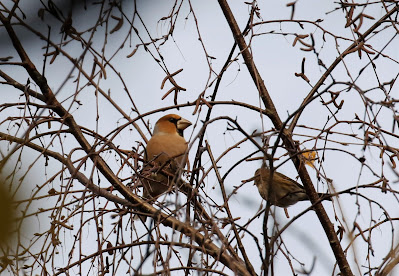 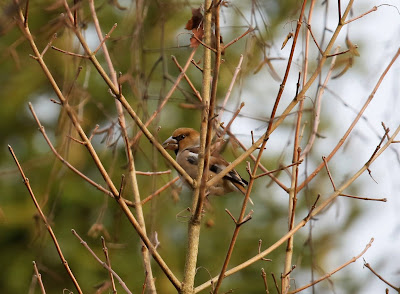 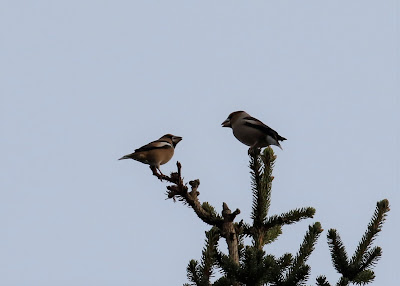 After last weekend's failure to see the Little Bunting at Thursley Common, I was keen to give it another go today where I was hopeful that very few people would be present and I would have the bird to myself... if I could find it. The bunting, from last weekend onwards, had re-positioned to another side of the reserve, so I waited here for maybe two hours finding only a handful of Reed Buntings and several flyover Woodlarks and Crossbills.

Another birder came up to me and said he had seen it briefly before it flew high and south, so despondently, I slowly ambled back towards my car on the opposite side of the common. Now back at the moat where the bunting was first located many weeks back, I mused to myself as to why there would be a reason why it wouldn't have returned here, and moments later, that metallic ticking call sounded from the stretch of boardwalk I had concentrated on last weekend. Immediately, the Little Bunting was on view and showed respectively for five minutes before an annoying couple came along a dead-end path and flushed it. 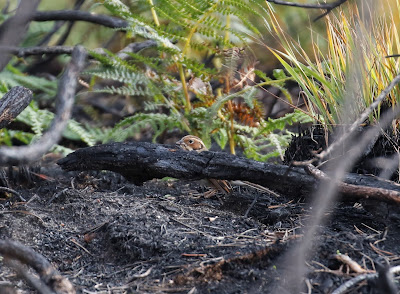 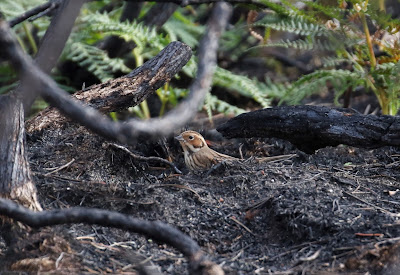 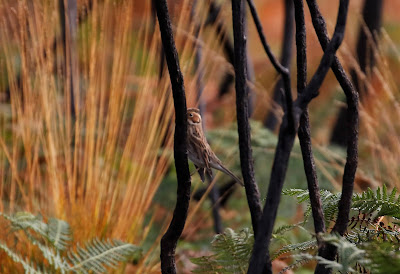 After an early start travelling down to Splash Point for some patch action, I left somewhat disappointed with the lack of return for my efforts. Thankfully, the Dusky Warbler was obliging on my way home from saying farewell to the family (and Jasper) for a month; the bird showed almost immediately on the outskirts of Crawley and was heard calling on a few occasions. Sadly, it was typically elusive in amongst the foliage, therefore, my pictures were somewhat poor.

So, that's it for a month! Hopefully I'll get some December 'gulling' in after lockdown, but between now and then, it's bonjour to you all.

p.s. Hoping for the Stonechat results this week, that's if the sample didn't get lost in the post! 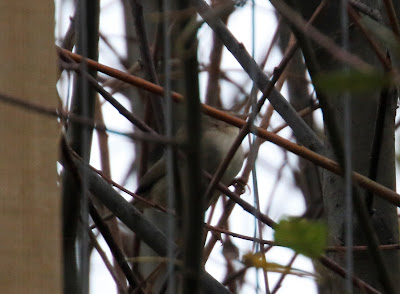