A brief visit before work early afernoon resulted in great views of 5 Purple Sandpipers on the East Pier in Newhaven. They were very tame allowing some ok record shots.
. 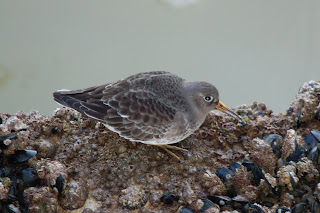 Other birds of note included singing Skylarks and a dozen Redshank on Mill Creek.

Did my WeBS count this morning from Southease Bridge down to Piddinghoe Pond and back. Weather was dreadful with constant heavy rain with a light northerly breeze making it seem colder then it actually was.

Nothing special was recorded but a fair number of species was recorded with the main highlight being an adult Egyptian Goose that was seen on Piddinghoe Pond before taking off and flying south down river.

Another unexpected highlight was a Common Seal seen several times between Southease and Piddinghoe.
Posted by Matt Eade at 04:20

Finished work early today, and as the weather was nice i decided to go and have another look for the Crane between Southease and Piddinghoe. It had been seen earlier in the day so my hopes were high for another sighting of this superb bird.
Arriving at the site where i saw it on Saturday i soon relocated the Common Crane, but this time in a field much closer to the river bank. The light was good with very little wind so there would be a good chance of a more clearer picture.
The Crane showed very well, almost filling the view through the scope. Attached is the best photo i could get, which is slightly better than the one i had taken on Saturday.
I stayed for about half an hour. Driving away from Southease bridge i noticed a very large bird flying towards me so i quickly brought the car to a halt and watched the Crane fly right over me heading towards Rodmell. Awesome bird! 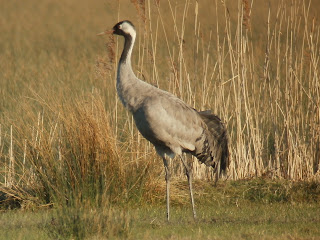 After the Crane was first seen last Friday in the Ouse valley today was my first available day after a long week at work.
I arrived at Southease at 9.15am and started walking south towards Piddinghoe. The only birds around were Fieldfares in the nearby fields and Buzzards in the distance. Meeting Bob Self and Chris Brown halfway down the river we scanned all the fields where the Crane had been seen yesterday, but there was no sign anywhere. After hanging around for a while it was obvious it was not present so we walked back to Southease in the biting wind.
I decided to stay by the car to try and warn up before i walked back down to have another look. Whilst leaning against my car a large raptor caught my eye as it slowly drifted north. It was a superb Red Kite, unfortunately being mobbed by corvids. It slowly moved on and lost to view. 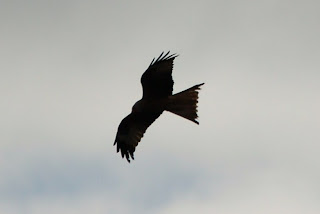 Red Kite at Southease
After a long wait, my phone rang and the delightful news of the Crane reappearing was recieved. Getting all the gear together i again started the long walk down river and eventually arriving at a sensible location to view the Common Crane without causing any disturbance to the bird. I hung around for about an hour taking in all the beauty of my second Sussex Crane. 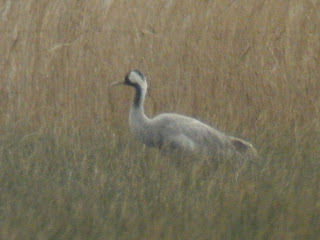 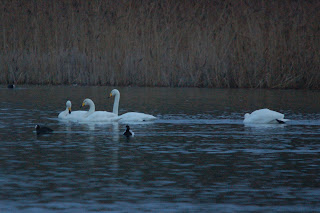 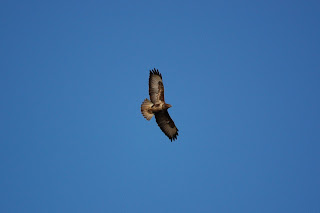 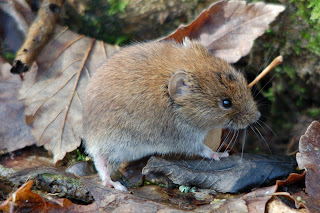 A quick afternoon walk down the Cuckmere today was pretty hopeless. The only birds of note was a Knot, 5 Dark-bellied Brent Geese, Raven and a Rock Pipit.
Posted by Matt Eade at 08:41

A great days birding with a total of 92 species seen altogether. Started of at Ivy Lake, Chichester GPs and quickly found the drake Red-crested Pochard in the centre of the lake. Briskly walking towards Runcton Lake a Weasel jumped out in front of me. On Runcton Lake the drake Smew also was another good bird for the early morning.

Next stop was down to Selsey Bill. On arrival a fellow birder had seen nothing offshore, but when i looked out to sea a Great Northern Diver was present, aswell as a close in female Common Scoter. Scanning round more another Great Northern was picked up and 7 Red-throated Divers flew east.

Church Norton was hopeless with just another Great Northern and Red-throated Diver offshore and 30+ Mediterranean Gulls along the shoreline.

Next stop was Fishbourne Creek. Birds seen here included the long staying Little Stint (i also saw this on the 3rd Jan), a Water Rail and a Bar-tailed Godwit with also a Firecrest singing around Apuldram Church.

Next was West Dean Woods where along the track heading towards Moncton Farm a large finch flock included 250 Chaffinch, 15 Brambling and Yellowhammer and a Reed Bunting. No Hawfinches unfortunately, nor Red Kites although there is still plenty of time this winter to catch up with these. 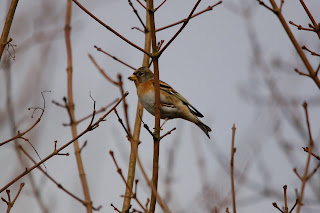 Burton Mill Pond was the second to last site for the day. Obviously for the long staying Bitterns and with a 20 minute wait i managed to somehow spot one on the right hand side of the pond out in the open. There was just enough time to head down to Coldwaltham Brooks and see a Barn Owl hunting.
Posted by Matt Eade at 08:11