I think it was back in 2019 that Richard Fairbank and Nick Preston were arranging a private tour to SW Amazonia, with a hopeful departure set for spring of 2020. They very kindly invited myself along and Paul Noakes too.

From the off, the itinerary sounded fantastic with a wealth of new birds on offer, including some I'd never heard of. But there were some highly sought-after species on that list too; critically endangered species such as Rondonia Bushbird, and recently described species, were all enticing enough for me to give Rich and Nick the nod.

Of course, nowt happened in the spring of 2020, and with 2021 out the question too, it was 2022 that would be our year, and it was worth the wait. Over the next five blog posts, I will outline the highlights and a number of photos. It's worth stating at this stage that the overall experience was, for me, slightly depressing, and at times, mildly upsetting. Deforestation is rife in the state of Rondonia and to watch it in action was tough to observe. It was a different situation in the state of Acre (a state which straddles Bolovia and Peru), however, as pretty much everywhere had been cleared many years ago, with only small pockets of decent habitat remaining. It was apparent that the wildlife we were watching would not have a home for too much longer!

On a brighter note, it was a successful trip and I recorded 270 new birds and I'm yet to tot up my overall total. It was also great to meet Mike Catsis, Chris Goodie (author of 'Jewels of the Forest') and Andy Mears, whilst we were based in Humaita.

The success of the trip was very much down to Brad Davis, owner of Agami Nature Tours. Being Canadian, he spoke perfect English, was very friendly, and one of the best guides I've come across; for a whole suite of reasons, his bird knowledge was immense!

On the 26 May, I departed LHR late on and arrived on time into Sao Paulo. It was a tight connection to make the onward journey through to Porto Velho (Rondonia), not helped by the need to recover my luggage and checking it back in again, but I made it and all was well. Nick, Rich and Paul were already out in Brazil visiting Amazonia NP, a site that initally drew me to the trip, but limited annual leave denied that!

I got a cheap taxi to the hotel, settled down for a bit, then walked down to the Rio Madeira to see what I could. I purposely left my optics behind just in case it attracted any unwanted attention. I was pleased to see Black-collared Swallows, White-winged Swallows and a pair of Red-bellied Macaws for my efforts, whilst from my bedroom window, Silver-beaked Tanagers, a Short-crested Flycatcher and several Chestnut-bellied Seedeaters were viewable from the seventh floor. A huge male Green Iguana was a late surprise as it roosted.

It was an earlyish start for me (mega early for the others) as the other three and Brad arrived from Manaus before it got light. They met me at the hotel, and after a quick bite, we drove a short distance north to a forest patch. We walked a newly opened logging trail, which although is good for birding, it sadly means the end if nigh for this particular forest patch, although it will have a few years of freedom yet hopefully.

The first few hours were highlighted by one of my main targets, the superb Hairy-crested Antbird! In tow were White-throated and Black Antbirds, whilst in the treetops, Yellow-throated Flycatchers, Paradise Tanagers, White-throated Toucans and Amazonian Pygmy Owls were seen. Bonaparte's Parakeets also kept us on our toes and eventually showed well.

Not a bad start at all and further additions came relatively thick and fast with Chestnut-winged Foliage-gleaner, Amazonian Barred Woodcreeper, White-fronted Nunbirds, Inambari Woodcreeper, Snethlage's Tody-tyrant and a small troop of Red-chested Tamarins (by far the highlight for me).

After the trail, we then walked the road in the increasing heat, but scored well with a great view of a Western Striolated Puffbird, Short-tailed Pygmy Tyrant and a Fasciated Antshrike which refused to show poorly!

After lunch back in Porto Velho, we again returned back across the river and worked a different track into a patch of white sand forest. This once flooded landscape, however many years ago, supports a number of specialist species, with white sand stretching all the way north into Guyana. Here though, hoped for targets seen comprised horrific views of a Humaita Antbird, a few Predicted Antwrens, several Campina Jays, a Fuscous Flycatcher and a Bluish-fronted Jacamar.

Time was getting on and with a damp, bumpy track to negotiate, we headed back in the low light and back into Porto Velho where we stayed the night. 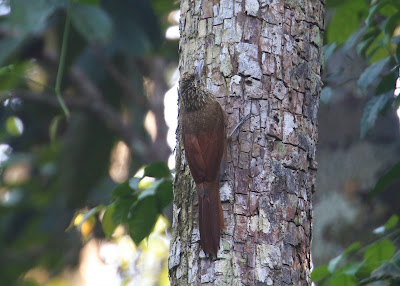 We started the morning off at the same location as we did yesterday, but this time concentrated along the road. Tings started brilliantly as a Crested Owl was heard, and then seen, as it responded well to playback. A Starred Wood Quail sang from the deep, as did several tinamous, so we walked the road to see what we could find. Despite hearing an Undulated Antshrike, it remained well and truly elusive, with Rich being the only one to see it clearly enough for a solid tick.

Further on, a duo of antbirds comprised both Sooty and White-throated (much to the relief of Rich), with the former showing brilliantly. A White-necked Puffbird, a small group of funky Curl-crested Aracaris and a Double-toothed Kite all showed well too, but perhaps the star of the morning were a small group of White-bellied Parrots; really cool looking and perhaps the highlight of the morning, especially as they showed far better than the overhead Dusky-headed Parakeets.

On our return, a Scaled Woodpecker was watched feeding amongst the twigs of an overhang, and after watching a White-necked Thrush, a small mixed flock were located and included Rufous-bellied Euphonia, Paradise Tanager, a Peruvian Warbling Antbird and a Glossy Antshrike.

This pretty much rounded off our morning and we were soon ready to hit the road bound for Tabajara, which was roughly a five hour drive with a few highlights seen along the way... next blog post. 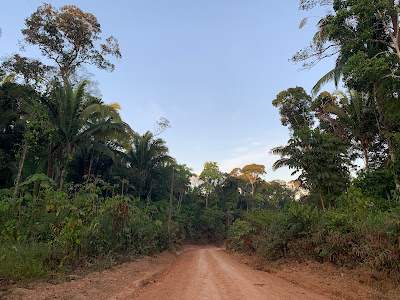