With work this morning I only managed to get to the harbour for midday. Despite searching for a while I eventually found the Black Guillemot, and a superb county tick it was to, and a welcome relief after dipping the Worthing bird by a few minutes back in 2015. Whilst searching for today's bird I glanced out at sea with my bins and a long way out sat a white-winged Gull that was obviously a Glaucous Gull and thankfully it followed a boat into the harbour and landed on the flats nearby. My camera decided to die after three shots and the bird soon flew off out to sea not to be seen again. The Black Guillemot continued to show nicely for another hour.
Afterwards at Newhaven Harbour the Great Northern Diver was still present.

On Sunday after work I went to Staines Reservoir for the Horned Lark, maybe a potential IOC split one day. 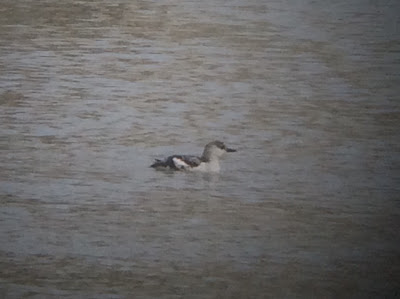 With very few Gulls assembled in Newhaven Harbour this morning I moved over the Harry's Bush, Seaford Head where I scanned the few Gulls that were there (not the hoped for 5000 Great Black-backed Gulls that roosted at Dunge last night) and to my delight a first-winter Caspian Gull was present, but not for long as it flew off five minutes after finding it. It had a yellow colour ring on its right leg so I presume its of a German origin. A couple of argentatus Herring Gulls were also present and a North Thames Great Black-backed Gull was also seen, but too distant for any detail.

Afterwards I quickly checked Harry's Bush and to my surprise there was a very showy Continental Coal Tit in the Tit flock there. 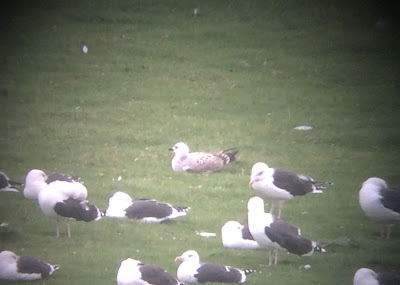 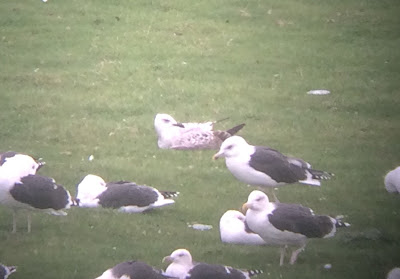 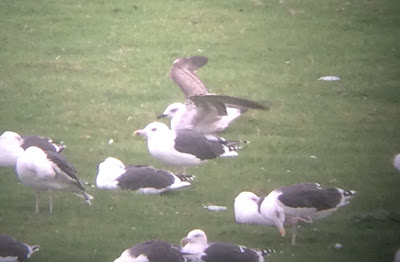 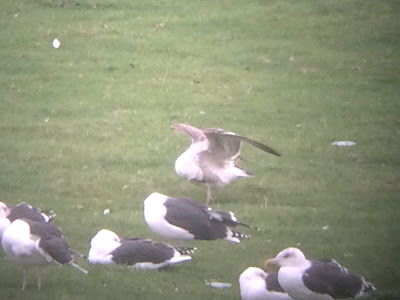 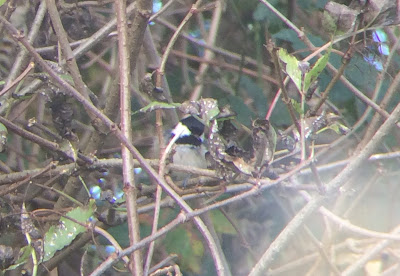 Another independent Eade tour devoted to finding 4-5 targets in southern Spain. Planning was very easy with regular up to date sightings on eBird for my main targets, and with staff travel flights (return to Seville) and cheap hotels for two out of three nights (slept in car the first night) it worked out costing around £160 for the trip. Key birding sites were navigated too using the app maps.me which is very accurate but a bit misleading when it comes to motorway exits, but enough guessing gets you there. Even better it can run on airplane mode meaning no data is being used on the phone.
Landing early afternoon I quickly picked up my Budget hire car and drove north for 50 minutes to Rio Viar seeing the following highlights:

I then headed further north to Guadalcanal where I based myself that night. Birding the cultivations north of here produced a good abundance of farmland birds. The following was seen:
Chough - 2
Iberian Grey Shrike - 2
Iberian Green Woodpecker - 2
Crested Lark - 50
Azure-winged Magpie - 50
Dartford Warbler - 3


As light faded I grabbed some cheap food and found a suitable lay by, that was until I got woken up by the police knocking on my window at midnight. All was good and despite it being 5 degrees outside I had a reasonable nights kip.
Dawn broke at 7.45am and I again birded the same area as last night seeing plenty of migrants overhead including some surprise Bramblings. My main reason for being here was to see Spanish Imperial Eagle, seemingly a good wintering area. No doubt I had to wait for it to warm up so I drove up to a Mirador surrounded by olive groves which turned out to be a alive with birds. Over the next couple of hours the following was seen: 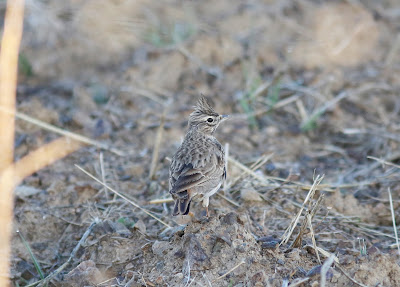 With no Eagle and wanting to carry on I headed SE for two hours (Black-shouldered Kite being the highlight) where I ended up in the middle of nowhere near to Lantejuela birding various cultivated fields and a small birding park, the former supposedly supporting a very large flock of Calandra Lark, but despite much driving around I couldn't find any, but plenty of farmland birds however. Walking through one of the fields produced lots of Crimson Speckled Moths and a couple of Red-veined Darters. The park held some waterfowl but nothing special up until dark where I then drove further south to Olvera for my attack at the mountains the next day. Highlights for the afternoon/evening were:


Due to the very cool temperatures in the early hours I didn't leave my hotel until it got light, and with a 45 min drive to the pass above Grazalema, this gave the area time to warm up. The area around Grazalema was very good and I finally clocked my first target, a Black Wheatear, whilst plenty of other bits were on offer: 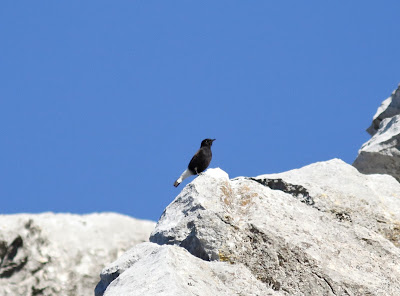 I then had a 2 hour drive to the SE section of the Donana National Park which turned out to be a bit of a dive, but I made the most of it and soon found my second target, a group of White-headed Ducks. Really pleased with this I carried on searching more pools around the area and found some more, plus the following: 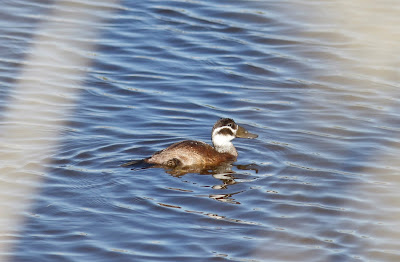 With now time to spare, I plucked on heading around the other side of the park (frustratingly having to go via Seville as no other route option) where I came across around 150 White Storks catching the thermals which saw me driving at 130kph whilst looking up at the Storks through my binoculars. I eventually made it to El Rocio and birded the main lagoon there until dark. I revised eBird and through this found the line of trees a certain Eagle roosts at, and there it was, a superb adult Spanish Imperial Eagle. Despite being distant, a very nice view of this beast and another welcome tick for the day. The lagoon also played host to thousands of Greylag Geese coming into roost that created a lovely sight. Totals for El Rocio are as follows:

I stayed the night in El Rocio and woke up early to scan the small reedbed on the north side of the main body of water. The Eagle was still in the same tree and I got some lovely views of a male Bluethroat. A few other bits about but time ran out and I was soon driving to Seville Airport where maps.me App took me through the centre of Seville that was thankfully quiet, but very scenic.
Totals for the morning are:


The trip ended on 100 species of bird including three lifers as listed below.

A change was due and having not seen a Purple Sandpiper for a while I felt Tide Mills was a reasonable choice. There were 5 Purple Sandpipers on East Pier, 2 Black Redstarts feeding together by the factories, a Brambling and Redpoll flew over and a redhead Goosander flew in off the sea and landed in Mill Creak, stayed for around twenty minutes and then flew off strongly east.

Also recently I've found a few Great Black-backed Gulls bearing colour rings and have had some bits of information back, with the most interesting being an adult bird seen last week that was ringed in 2008 in southern Norway as a juvenile, and being last seen in 2010 in northern France. 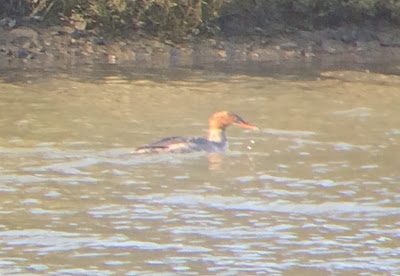 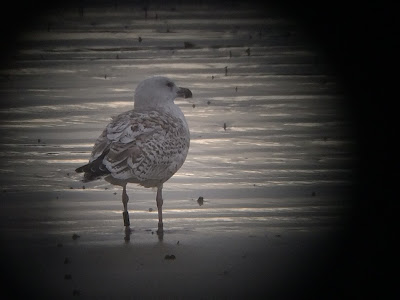 this 2nd winter Great Black-backed Gull (JC383) was ringed in southern Norway on 04/07/2016 and was last recorded on 18/04/2017 further east along the same coastline, having been to northern France for the winter in between.

I started down at Newhaven Harbour where I found three colour-ringed Great Black-backed Gulls and after a bit of patience I managed to get the codes. Other then this nothing happening. A seawatch at Splash Point wasn't too bad after and I ended the morning going through three different Gull flocks in the Cuckmere where I could only find two adult Yellow-legged Gulls. Walking around the area didn't produce anything else of note. 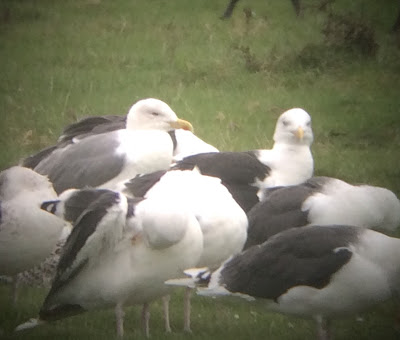 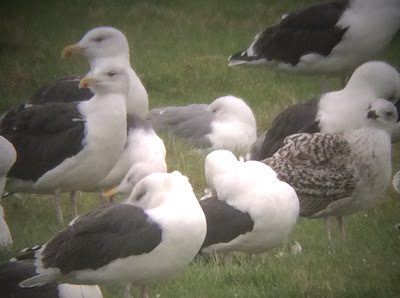 Having luckily found some Hawfinches on the patch this autumn, I didn't feel too bad in going to a recent hot-spot for this species and trying to see some there. Me and Paula set out about 10am and spent four hours around the Sherwood Rough area of what is I presume the Rewell Wood complex. In total I had 10 sightings of varying sized groups and counted 56 Hawfinch in total, the majority or if not all being different due to the rate of sightings. A very impressive haul of one of my favourite species. After a cracking carvery at The White Swan in Arundel, a quick look at Swanbourne Lake produced two Mandarin Ducks. 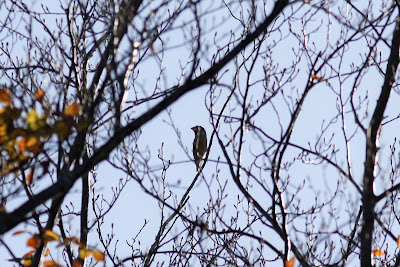 the first of 56 Hawfinch seen 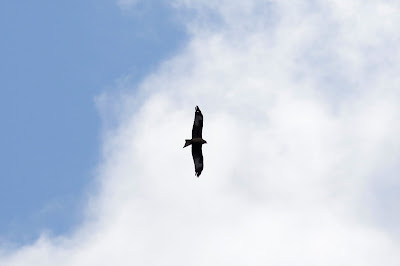 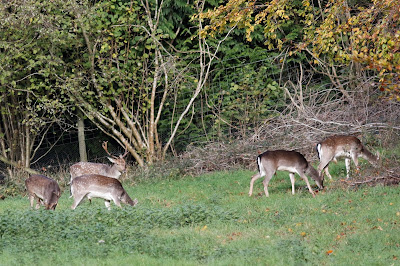 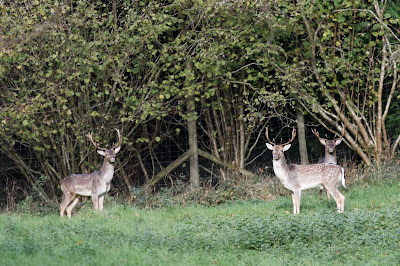 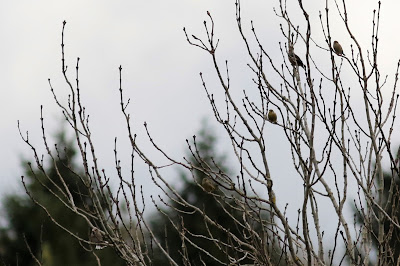 only two Hawfinches in this image 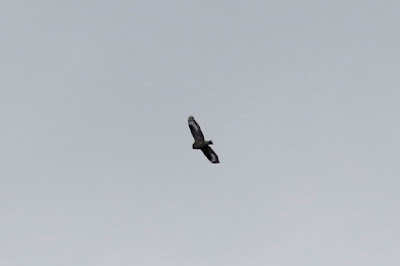