It's fair to say this was the most anticipated few days of the trip. Where else are five species of antpitta on order? Add to this a fantastic supporting cast and a few surprises ensured my 2-night stay at the lodge was some of the best birding one could hope for.

I left Bella Vista late morning and descended to the main road, via a stop at some hummingbird feeders where at least three new hummers for me were present: Purple-bibbed White-tip, Booted Racket-tail and Sparkling Violetear. It was only a short drive to the entrance to Refugio, so I retraced my steps and found lunch and fuel. I then made the journey up the rough track and after 5km arrived at the lower part of Refugio Paz de Las Aves. There was no one around so I spent some time at the feeders and walked a trail into a small wood finding Crested Guans, a Swainson's Thrush and Golden-headed Quetzals.

I got concerned my message of staying hadn't made it through, so I contacted both Dave Cooper and the organiser to find out if I was in the correct spot. It turned out I wasn't and the accommodation was just up the road, which is where I soon found myself, with my guide for the afternoon. He asked me if I wanted to look at some tanagers or go a see the Cock-of-the-rocks... silly question and the Cocks it was to be. Despite seeing them on the other consecutive days, this afternoon they showed at their best and what a spectacle it was! Also here was a Hook-billed Kite and Fawn-breasted Tanager!

Later that evening Angel took me out for some unsuccessful owling, which was a shame but is typical for me. However, watching flying Lyre-tailed Nightjars was a life ambition complete!

On Tuesday 15th March, I spent the day with Angel and his team and had them all to myself! First stop again were the Cocks which were awesome, and then, Angel called in his good friend, this being a Dark-backed Wood Quail. Next on order (it felt like this) was Maria. Roughly two weeks before I left for Ecuador, I saw that Maria (the Giant Antpitta) was on a nest... this is when I stepped into action and booked myself with Angel as the sighting of this mythical beast was almost guaranteed. Thankfully, this stayed true and right next to the path, there Maria was on her nest. However, it soon scarpered and unbeknown to me this was the first time in 10 days Maria had left the nest, and she performed superbly for five minutes before we left her... I felt very lucky! Next up were two obliging species of antpittas with both Yellow-breasted (slightly underwhelming if I'm honest) and Ochre-breasted Antpittas responding well, but no Moustached. Another notable sighting was a stunning Lyre-tailed Nightjar!

The next day, I only had the morning with Angel and Moustached Antpitta was the only bird I wanted. However, a young Swiss couple had also booked Angel and so we met again at the Cocks. The young couple (Mikael & Annie) were spending six months travelling/birding in Colombia, Ecuador and Peru and were a joy to be with. Mikael had actually been in contact with me last year asking for PNG details, so we had spoken before. It was great meeting them and hopefully we will reconvene in the future somewhere.

Anyway, after re-visiting Maria it was time to try for the final time at the Moustached Antpitta site. We had just about given up and resorted to observing some Uniform Antshrikes, when out of nowhere Angel starting waving frantically, so we rushed down and metres away stood a blooming Moustached Antpitta! It was a class bird, hopping furiously across the opening area and collecting its reward for performing, before melting away back into the forest.

That was about it for my time with Angel, and I left with a further five antpittas under my belt than before I had arrived. 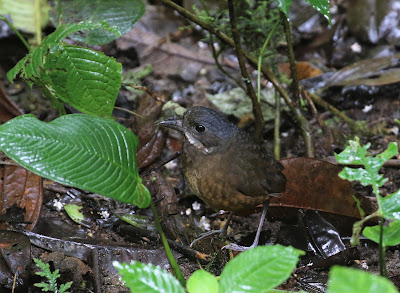 After my first full day at Yanacocha, I took the long and receding mountain road and valley down to Tandayapa, before ascending once again up to Bella Vista. The drive was concerning to say the least. Recent rainfall had sent some parts of the road down into the river below and my car, which wasn't entirely best suited, coped well. Many stops along the way were excellent as heaps of new birds were found at each stop. I then had three nights at Bella Vista where I spent all my time on the network of trails or along the access track.

The many stops along the valley towards Tandayapa was overwhelming to say the least, and thankfully for the birds. Amongst the many Blackburnian Warblers, I was pleased to find a wonderful variety of birds, with Tyrannine Woodcreeper, Mountain Wren, White-winged Tanager, Blue-winged Mountain Tanager, Brown Violetear and White-winged Brushfinch. After getting stuck only once and dodging the gaps in the road, I then ascended the track up to Bella Vista finding yet more goodies as I went through the varying altitudes. I then happily arrived and met the owner Richard, and whilst he was talking, all I could concentrate on was the onslaught of hummingbirds buzzing around my head. Being my first experience of such a site, I was like a kid high on sugar... so excited and constantly smiling! What a treat to hand feed myriad species of hummers, including the incredible Gorgeted Sunangel, Violet-tailed Slyph and Collared Incas.

Over the course of the 12th and 13th March and the morning of the 14th, I was always up early and worked the top trail which leads past a compost area which was excellent for Sickle-winged Guan, a Chestnut-crowned Antpitta and a pair of Tayra! I then just spent all day out on the trails where I think I came across a decent selection of birds – even the local guide was impressed with my haul so I must have done OK. Certainly the highlight of my visit was the aforementioned antpitta, however, I was particularly pleased to see Plate-billed Mountain Toucan, Streak-headed Antbird, Yellow-bellied Chat-Tyrant, Green-and-black Fruiteater and Olivaceous Piha. The forest was also echoing the sounds of Spillmann's Tapaculo, a highly secretive bird which showed on only two occasions. The forest was however active with several passing mixed bird flocks, while around the lodge, Masked Trogons and a good helping of flycatchers and tree-creeping birds were in abundance.

Another main feature of this lodge is its nocturnal wildlife. Although Kinkajou are fairly frequent visitors, to see an Olinguito was very special indeed. Only described to science in 2013, this range restricted species was a nightly encounter at the feeding area. Such a special mammal!

I guess the biggest event was getting completely lost on the trail which descended down the steep hillside, through the forest, and eventually onto the access track. Several landslides had resulted in the path disappearing and having to clamber through fallen trees. Not ideal, and I couldn't turn around as it was a near-vertical ascent back up. Therefore, I just ploughed through knowing I would eventually make it to the road, which I did. A good job I'm nimble otherwise this is just another scenario where I could've been food for the many forest-dwelling creepy crawlies. Why can't I just have a normal walk!

Anyway, the highlights from my time at Bella Vista are as follows: 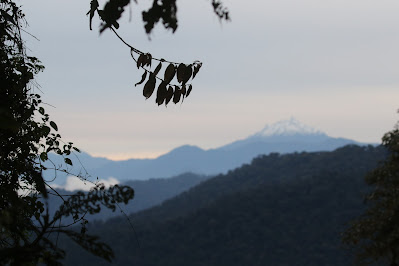 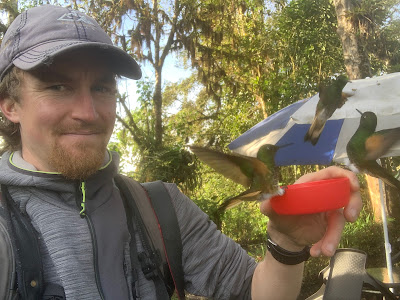 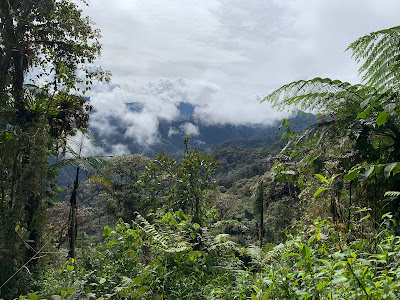 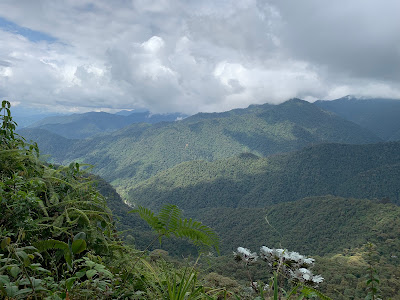 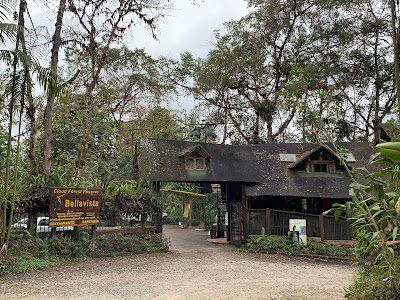 On Thursday 10th March, I set off to Heathrow in the early hours bound for Quito (via Amsterdam). The flight was very long but I touched down in Quito in the mid-afternoon, cleared customs very easily, grabbed my standard hire car from Europcar and set off on my first non-work foreign birding trip in over two years!

As it was still light, I drove halfway up the mountain heading east to see what I could find in the fading light. In honesty, it was underwhelming but was saved by a high-flying flock of Andean Gulls, a species I wasn't to see throughout the remaining ten days in country.

After dinner and stocking up on water and food items, I found my hotel close to the airport and called it a day, very much looking forward to my holiday!

I woke up early and thought I may as well start making my way up to Yanacocha, which raises up to the west of the city. I was nervous about the drive as I was unsure whether my car would be up to dealing with the mountain/hilly roads, but thankfully it did a blinding job and managed well. There was the odd occasion on this first morning I had to get out and test the ground, but all was well. Driving around Quito was fine and up to the site worked out very well and I helpfully arrived just as it started to get light.

As the gate was shut (opens at 7am), I walked the road and found a few Andean Guans, Yellow-breasted Brush-finches, Great Sapphirewings, Tyrian Metaltail and the ludicrous Sword-billed Hummingbird!

Once the gate had opened, a guard explained the site was in fact closed. I said "fine" or to similar effect, but waited until he had continued before I invited myself in (there was no way I was not visiting). Walking along the access road to the main parking area I heard another guard approaching on his bike, so I quickly hid in a bush, waited until he had passed, and continued on walking. Once at the parking area, another gate was shut, so I waited for a bit watching some stunning Scarlet-bellied Mountain Tanagers, Shining Sunbeams, and best of all, a Tawny Antpitta! However, I needed to get through the gate. Some more guards came along and waited by the gate whilst I hid behind the sign... I hid for ten minutes(!) before they were let through, but then the guard shut the gate once they had. I therefore gave up this time wasting and climbed the gate and dashed down to the first corner... PHEW, I was in!

I'm glad I made the effort as it was an excellent site. A single track on a steep, forested mountain side, birds came thick and fast with by far the highlight being an Ocellated Tapaculo, which emerged from below me as I 'psshhd' away. This mega attractive bird was the only one I saw and is never guaranteed on a visit to Ecuador. Also, Aplomado Falcons had a nest, two species of pufflegs were great (sadly no Black-breasted) and a Blackish Tapaculo showed briefly. A decent landslide (the reason for the site's closure) stopped my progress, but I was relatively happy with the birds and the views.

I then sat at the headquarters and entertained myself with watching hummingbirds and whatever else came in. Buff-winged Starfrontlets, Tyrian Metaltails, Sword-billed Hummingbirds and sublime Sapphire-vented Pufflegs were first rate. A Crimson-mantled Woodpecker was also stunning... a great start to my time in Ecuador!

I left Yanacocha late morning and made the slow progress towards Bella Vista via a relatively dangerous mountain road, where constant landslides had only recently happened. All this and the birds from Bella Vista will be in the next post. 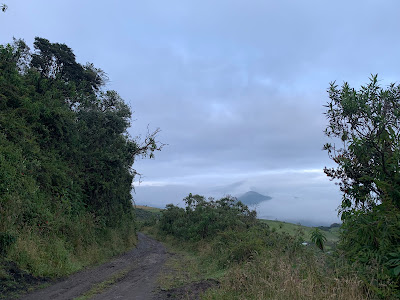 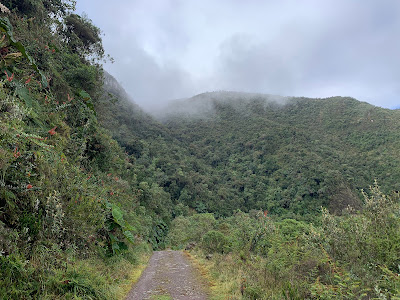