This is the second blog post on my current trip to Nepal. The first 17 or so days was spent undertaking the trek to Everest Basecamp. The company we used was 'Nepal Promote Treks', and Saroj the owner, was superb throughout.

This post continues the trek, ascending north from Namche Bazar and heading slowly but surely towards Basecamp. We were among the upper reaches of the treeline, but from now on there was plenty of both descending and ascending. This suited me as I could create quite a lead from the others to savour some of the mouth-watering species that can be found at these altitudes.

I started the day the same as yesterday, by walking the valley to the west of Namche. Once again, there was a fine selection of species on offer, despite the temperature being well below zero.
After breakfast, we started the long and arduous walk to Deboche, taking in the superb scenery up the valley in front of us. One of the biggest surprises whilst walking the mountain ridge was a Hen Harrier, that circled above me and drifted down the valley. Descending down towards the river for lunch took us through some superb forest, and several Tit flocks comprising of a few species were encountered. On the ground were a couple of Black-throated Thrushes and White-throated Redstarts.
After lunch, the perilous climb up to Tengboche monastery commenced, and I feared that I had walked the hill too quickly. I soon emerged out of the Rhododendron forest and had failed to locate any Blood Pheasants (though it was a good job we returned this way!), and sadly little else. After a break after what I considered to be the toughest climb of the trek, we descended down to Deboche where thick snow was immediately apparent. I let the others continue on whilst I climbed up to another viewpoint, and then traced their steps. Although quiet, patience was soon rewarded by a trio of Red-headed Bullfinches. This minor excitement sent me sinking into the snow as I tried to encroach, adding laughter to one of the porters.
Our stay at Paradise Lodge was thankfully for only one night. It was the worst place we stayed at, not helped by the cold. Evidence of this was our water bottles freezing in our rooms overnight, and the inside of our windows being covered in thick ice. The only positive note was the unbelievable spectacle of the night sky...….wow! 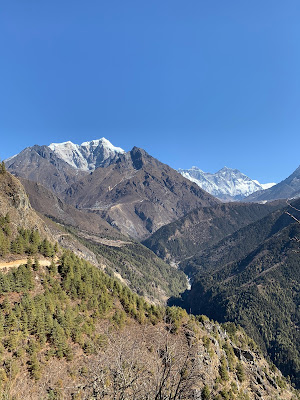 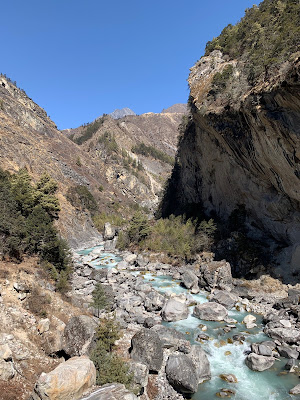 A shorter day, though still with its tough parts. We mercifully departed Paradise lodge (after a lengthy thawing-out session) and continued up the spectacular valley. The views were just amazing, and it was just as well, as we soon left the trees behind us, and that meant fewer birds. There wasn't a great deal to report along the trek to Dingboche, and after settling in to one of the many lodges on offer, I got my boots back on and walked further up the valley. Dense low scrub dominated the riverbanks up the valley, and here I found some brilliant birds. Having done limited research, I was staggered to find a good number of Guldenstadt's Redstarts. The males were very territorial - this being very helpful for me as the males kept finding my birds for me. Among the Black-throated Thrushes was a single Red-throated Thrush, many Robin Accentors and Beautiful Rosefinches.
I retired back to the lodge and chilled for the remainder of the day. 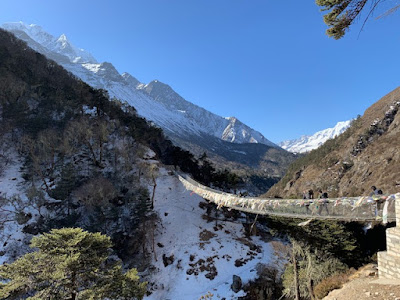 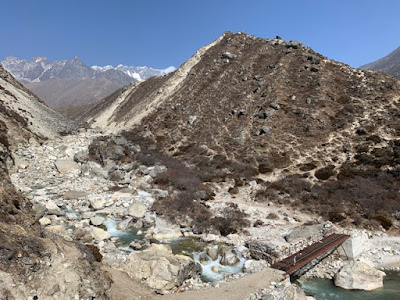 I went out early morning once again, walking to the same set of bushes I ventured to last night. Yet again, there were plenty more Redstarts and Accentors of varying species. As brilliant as these were, whilst heading back for breakfast, I heard a pair of Tibetan Snowcocks calling on the slopes above me. A frantic scan revealed nothing, but after another bout of calling, a pair of Snowcocks flew along the ridge and landed just about in view, albeit at some distance away......result!

After breakfast, we hiked up a steep hill above Dingboche, preparing us for the next few days. Once this and lunch was completed, I again went solo and walked two hours up the valley towards Island Peak. I noticed a glacier earlier in the day, and after a strenuous effort at a now very difficult altitude, I got lovely views. I was unsure as to where my energy was coming from, but having it meant I was able to venture to different places. I was fairly exhausted after this four hour venture, and so chilled for the rest of the evening, ready for tomorrow's assault. 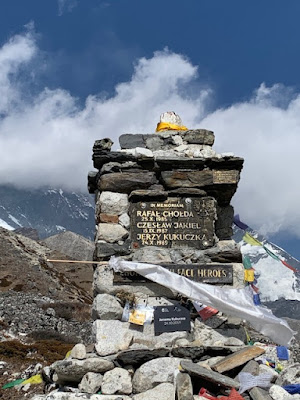 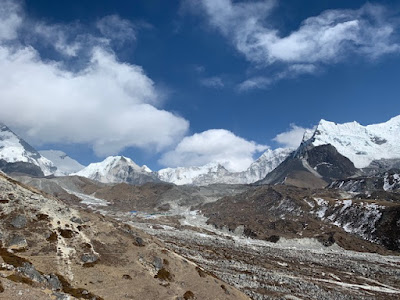 Back in 2017, I got asked along on this very same trip, to trek to the famous Everest Basecamp. Sadly, other commitments meant that the 2018 trip wasn't possible for me, neither was 2019 due to being in northern India. Thankfully, my ex-work colleague was attempting the trek for his third and last time, and this was enough for me to join him and eight others.

The other participants were mostly ex-work colleagues, whilst others were friends of a friend, etc. All turned out to be excellent trekking companions, and over the course of the trek, we all got along very well. All were very accommodating to my birding obsession, with some even expressing considerable interest - especially when a Himalayan Monal showed itself.

Over the next few blog posts, I'll be outlining the individual days, and of course the birds and other interesting aspects that occurred along the way.

I landed into Kathmandu in the early morning and cleared the new and 'improved' visa for immigration. Once I had collected my bags, I waited half an hour to be picked up by our trekking leader, and of course my old work mates. The rest of the day was mainly spent chilling, eating, and gathering all of my gear ready for days ahead.

An early awakening and we were off to the airport for our short flight to Lukla. Before this trip commenced, I was very much aware of this airstrip and its ranking in the 'world's most dangerous airports' category. Thankfully, it all went according to plan, and we had landed at Lukla airport and began our mission.

Our target for today was to reach the settlement of Phakding, roughly a four to six hour walk depending on the speed, or how many birds there were. The views from the off were incredible, and a slow pace was appreciated to witness some excellent birds. By far the highlight (and within the first hour), was a brief encounter with a stunning Fire-tailed Myzornis - a species that in theory I shouldn't have seen so easily, and it turned out to be my only sighting.

Once we had reached Phakding, I wandered off to the river, searching in vain for an Ibisbill, but all I could muster were some White-capped Redstarts. 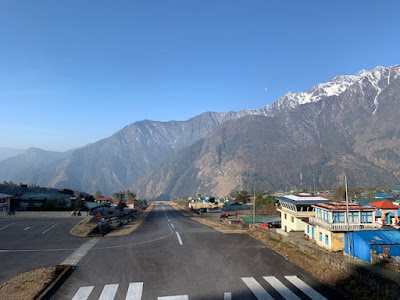 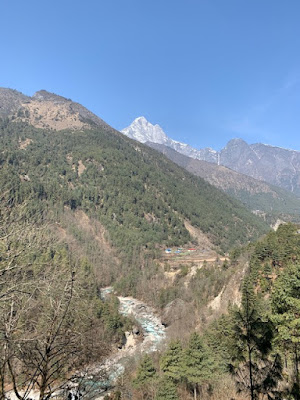 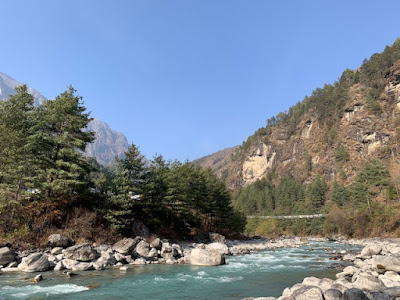 Today was an extremely long trek, mainly due to the fact that the altitude difference from start to finish was significant. We crossed the river on many occasions on the trusty swinging bridges, and once lunch was had, we took on the arduous climb into the clouds towards the town of Namche.

Before lunch, the lower altitude birds similar to yesterday performed nicely, but when a Wallcreeper popped out of nowhere I raced towards it uphill, and out of breath, I admired this overdue new bird. The snow-covered peaks above revealed the first of many Himalayan Griffon Vultures, with the single sighting of a Lammergeier providing the most excitement. The long climb had taken us straight into the pine forests, and this is where I encountered my first male Himalayan Monal - the national bird of Nepal. Being fitter than everyone else, I raced up the hill creating a large gap and therefore was able to enjoy not only the monal, but also a tame party of Kalij Pheasants.

It was nearly dark when we arrived into Namche, but the accommodation was welcoming with its heaters. 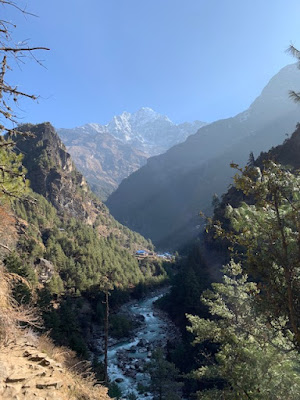 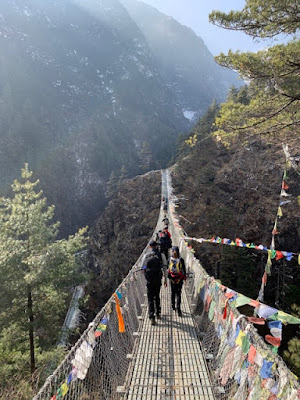 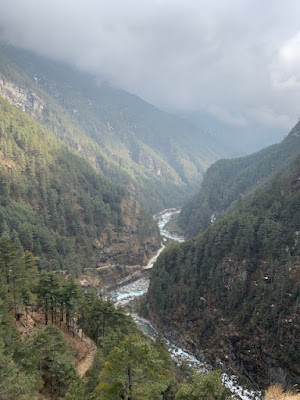 I was up nice and early and walked a valley to the west of Namche, later returning for breakfast. Despite the seriously cold temperatures, I notched up a decent species tally. For the bulk of the day, as a group, we ascended 1000ft and finally laid eyes on Mt. Everest that appeared many miles away, though at least gave us inspiration for the gruelling days ahead. The remaining hours were spent in a bakery eating chocolate banana cake, and then walking the same valley as I did this morning. 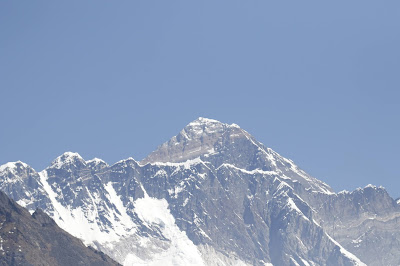 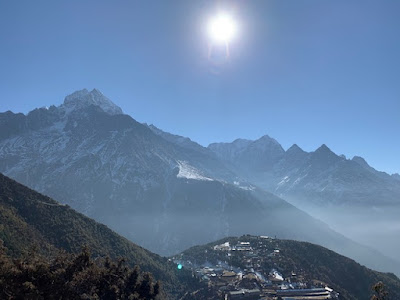