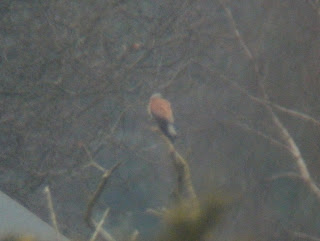 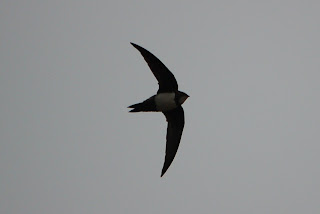 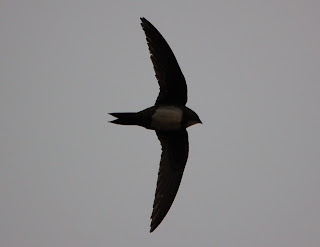 With the awesome news of an adult male Lesser Kestrel nr Minsmere RSPB, Suffolk, i quickly got the day of work. My day started at 03.00am, leaving my house at 03.15am and arriving at Westleton Heath at 05.58am.

The weather was murky, but calm and me with 80+ other birders gathered at the quarry to view the open heath. Light soon was on us and the day started well with Red Deer, 2 Foxes including one chasing a Rabbit and a Muntjack Deer out on the heath. As it got even lighter a Stone Curlew was spotted and gave satisfactory views for a few minutes. Then after an 1.5 hrs of waiting, the LESSER KESTREL finally showed itself. It was distant, but all the key features were obtained, but as expected the pale claws were not seen!!

News than came through of 2 ALPINE SWIFTS roosting on a building in Lowestoft. I soon arrived and soon found the building to find the Swifts snuggled up in a corner. I waited around for a while hoping they would fly but the weather didn't help and no flight was seen, for now anyway! Then the much anticipated news of the Pallid Swift was recieved on the pager, so yet again another mad rush with me and 10 or so other birders flying down the A12. Parking at the beach car park, i dashed out the car and sprinted to the sewage farm to find the PALLID SWIFT flying about. It showed very well, often flying low just above our heads at times allowing all the features to be seen.

With the weather going downhill i headed back to the Alpine Swifts and on arrival both birds were in the air flying along the promenade. They showed superbly and some good photos were taken.

On the way home i had another look at the Lesser Kestrel, but still no closer and seen in rubbish weather. What a great day. 2 UK ticks, 4 Yearticks.
Posted by Matt Eade at 12:12

A good search around the local area today yet again failed to deliver anything of any interest. First stop was Hope Gap, Seaford Head but after a two hour walk of the usual circuit, just 5 Chiffchaffs were recorded. When will i find that Hoopoe!!

After that disaster i went down Splash Point in a rather put off mood as the wind was a force 1 westerly, and as you would expect all i saw were 15 Brent Geese and 5 Common Scoter moving east. 2 Rock Pipits are still displaying.

After half hour at Splash, i moved on to Alfriston 'Levels' where i flushed 10 Common Snipe and 2 Teal.

Arlington Reservoir only produced 1 Common Buzzard, but no Hirundines and now the thought of finding anything decent this morning was very much fading away.

Oh well, maybe tomorrow, but with all these low pressures dominating the channel i'm not expecting many new arrivals, but you never know!
Posted by Matt Eade at 09:36

After a rather miserable past couple of days despite perfect wind directions today finally proved be slightly better with another two yearticks added bringing my Sussex year to 152 and UK 160.

I'l be birding all day tomorrow so hopefully i'l find something. Bring on the Hoopoes and Alpine Swifts!!
Posted by Matt Eade at 10:35

The usual circuit of the patch this morning was pretty much hopeless with constant heavy fog until the last 15 minutes when it all cleared.

Migrants included just 5 Firecrests and my first Swallow of the year. This date of Swallow equals my earliest record, which was seen about 4 years ago.
Posted by Matt Eade at 03:57

A very quiet morning was soon brought to life when the very distinctive trilling call of a female SERIN was picked up. The bird was very quickly spotted and it flew very close to me and two other observers. Clearly seen was the forked tail and lemon/yellow rump patch. This was a Sussex tick for me and even better to have it down as a self-found bird.

Apart from this the only other sightings were 3 Wheatears, 1 Firecrest and an Avocet which was picked up flying over the east side of Cuckmere Haven and eventually landing on the scrape bringing my Sussex Yearlist to 149.

On the Ouse Estuary Project were 6 Mediterranean Gulls in the mid-morning Gull roost.
Posted by Matt Eade at 03:32

A walk in and around Hope Gap this morning in the constant drizzle produced hardly any migrants. The only new arrivals were 2 Wheatears, 6 Chiffchaffs, 6 Fieldfares and 15 Redwings.
A slightly more interesting sighting today was of a very sleepy Fox that i managed to get within 5 meters of it, and some photos are shown below. After it woke up, it shook of all the moisture and wandered of into the bushes. A lovely sight. 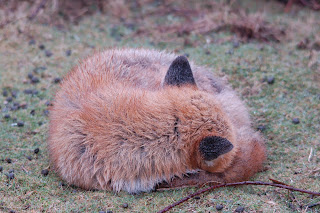 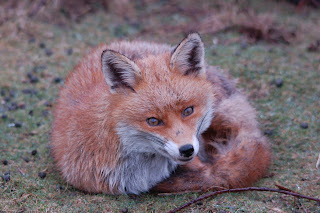 Very quiet in and around Hope Gap this morning with 2 Chiffchaffs, 30 Meadow Pipits and a Goldcrest being the only new arrivals in a very damp, foggy morning.
Posted by Matt Eade at 07:37

The Brent Geese were extremely impressive with the largest flock reaching 145 and several others above 70. The Black-necked Grebe was distant but enough detail was observed to confirm the id. 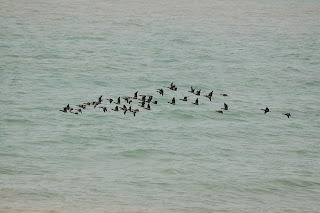 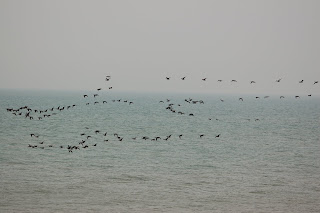 Later on in the afternoon after seeing several reports of Wheatears on the pager, i decided to give Seaford Head another go. Along the cliff edge west of Hope Gap, i finally glimpsed the white-rumped beauty, a Wheatear. It was a male and showed ok but was very mobile. Whilst watching this bird, another two Wheatears appeared. It's finally spring!! Also by the coastguard cottages a Firecrest was fly-catching and a Peregrine was also seen. 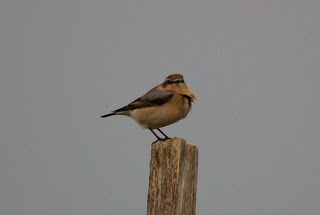 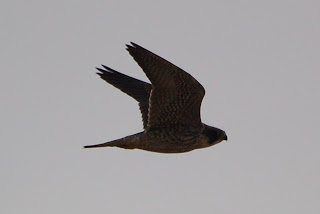 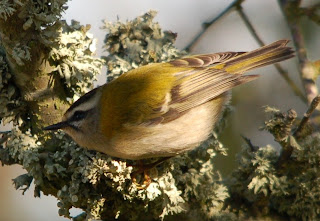 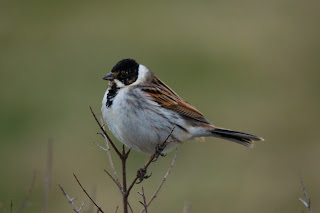 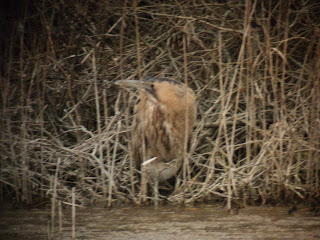 Bittern at Dean's Farm, Piddinghoe
Posted by Matt Eade at 09:42

Had another good day out today in West Sussex. The birds were great, the weather was great.

First stop was Henfield Levels to try and find the reported Bewick's Swans, but unfortunately i couldn't find them. Not much else of note was seen apart from 2 Bullfinches and a drk Gadwall. 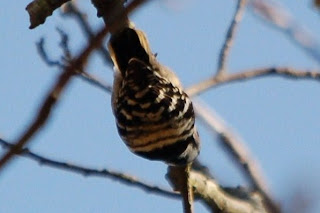 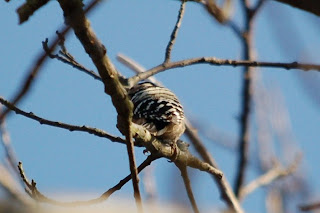 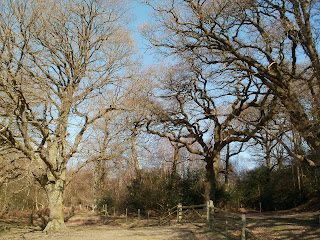 Next stop was The Burgh, but i was brought to a halt on the minor road between Amberley Station and North Stoke when i noticed a figure in a ditch. It was a Bittern and it showed very well, often standing right out in the open with it's neck fully extended. 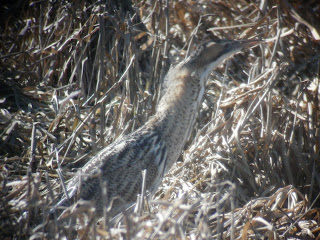 Bittern between Amberley and North Stoke
Up on The Burgh the wind kept any bird activity to a minimum but still 5 Grey Partidges, ca 20 Corn Buntings and 5 Red-Legged Partridges were seen.
I went back to the undisclosed wood after The Burgh and soon re-located the Lesser Spotted Woodpecker in the same place, but it was always seen at a distance. Great day!!

Had a search for the 2 Garganey that had been present since Friday just north of Piddinghoe near Dean's Farm. Unfortunately there was no sign and there wasn't much else to compensate for their absence, just a few Moorhen, Coot and Mallard.

Moving on to Splash Point to catch up on some yearticks. The first tick was a Fulmar flying around the cliffs, the second was a lovely Black Redstart around the sewage buildings (i think a 1w male) and the third were 4 Kittiwakes around the groyne. Sussex Yearlist now up to 134 and Uk yearlist up to 147, with the recent additions of Goshawk and Willow Tit. 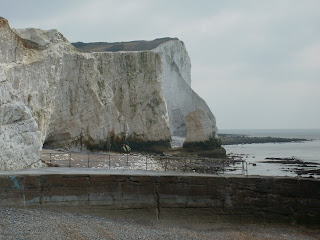 Headed down to Dorset today to see the BUFFLEHEAD on The Fleet, Dorset. It was first seen yesterday evening, and after an anxious wait this morning for it's rediscovery, news finally came through, so me and a few others went straight down there.

To me it seemed a wild bird with no feather damage, it's rather nervous appearence when humans came within 100 meters of it and also it was first picked up on the sea off West Bexington slightly further west down the coast.
I think it was the 17th for Britain and certainly a first for me bringing my UK life list to 309. 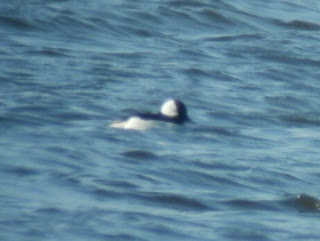 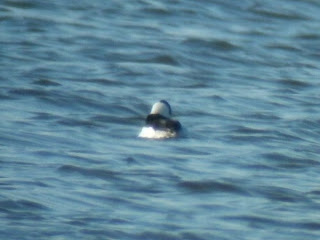 A lovely early afternoon walk at an undisclosed site in Mid-Sussex resulted in my best views yet of a Lesser Spotted Woodpecker. It was a female bird and was picked up by her call and stayed high in the trees but always on the move and after two minutes of great views it flew off further round the wood.

It was also nice to see so much display activity from the local Great and Blue Tits, along with calling Nuthatches and Treecreepers, and also two Bullfinches flew by.
I managed to get pictures of various bird species but unfortunately the LSW was too far away for any picture, but i was too busy watching this very scarce bird. 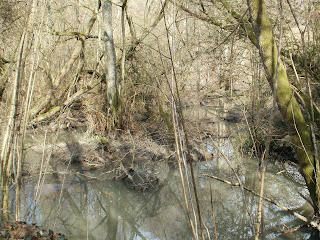 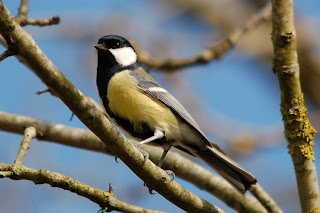 Great Tit at undisclosed location.
Posted by Matt Eade at 07:01

A visit to an undisclosed location this afternoon resulted in great views of a Long-eared Owl, unfortuantely mostly obscured by hawthorn branches.
. 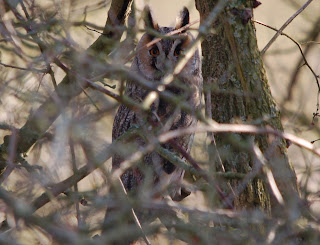 A walk on the downs above Norton, Bishopstone this afternoon resulted in a great mixture of birds with a few good highlights.

Half hour into the walk heading towards Denton Hill a ringtail Hen Harrier was observed flyling low across a field. Whilst watching this a squeal from above alerted my attention to a Peregrine chasing a solitary Woodpigeon. Several attempts were made by the Peregrine , often tearing out feathers off the Pigeon, but unfortunately both birds went out of view so the outcome was uncertain.

Just after this another or the same Hen Harrier was seen flying low across the same field, but this time heading straight towards the Peregrine which had landed in the field. Both birds took part in a mid-air palava, with the Peregrine making many high pitched noises before shooting off like a rocket in yet another persuit of a Woodpigeon, yet again the outcome uncertain. 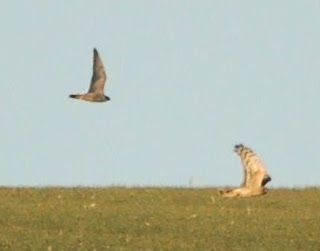 Peregrine and Hen Harrier battling it out
Others birds seen included 2 Common Buzzards, 14 Corn Buntings and a Red-legged Partridge heard, but sadly not seen as i still need it for a yeartick in Sussex.