Well it turns out there is signal at KK. An early start (but with a surprisingly good sleep under the belt) saw us at the abandoned building finding mostly the same species as yesterday, with the addition today of hundreds of Spotted Redshanks.

Moving onto Laem Pak Bia and with the tide soon to be high, we witnessed a very large gathering of Waders, mostly Great Knot but also thousands of Sandplovers and thankfully, after much searching, a single Nordmann’s Greenshank. With this in the bag we soon moved north again to Pak Thale, and again with luck on our side we picked out a very smart Asian Dowitcher. Spoonies had been seen by others but we felt best to hit the road to Kaeng Krachan, via Phetchaburi for supplies.

On the road to KK I happened to notice a stunning Black Baza on a roadside wire, this being a much wanted bird, and was therefore my third new bird of the trip. We quickly passed through KK entrance gate and moved non stop to KM 9 but little there, and with arrival at Ban Krang Campsite bang on 1pm, we turned the car to 4WD and ascended the mountain up to KM 27. Here we walked for a couple of hours up to KM 29 and back without finding our target, the Ratchet-tailed Treepie, however we still have potentially three days to see this. There were plenty of other bits to take our minds of the dip with a mixed group of Black-throated Laughingthrushes, White-browed Scimitar-babblers and Collared Babblers (formerly White-hooded), an impressive sight. By 5.30pm the heavens unexpectedly opened and we were forced to retreat fearing the downhill could cause a few issues. Frustratingly with the weather being as it was, it got very dark in the understorey and therefore  I wasn’t able to make out much detail on a crossing Pheasant, but a female Kalij was almost certainly what it was. Back on lower elevations, three Dollarbirds were found causing chaos with a mixed group of Drongos.

We arrived at Ban Krang C/S (our base for three nights), had dinner, a shower with as little energy as me at this point, and took on an illegal night drive. Straight away we found two Golden Jackal, then over a period of nearly two hours found several East Asian Porcupines, Indian Nightjar, Sambar Deers & a Large-tailed Nightjar. The most byzarre sighting was of a roosting Tickell’s Blue Flycatcher! 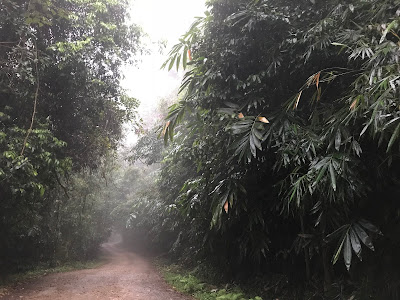