I thought I would test drive my new car down in Somerset yesterday, and so I did. I arrived at Shapwick Heath at 7.50am and started walking west to the drained lagoon. Along this path my first Willow Warbler of the year was in song, and in the distance, 'booming' Bitterns were heard.

Arriving at the lagoon, assembled birders were already watching the 2 LONG-BILLED DOWITCHERS. They were distant at first, but they flew closer allowing good scope views. Also on this lagoon were a Great White Egret, Bittern, s/p Ruff and a Sedge Warbler. A Marsh Harrier also flew over.

Having cleared up here I went straight onto Chew Valley Lake to Herriot's Pool where thankfully the SPOTTED SANDPIPER was present along with a Green Sandpiper. A Sand Martin also flew over.

A very successful trip west, so I headed back into Sussex and visited Weir Wood Reservoir and Lewes Brooks but unfortunately no new birds could be found. UK yearlist now up to 198. 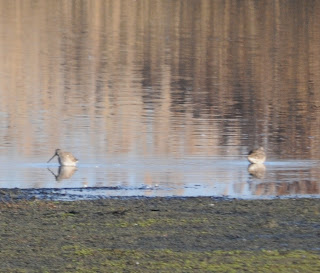 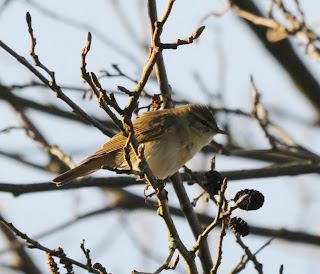 Willow Warbler at Shapwick Heath
Posted by Matt Eade at 03:05