Another calm and sunny morning followed on from a clear night meant that fewer migrants were around today. Once again some good variety was around but by the time mid-morning arrived the area was very warm and bird activity died quickly, although a large roaming flock of Blackcaps in Hope Bottom were still evident late on. Still no Flycatchers for me this autumn (although this is only my third visit), but with the east coast getting many Pieds, its hopefully only a matter of time before the drift migrants hit the south coast.

As mentioned earlier there was a large flock of Blackcaps well over the 50 mark, and mixed in were plenty of other Sylvia Warblers. Willow Warblers were well down in numbers, but once again quite a few Hirundines were noted.

Afterwards I went round Mum and Dads as a squadron of Jersey Tiger Moths had been trapped overnight. I counted 14, but 17 were present early doors. 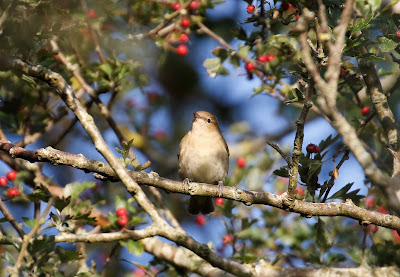