With my first of two Somerset tours kicking off tomorrow, the discovery of the River Warbler at Ham Wall RSPB couldn't have been better timed. I arrived at probably the worst time to see a Locustella, however, the warbler still showed on two occasions and signing continuously during these two sessions. Slight nostalgia listening to this bird and thinking back to the 30th May 2008 when Steve Dawson and myself first heard one singing above Whitbread Hollow, Beachy Head!

I also had three flight views of a Bittern, several Great White Egrets, Hobbies and Bearded Tits whilst waiting. Nine species of Odonata were also great to see, and included a couple of Variable Damselflies.

Fingers crossed the warbler remains for my two groups, although they would probably appreciate the Bittern more so. 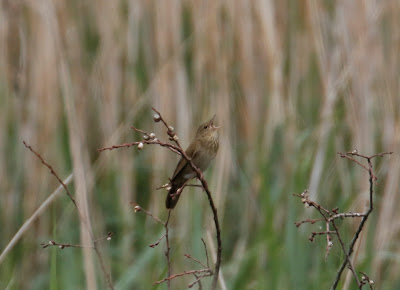