This is the fourth blog post covering my recent trip to PNG with Ian Barnard, Steve Greenfield, Adam Hudson, Tony Hukin & Paulo Paixao. We were under the capable hands of Sicklebill Safaris who had arranged all the flights, guides and transport, but being an independent trip there is that risk that something logistically could go wrong, but in all we didn't come across any major issues, and with an open mind and general understanding of how this country operates there is no need for panic, things will always fit into place one way or another.

From today we ventured into the Central Highlands of PNG basing ourselves at the very comfortable Kumul Lodge (not far from Mt Hagan) for three nights. The gardens here are a birders paradise, mainly because you can easily see a few species of Birds-of-Paradise from the dining room as the periphery to the garden is lined with fruit put out for the birds by the owners. The lodge grounds are also well adapted to the many species that frequent this area. Due to the altitude here, a complete different set of species were on offer for our time in the highlands.

We were led around the Kumul area by a local called Wilson, who in all was a nice enough guy, but not the best guide out there, however he knew the sites which in all honesty is all I wanted out from him.

The weather had thankfully improved and from now on in we encountered little rainfall until the end of the trip (almost, more on that another time).

After another successful visit to the KM17 Greater Bird-of-Paradise lek, it was a tense affair getting back to the airport on time as our driver had abandoned us and gone back to town. The last of many phonecalls to Sam (Kiunga Nature Tours) commenced and thankfully he got the inept driver back to us promptly.

The airport at Kiunga was tiny and Sam kindly stayed with us to ensure that all ran smoothly. This was the flight I was most tense about as it was under the hands of Air PNG, an airline not famous for their on time flight schedule. This was all fake news as the plane arrived on time and in no time we were on our way to the Highlands of PNG, crossing miles and miles of untouched primary rainforest. As we entered Mt. Hagan's airspace the trees became more sparse due to clearance or just the general altitude. The airport of Mt. Hagan was much better than expected, and we swiftly retrieved our bags, and to make my nerves even better, our driver for Kumul Lodge was waiting outside......phew!!

The journey to Kumul was horrendous for mainly the poor road conditions, but initially the traffic, but once we had cleared the chaos of human activity, it was a smooth ride and we arrived early afternoon at our very comfortable accommodation. Before we had even had a chance to settle new Bird-of-Paradise were seen thick and fast with Brown Sicklebills and Ribbon-tailed Astrapias making the headlines, whilst Crested Berrypeckers and Belford's Melidectes kept us entertained.

For the rest of the afternoon we just wandered the grounds and the trails that encircles the lodge. Some cracking birds were found including one of the most spectacular, the Crested Satinbird, formally a Bird-of-Paradise but now lumped into it's own family. Other great species found were the very tricky to see Mountain Firetails, Rufous-naped Bellbirds and various Parakeet species flying over. This afternoon had been a great introduction to our time in the highlands. 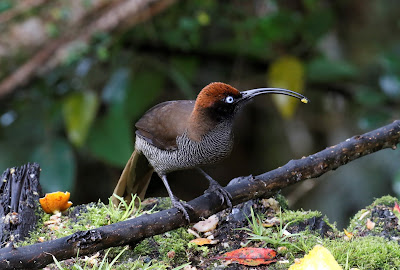 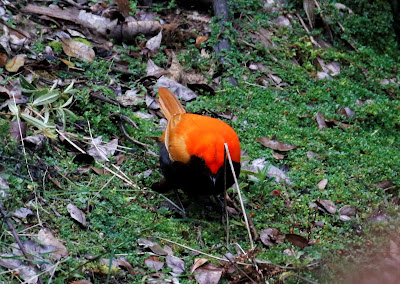 After a lengthy discussion with Wilson the night before who had promised many exciting species, it's fare to say we were quite excited about the day's prospects, although I had some doubts about the promises that had been laid in front of us.

Our first call of the morning was the Tonga Trail (20 minutes NW of Kumul Lodge) to catch up with more BoPs. The trail here is extremely steep so slow progress is the only way forward,  but this does mean not much is missed, and on the ascent our first target was soon found, this being a male Blue Bird-of-Paradise. At our point of stopping/passing out, the area was generally quiet. Passing locals were eyeing us up as they casually ascended/descended the steep ridge without a single strain in their bodies. The constant sound of Greater Lophorinas (Superb Bird-of-Paradise) echoed around, but these remained hidden unlike that of the male Blue Bird-of-Paradise that posed beautifully on an exposed branch allowing top quality views of this very attractive bird. Ian also struck gold along the river where he was the only one to see a Torrent-lark, the rest of us being poorly positioned or too slow to glimpse this quality bird, though we did all see a Mountain Fruit Dove that was superbly picked out by Wilson.

After a good start, Wilson then started to unleash his inabilities to make the correct decision, and with language barriers being problematic, the next couple of hours were interesting to say the least. Firstly, we were taken away from the Tonga Trail to visit an area often frequented by Magnificent BoPs, but being mid morning and now very hot this was a complete waste of time. Then the next option was completely bizarre. The previous evening Wilson had mentioned visiting a site for Dwarf Cassowary, and as exciting as this sounded, all my research into this trip produced no mention of said species, and this soon came into fruition. We stopped off at a cultivated area which straight away felt rubbish for a Cassowary, and walking up to someone's land with three large hutches it all became all so clear. In one of the hutches was a very cramped Cassowary. I didn't even give it a look to determine the species, but it didn't matter and we begrudgingly marched back to the vehicle. The language barrier here was the problem and Wilson was very apologetic, and promised to take us back to the Tonga Trail in the afternoon. The afternoon though was much quieter and little was added to the morning's highlights.

A brief search along the Kumul Lodge trail did produce a good bird for me, this being a male Garnet Robin.

In the evening we ventured deep into the forest to a stake out for the New Guinea Woodcock. We arrived just before dark and distantly heard a strange sound coming from the forest, Wilson stating that this strange sound was in fact the Woodcock. But despite using playback and waiting at its favoured perch, the Woodcock didn't come in and was only heard a further three times, but more distantly. This was a further disappointment to the day, but being dark meant that it was worth trying for Owlet-Nightjars, and with Adam being nocturnal this was easy to achieve. On the walk back a couple of us became stragglers, and we soon heard a response to our recording. It was a very tense ten minutes of luring before our prize was presumably very close to us, and a flash of the torch revealed the bird above us, a superb Mountain Owlet-Nightjar, that in all honesty saved the day.

Highlights for today are: 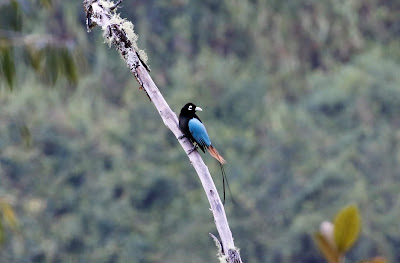 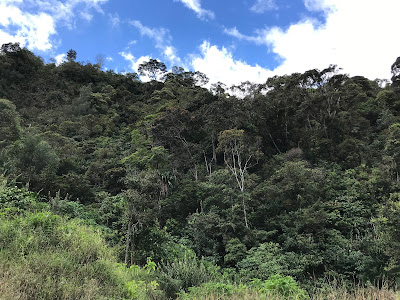 An earlier start today as we teamed up in two different vehicles with a birding ecotours group. Our quest for the morning was to see the Lesser Bird-of-Paradise. It took 45 minutes to reach the 4x4 vehicles that would take us the rest of the way. The area was again a heavily cultivated hillside, but the area is home to only three Lesser BoPs, with one male occupying the area we were heading for.

We staked out the area for two hours and were rewarded with some fantastic vocalisations from the Lesser BoP (and also from the 'exploding' Brush Cuckoos), but it took some time to finally come into view. Birding was good in between though with females of both Magnificent and Superb BoP feeding in the few fruiting trees on offer, whilst a local guide superbly picked out a Yellow-breasted Bowerbird sat on top of a dead tree in the valley below us.

Despite the 15 or so onlookers, the male Lesser Bird-of-Paradise flew into the closest tree to us and showed off its incredible colours and contrasting tail, an exceptional bird. Although mobile the BoP soon settled down and enabled everyone to obtain great views as it sat scanning for females.

We returned back to the Tonga Trail now fully motivated after a successful morning. Another steep ascent in now hot conditions was tough but our efforts in my opinion were worthy as, although we didn't see it, we heard the unbelievable sound of a displaying Greater Lophorina (Superb BoP). The sound of the tail as presumably the bird hopped along it's chosen fallen log was just pure class, and was certainly a childhood dream of mine to witness this very event, it was just a shame there was thick brush between us and it.

In the afternoon I led our group along the trail that encircles the lodge which took a couple of hours, and we then just searched the various open areas around the grounds finding some sought-after species, such as Blue-capped Ifrits, Macgregor's Bowerbird, whilst Ian once again gripped everyone off with a Lesser Melanpitta running across his path.

In the morning we would venture over to Yasukom to endure the final few days in the mountains, and being only the second group to bird here, the list of exciting potential species would hopefully keep the spirits high. 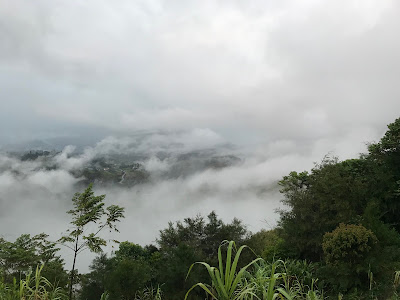 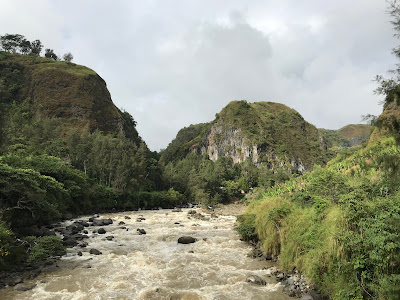