It had been an excellent trip finding some top quality birds along the entire way, and although the weather hindered some birding at the start of the trip and the penultimate day, we were very lucky with the weather. We were also lucky with the majority of logistics including the flight we had been bumped off of from the Highlands down to Port Moresby. The birding however was quieter than expected, not helped by the continuous hunting of many species, including the Birds-of-Paradise. Habitat destruction wasn't particularly noticeable, but with more birders visiting the hunting should in theory reduce.

Seeing the Birds-of-Paradise had always been a dream of mine for many years, and despite the cost of the trip being obviously higher then other trips, it was certainly worth the pain-staking year of saving as much money as I could. The help of Sicklebill Safaris was paramount to the success of this trip, and was the only money saving alternative. Going with a tour company would have easily pushed the cost of this trip over the 12K mark and no doubt much more, with this being such a comprehensive trip visiting regions that very few groups have visited meant that this affordable trip was also highly specialised in the species on offer, so it was just as well we saw said species.

I hope all have enjoyed reading the endless blog posts on this trip, and have hopefully got an urge for visiting this country.

This post follows swiftly on from leaving the Huon Peninsular (sadly a day late due to inclement weather). Our flight from Lae to Port Moresby was on time and after only an hour we arrived into the capital city for the final time, and had now completed all eight internal flights.

Our driver Peter was on time as per usual at the domestic terminal, as were the hotel shuttle service that kindly collected all of our bags that were even taken to our rooms. Anyway, with Peter at the wheel we once again made swift progress to Varirata NP where due to the circumstances of the past few days, meant we now only had four hours of birding in this quite excellent national park, and our final hours of birding in this country.

Along the way a few new birds were found, best being a superb Blue-winged Kookaburra, plus a variety of Kingfishers and other woodland birds. We concentrated on the trail linking the viewpoint and the visitor centre, and were ably guided along this path by two locals. Of the targets we still had yet to see, we managed maybe half, and with the disappointment of missing a whole day here, we ended the trip in style.

The trail was slow going but a couple of Growling Riflebirds, Black-billed Brushturkeys and a bird flock containing a Black-faced Monarch and a couple of female Raggiana Birds-of-Paradise provided some interest, but it wasn't until we entered the far end of the trail our main targets emerged. A burst of playback resulted in a response from a Yellow-billed Kingfisher, and after a brief search I somehow spotted it high in the tree where the sound was emanating from. This was superb but next up was another top bird, and after a bit of shuffling near to the hole on our target tree, a Barred Owlet-Nightjar emerged and just stared at us. Prolonged views were had and it was agreed that the birding for the trip should end here, and we ended this part of the trip with our heads held high. Thought on exiting the park our first marsupial was seen from the side of the road, and it was bouncing!! An adult Agile Wallaby and its youngster showed distantly from the vehicle, and we were amazed it had taken this long to see a land mammal/animal of any kind. Our last night at the Citi Boutique Hotel was just as good as the other two stays, although the cheesecake had slipped in standard, which for me and Ian was a major issue, but we had the below standard one anyway. 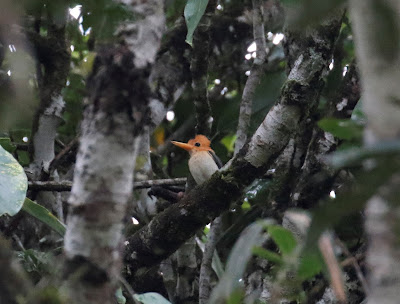 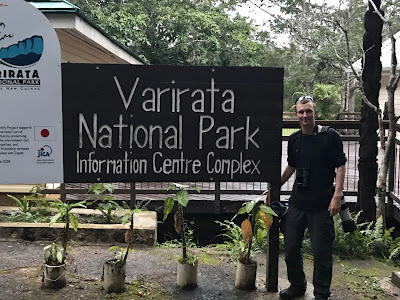 Well it wasn't expected, but today turned out to be my last full day of the trip. I had booked a car from Brisbane Airport and two nights accommodation at O'Reilly's within Lamington NP, some form of luxury to recoup. Lamington is only two-three hours south of Brisbane, so an ideal getaway before the big flight home.

It was only myself, Ian, Adam & Tony who were to take part in this stage of the trip. Our flight from Port Moresby to Brisbane was again on time and we landed and swiftly got through immigration (despite a border force personnel having a go at me for separating from the group I was travelling with) and collected the very nice Audi Q2 with Hertz.

To break up the journey I had found a site just off the route to O'Reilly's, this being Tygum Park (Logan City), and this proved a worthy stop. Upon arrival, we were amazed after weeks of seeing few birds, to just see hundreds of birds around, mainly being Little Corellas although there were lots of waterbirds on the lake and passerines around the lake edges. It was a very enjoyable hour spent walking the perimeter of the lake, and with this being a new country, there were plenty of new birds on offer. The best of these being the spectacular Superb Fairywrens, Magpie-Larks and Comb-crested Jacanas. The sight of many hundreds of Little Corellas being spooked by a White-bellied Sea-Eagle was also excellent.

After this swift visit we stocked up on supplies for our time at Lamington NP, and made our way up the incredibly windy and narrow road up to O'Reilly's, with the undoubted highlight being our first Wallabies, with two species on the way up including White-tailed and Red-necked Wallabies.

We checked in at reception and then drove to our valley view villa, which was basically one of the best places I've ever stayed at. Two large bedrooms, large living area, large balcony with jacuzzi among various other home amenities, including a fully supplied kitchen. It was hard to pull ourselves away from the luxury, but we did and various trails around the campsite yielded many top targets for the area, the best being a superb Albert's Lyrebird. A Logrunner and a Bassian Thrush were also superb, and whole host of other brightly coloured birds that involved for example a male Regent's Bowerbird were found with ease. Red-necked Pademelons (small Kangaroo things) were bouncing around the campsite and showing down to a few feet.

I had wondered off on my own and was enjoying photographing many species at close range, something that hadn't been done all trip, and I certainly made the most of it, with the Bassian Thrush thinking it was hidden from me......it wasn't.

That evening Mr Nocturnal/Adam enticed us out to search for night birds. I really wasn't keen and left the camera at the mansion, which of course ended up being a horrendous idea. Soon after entering good habitat, playback resulted in a tense wait for our target to fly in, and we were treated to fine views of an Australian Owlet-Nightjar. Some Common Brushtail Possoms also kept us entertained for a while before we retraced our steps and back to the reception area, and Adam spotlighted a superb Australian Boobook.

The walk back to the mansion produced some Eastern Yellow Robins feeding around the porch lights, but that evening for me things turned upside down. I had a call from home asking me to try and get the next flight back to the UK due to mum being rushed to hospital, and I had no hesitation in doing so when I woke up in the morning. I reluctantly abandoned the others and drove to Brisbane Airport. Singapore Airlines were brilliant in transferring me for free onto a flight, 24 hours earlier then my originally planned departure. Thankfully my mum was recovering by the time I reached home, although a tense first sector from Brisbane to Singapore with many thoughts occurring in my panicky head was hard to take. All was well when I returned and mum happily went home a week later.

No doubt one day I will return to Australia, and potentially very soon as the birding was just superb, and the long flights weren't actually as bad as I thought they would be.

So that's that. It will now be a long time before my next trip (6 months), but who cares when PNG is now well and truly under the belt! 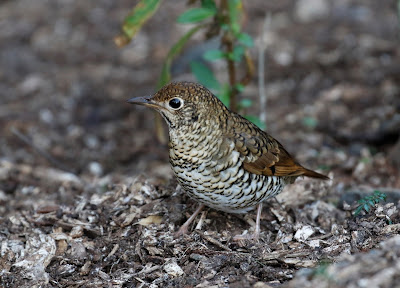 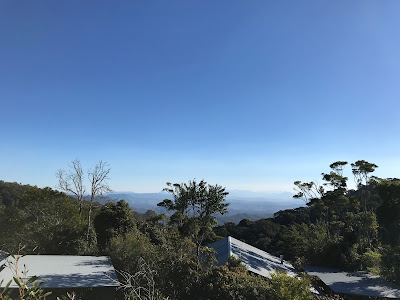 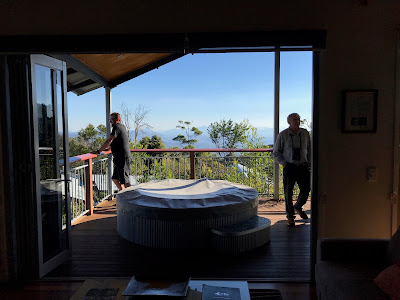 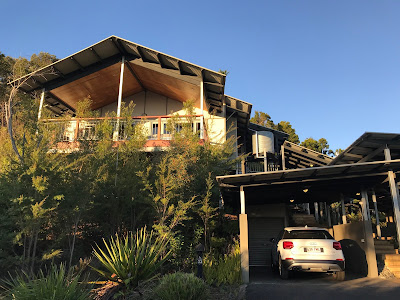