With a day off from work, and the thoughts of many early June 'mega waders' trawling my mind, I fancied a morning down in the Pagham area... something I never thought I would say! Still, early June in the past has done me well with finding some decent stuff, and generally, there are fewer birders around too, and with more eyes needed around Pagham, I opted for there.
I arrived at Sidlesham Ferry at 05.15, with only eight Avocets on offer here. I quickly whizzed down to Church Norton and spent a couple of hours here, checking many sites; including the harbour, the spit, up to Selsey East Beach including The Severals, all the back fields and up to Long Pool. As I arrived in the car park, a flock of 13 Crossbills flew west; this felt like a good omen, but it was as good as it got. The harbour was quiet with very few terns about, but it was nice to get good views of the  Little Terns, and a Knot was near the mouth. Along East Beach, a Spotted Flycatcher was present, and finally, around the back, were 24 Southern Marsh Orchids in a boggy field.
Still being relatively early, I was hoping to be the first birder at Medmerry for the day, and I just about scraped that. The habitat looked brilliant for a singing Blyth's Reed or a posing shrike, but all I could find was a singing Cuckoo, 16 Avocets on Stilt Pool, and a single Common Tern offshore.
Back at Pagham, I spent much time covering the scrub between the visitor centre and the seawall as once again, a singing rare warbler here seemed most appropriate... I wonder how much has been missed in this area? I walked all the way to North Wall, though I could only find a lovely summer-plumaged Cattle Egret and another Cuckoo. 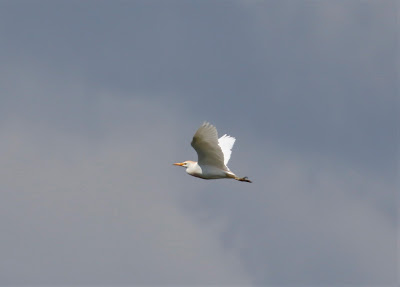