A later start then anticipated as catching up on sleep after a week of earlies was a top priority, and awaiting news on the Cornwall Snowy Owl that unfortunately didn't materialise wasted some of the morning.

The Head was rather quiet although an increase in Blackcaps was evident, and Whitethroat numbers are slowly building. The most interesting sighting was a Blackcap mimicking a Reed Warbler and then a half-hearted Melodious Warbler. The latter would be most welcome this spring.

After collecting a new laptop in Eastbourne, I stopped off in Abbot's Wood, but strangely no Nightingales were heard. Maybe a tad early?

Most Sylvias above are now on territory, with hopefully plenty more to arrive. 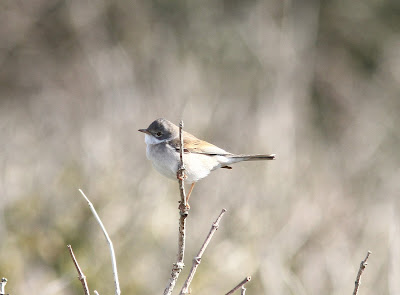