A two day trip up to Cumbria with Ian actually turned into a one day trip as the weather for Sunday was very poor, and although it wasn't great on the Saturday either, dry periods enabled us to see our main targets.

Driving through the night, we arrived at Cliburn Moss (near Penwith) at first light and set about trying to find a much desired Orchid, this being the Lesser Twayblade, a species that averages 5cm in height and blends in remarkably well to its habitat. Despite getting precise directions, it wasn't until much creeping around and bending over that we eventually found some Orchids, although we only managed to find less than ten spikes. The only interest avian wise were a couple of Crossbills that flew over.

Wanting more Twayblade action, our next stop was near to Kirkby Stephen, another site (and a much better one) for Lesser Twayblade. Walking to the stands of heather, it was immediately apparent that many Orchids were present, but mainly the base leaves, but after a few more minutes we started to spot some really good specimens. For me, this was worth the drive alone, but we still had more targets to notch up. A surprise sighting here were a pair of Red Grouse, that were also lurking in the heather, that was until we flushed them. A Ring Ouzel carrying food was also spotted. 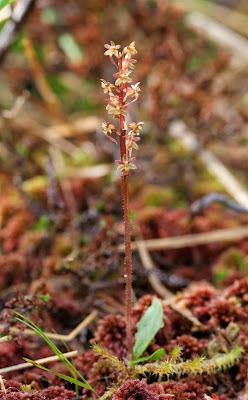 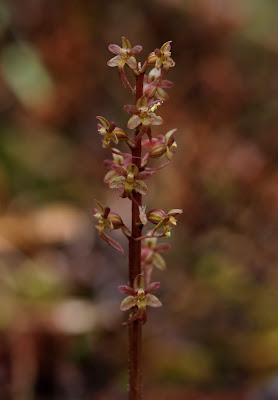 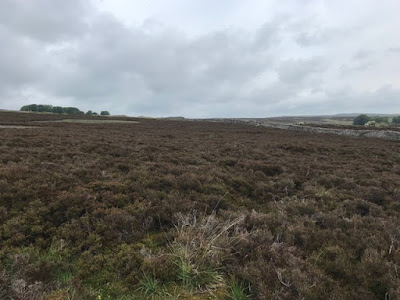 Next up was a 90 minute drive west to Sandscale Haws where another tiny, but much rarer Orchid was in store. This did mean booking onto a guided walk as numbers this year had only peaked at around 200 spikes, where previous years have peaked at 2000 spikes. As unsociable as we both are, we tagged ourselves onto the line of keen elderlies and marched into the dunes. After some brief explanations of the dune system, after an hour we found ourselves at a small colony of the superb Coralroot Orchids. Again another small Orchid, but a superb plant and seemingly in perfect condition. The rain had gently increased from hard drizzle to rain and so we decided to find our own way back to the car, finding many Northern Marsh Orchids and a couple of Bee Orchids. 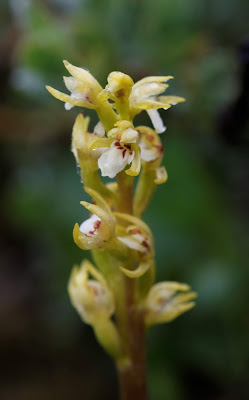 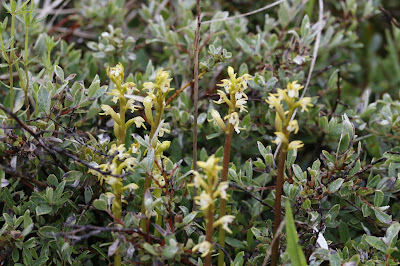 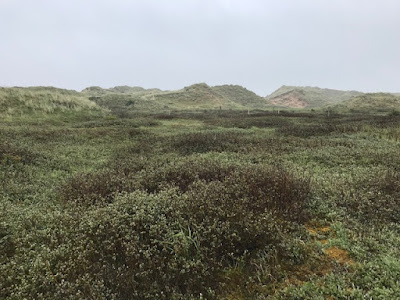 The weather was still poor and therefore we drove to dip on some unlikely Small White Orchids at Little Asby, this site being completely churned over by the cattle, and being too early it was no surprise we failed to find the only two plants that survived last year. It was great to hear a 'drumming' Snipe, and some noisy Curlews, both on their breeding grounds The weather was set to improve and so we made our way back towards where we had come from, this time positioning ourself at Foulshaw Moss. Not only home to nesting Ospreys (we saw one of them), this site is said to be productive for White-faced Darters, a species I had only seen one before way back in 2009 in the Cairngorms, and a species Ian had yet to see, and so pressure was on in the remaining hours of the day to find some.

Surprisingly even the sun came out, and with this emerged plenty of Odonata, including a minimum of two White-faced Darters (male & female). An Argent-and-Sable Moth also passed through (exciting Ian anyway), and there was a singing Tree Pipit, many Redpolls and a Red Kite also flew over. 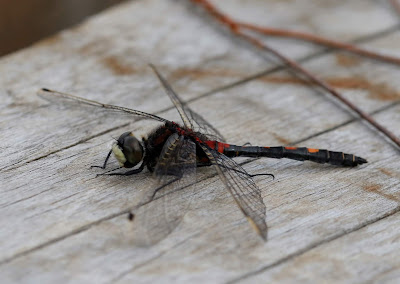 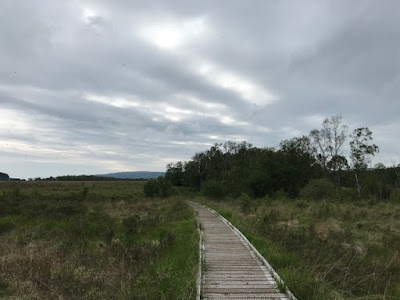 After a brief nap on a bench, I was ready for the drive home (stopped at Arnside Knott for some yet-to-flower Dark Red Helleborines) that took around six hours, not helped by the M25 junction being closer, meaning to divert through Uxbridge. Anyway a really good day seeing some very rare species, but it was a shame to come home early due to the weather.