An overwintering Ring Ouzel has been by far the highlight this week. First reported last week by an unknown observer, on Tuesday (with Jasper alongside) I glimpsed the bird as it flew out of sight. I tried again yesterday without Jasper, but failed to find the ouzel in its usual spot. So, today with Jasper I tried again, and upon exiting the area, I found the ouzel as it fed in the sheep field. The bird showed for a few minutes, though as usual for this species it was particularly wary of my presence, and it soon flew off. This time though I had my camera ready and managed to get some shots.

Other interesting sightings at the weekend were second-winters of both Caspian and Yellow-legged Gulls, and the Water Pipit that was mixed in with the many Rock Pipits - of which some will soon reveal themselves to be littoralis. 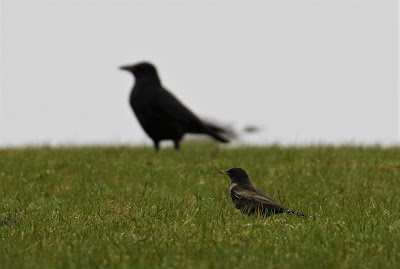