Finished work very early this morning so I decided to go up Seaford Head. However on the way a phonecall from Geoff soon sent me over to Beachy for an interesting Treecreeper, which shows a range of positive features for being a Short-toed Treecreeper. Annoyingly, the bird was incredibly elusive for the time I was there, showing for two minutes during my five hour visit. Luckily, John Cooper who found this bird managed to capture a series of shots, of which a couple can be seen below with some annotations, and hopefully not too repetitive from DC's and RJF's blog.

Since the sighting I have worked, but have now had plenty of time to personally go through the wing formula, more so to convince myself (and understand it as for me I was very confused for a while), as field views (although promising at the time) are not hard evidence. A couple of long hours comparing images, matching up articles etc, below are my personal notes on this bird. Features missed out have been mentioned on the blogs mentioned above.

As mentioned above, the first three pictures below are those taken by JFC. All highlighted captions are those that I've referred to in one of the Birding World articles kindly pointed out by Jake Gearty. 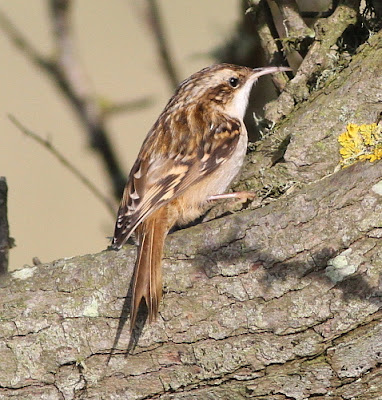 the blackish bar on the outer four secondaries is consistent in width, but this feature would have been better backed up if the wing was more spread. All photos of the bird the angle appears the same.

(heavily cropped image of the above image concentrating on the wing-bar)
dis-regarding the obvious plumage features, I have spent a lot of time looking at the wing-bar and to work out the overlap of pale bars between P6,7 &8. P6 from the outer edge of the wing and working into the centre of the wing, it is quite clear that the overlap of pale bars on P7 &P8 are about equal with the overlap on P7 &P6. I concentrated on the phrase 'about equal' as there is nothing really comparable, until photos of Common Treecreeper were looked at, and this showed the above overlaps being far from equal, somewhat convincing myself that the picture above fits well into the 'measurements' for a Short-toed Treecreeper.
Another strong feature for Short-toed are the distal edges of pale bars on the outer webs on P6-P8 are clearly pointed. Common Treecreeper would show a more rectangular shape. 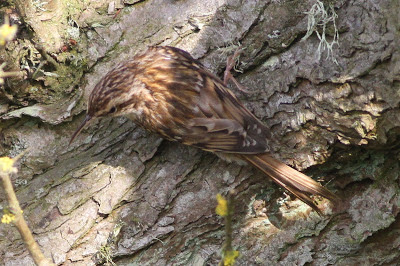 the longest tertial with its relatively 'dark' inner webs, all dark outer web contrast very nicely with the strong pale tip.
P7 lacks the pale fringe coming off the white spot onto the outer webs which Common Treecreeper would show, in fact the spot is pretty much a spot with the only fringe slightly forming on the inner web.
The rather plain brown forehead lacking any white streaks is certainly a favourable feature for Short-toed. 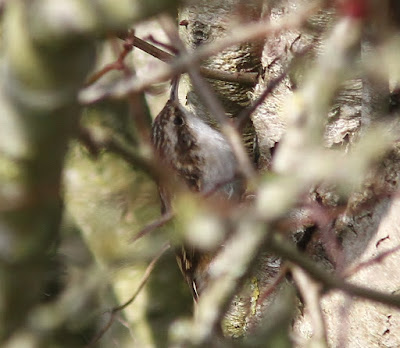 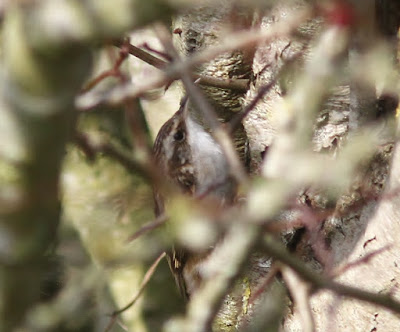 I'm certainly in no position to say this bird is 100% a Short-toed Treecreeper, but based on what I've managed to work out for myself after several long headaches I can't see any real reason why it isn't one. In terms of wing formula, the only hesitation for me is the primary tips and how they are spaced out from each other, but again looking at a series of photos on the web, there is in theory nothing wrong with this. Combine all this with the plumage features which are subjective, they do still fit well for Short-toed. So there you go!!