A poor nights kip due to mainly camping, but with the addition of no pillow and it being colder then expected. We arrived at the KM 33 trail just after first light, and within the first few stretches it was apparent that trouble lay ahead in the form of a herd of Elephants. We glimpsed one which was great, but over the next hour we couldn't progress forwards as firstly, they were on either side of the trail, and very close to the trail. We kept our distance but close enough to have a real adrenaline rush when they made all their noises etc. Despite wanting to get to the Eared Pitta sight, we had to wait a long time for he Elephants to move off, and thankfully they did just that, but leaving a massive trail of destruction in their wake, including at the Pitta spot. All was not lost though, a surprise find were two Banded Broadbills, plus lots of other nice bits. Obviously no sign of any Pittas, including going down presumed Elephant tracks to search elsewhere, although a Siamese Fireback showed nicely where the Elephants had been.

This took most of the morning and after having lunch back at the campsite (via another look at a Coral-billed Ground Cuckoo) we went to search along the first km of the Khao Khieo Road. Walking along the road produced a stunningly tame Orange-breasted Trogon, plus a decent mixed species flock. We eventually found a trail into the forest, but surprisingly this led to a blind with an obvious feeding station. Knowing Blue Pittas had been seen along this stretch recently, it was likely this would be the spot, so we sat it out. Half way through our ordeal a Thai photographer came in and very kindly gave us his mealworms and went to photograph something else. This persuaded a few birds to come in, including a Siberian Blue Robin, White-rumped Shama, and after three hours of a numb bum and aching backs, our target bird emerged from the shadows of the dense undergrowth, a stunning Blue Pitta. It still proved elusive but finally perched on the exposed log where we both managed some pics. This was our main target at Khao Yai having heard them here in 2013, and to get views like this was superb.

We arrived at the TAT pond half hour before dark where only a single Brown-backed Needletail was present, and in the gloom, two huge Great Eared Nightjars flew low over us.

There was no need for a night drive tonight after last nights successes. Another poor nights sleep in a now overcrowded campsite was had, even all the insects couldn't cover the surrounding snoring. 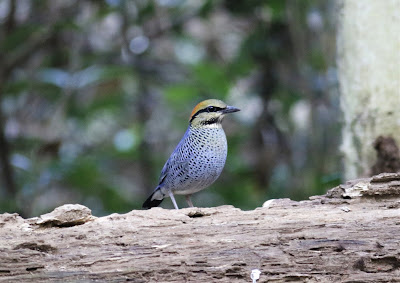