We were up at 3.30am yet again and drove the 2 hours south to Pak Chong to try for some Rain Quail at Lam Takhong reservoir. We arrived bang on first light and headed to the short grass areas. From a few steps out of the car we flushed our first Barred Buttonquails, as well as many common birds also found in this habitat. As dawn rose many Egrets and a few raptors started to surface, and then master flusher Ian came across a series of Rain Quails, totalling six birds. With this in the bag nice and early we quickly stocked up on supplies for our time in Khao Yai NP.

We entered early morning and headed straight for the KM 33 trail where the previous couple of days had seen frequent sightings of Eared Pittas. Although we didn’t know exactly where the spot was, we figured out it couldn’t have been too far along. To cut a long story short, it wasn’t until it nearly got dark that we heard two Eared Pittas very near to us, but due to the gloom they remained invisible. The first two kilometres of the track had obviously been a Elephant playground as there was destruction in most directions.

At midday we left the trail and got our tent set up for two nights at the campsite. Before setting the tent up we quickly made our way to the rear of the toilet block. This wasn’t by choice, but there was one of our top targets hopefully here, and so this was the case, all three Coral-billed Ground Cuckoos seen together at a known feeding station. Absolutely brilliant!!

After a lengthy lunch we again set out on KM 33 trail where it was very quiet, though eventually a good bird flock moved through that held a Long-tailed Broadbill, Laced Woodpecker, Black-and-Buff Woodpeckers and a few other bits. The end result were the heard only Eared Pittas.

In all a mixed day but the highlight was now to come. Last time in Thailand we failed miserably to find an Elephant, and so this time we had to find one. So we did a night drive (getting told off in the process for using spot lights again) and after only twenty minutes a superb bull Elephant emerged from the darkness, into the full beam of the car’s lights and slowly walked towards us. I slowly retreated but I wanted a video and some pics so I stopped and watched the superb beast amble past. An absolute huge adrenaline rush being so close to a very dangerous creature, which thankfully was used to the cars.

We carried on again and came across another Elephant. There were two guiding vehicles in front who were flashing at us to move back as the big Nelly had started to walk towards the on-lookers. However, no way was I budging and they nervously sped past the bull as it made a direct line for us. Still not budging, the Elephant came even closer to us and tilted its head as to provoke us somewhat. It worked and we carried on past it. Yet another mammoth encounter. We saw another one and a couple of Civet species before calling it a night. We kind of fell asleep listening to a Collared Scops Owl and a couple of Great Eared Nightjars. 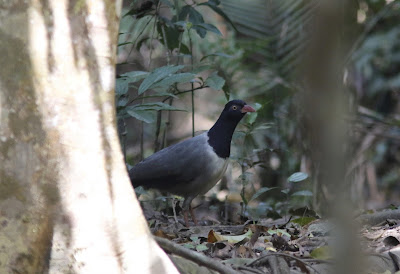