With the possibility of getting a Giant Nuthatch on the trip list, a visit to Doi Chiang Dao was in order, with also plenty of other bits on offer. We set off very early as the ascent to DYK substation was very steep and bumpy and took nearly 1.5 hours. What didn’t help was bumping past the turning so we had to back step by about 5km. This still had us at the intended campsite in the early morning light, with a stunning Chestnut-bellied Rock Thrush very close to the finishing line.

We spent the majority of the morning around the campsite area, often wandering off to good looking habitat, but try as we might, finding a Nuthatch was proving difficult. We did come across three Chestnut Buntings and a number of other species that made it sort of worthwhile. A quick tape luring session at the pond failed to produce a Black-tailed Crake as expected.

Our mood was getting worse as we had now abandoned the campsite and tried a few firebreak trails to try our luck there, but still nothing.  A couple of surprises were on offer though, a large party of Silver-breasted Broadbills and a skulky White’s Thrush. We were also very hungry having eaten alll the food we had brought up with us, this being two packs of small biscuits and a bag of crisps.

We gave  up despite several more attempts, and started the descent, that turned into a very long descent. Who knew all the goodies were waiting for us. A number of fruiting trees were in evidence and these attracted plenty of Bulbuls, Barbets and Leafbirds, but by far the highlight was driving down the mountain and hearing a fast flowing stream to one side. I drew up and looked down onto the rocks only to find two stunning White-crowned Forktails. Not only were these completely unexpected, they completed our Forktail list for the trip, and also relieves pressure off me as Ian wanted all three Forktails! Just around the corner from here a superb Grey-backed Shrike performed nicely, rounding off a very good day in the end.

We drove north for an hour to stay in Fang for four nights, ready to hit the mountains over the next few days. Dinner was hard to come by this evening, and we ended up in some joint where we enjoyed what were probably pig intestines or something around that area or function, only to be washed down by a frozen bottle of beer. The prawn crackers were good though!! Anyway a great day and a very good day list.

The many highlights for today are as follows: 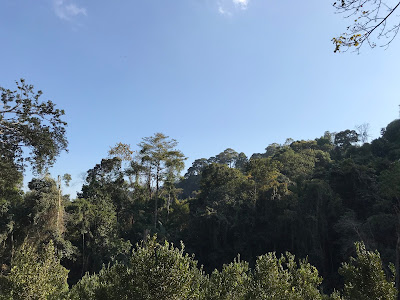