With a moderate SE wind forecast I was up extra early and down Splash Point for first light. Annoyingly though there was hardly anything moving and was probably due to the constant heavy rain which was set to leave the channel mid morning. I gave it an hour with the highlight being two stunning drake Eider that flew by close inshore.
Afterwards I stupidly walked the Cuckmere and got soaked for my efforts only finding the Cackling all sorts still present, though no White-fronted Geese.
I then continued my seawatch alongside Jack Bujok where the rain had eased and opened up the channel for what was to be a record day for Pintail moving east. Also of interest was a close in Great Northern Diver offshore that only showed twice in the bumpy sea, but appeared to be in partial moult to s/p. However, despite the SE wind and time of year it was disappointing to see so few Brent Geese on the move. 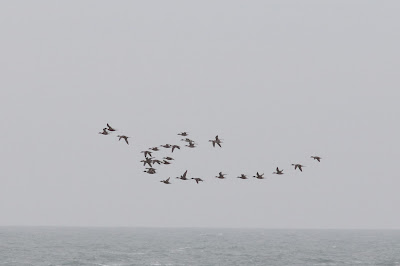 one of many flocks of Pintail throughout today with the largest flock being 48. Todays count of 296 was thought to be a county record with the previous being 279 off Worthing on 31st March 1990, many thanks Paul James for this info. However John Newnham has kindly got into contact and it seems the 13th March 2006 saw 420 flying east, a day that saw 800+ past Dungeness. So a great record but not good enough.
For Splash Point this has smashed any record, evidence of this being a year total of 192 in 2003 being the highest annual count. Many thanks Dick Gilmore for this info. 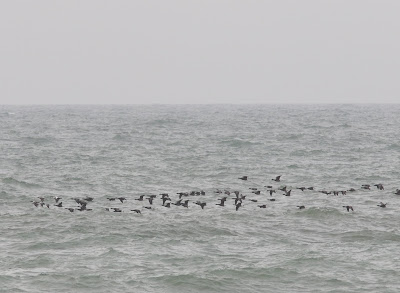 from left to right: 5 Shoveler, drk Eider and Brent Geese