Day 8
I woke up and looked out the window and was amazed by firstly the weather, and then the spectacular scenery. We had anchored in Fortuna Bay and had one of two options to undertake. I chose the option for a hike up into the mountains and down the other side into Stromness. Although this was more of a historical walk as this was Shackleton's final trek when he found help in Stromness, the scenery and wildlife encounters were well worth the effort. Landing on the beach in Fortuna, Antarctic Fur Seals dominated the beaches including lots of pups, and strangely the sky was full of birdsong, which down here can only be one species, the South Georgia Pipit. Excellent views were had of these, and then the hike began where the most incredible views were witnessed. Again a very surreal feeling walking on an island that so few people have been to. Descending down the other side we came across a small Gentoo Penguin colony, I took a paddle in a waterfall which was freezing, and eventually arrived at Stromness. Access to the building are prohibited due to asbestos still being present, but this didn't matter as there were plenty of Penguins and Seals about to not worry about some buildings. For a time, a Gentoo was walking parallel with me, and its hard to think why these Penguins build their colonies so far away from the sea.......maybe they just like a good walk to.
The Plancius had sailed round to meet us at Stromness, and back on board we slowly sailed to Gyrtviken, home to one of the most intense whaling stations back in the day, but also home to Shackleton's grave, a museum and the British Antarctic Survey. We paid a whiskey toast at the grave, then was left to wander around the area. A brief look at the museum and shop was good, but walking around to the Brits gave stupendous views of Antarctic Terns, a lone King Penguin and many South Georgia Pintails. After some fun with a few young Elephant Seals, we took zodiacs back to the Plancius and were treated to a barbeque at the stern with a form of disco. It was a good night and strange to be in a once horrific area full of slaughter to now having a good time in a peaceful setting, well apart from the loud music. 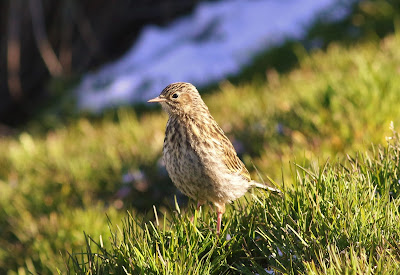 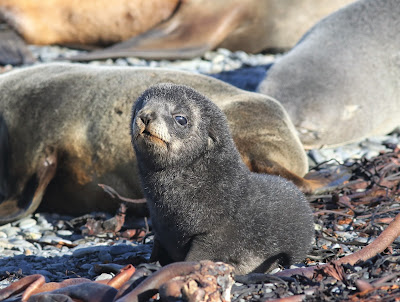 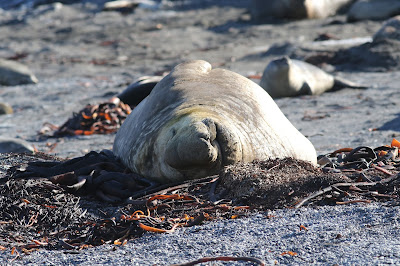 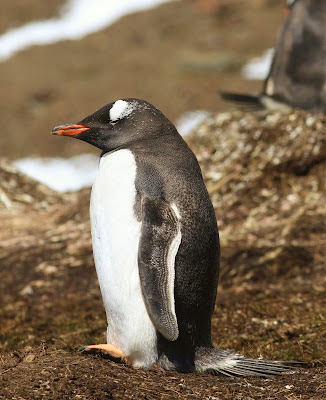 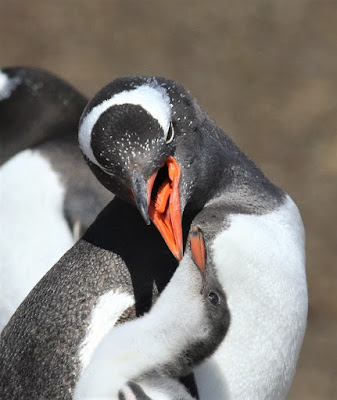 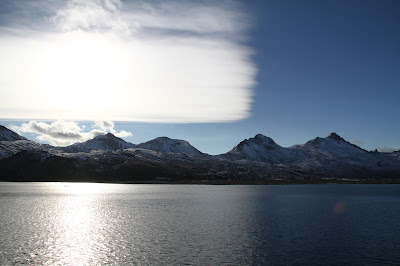 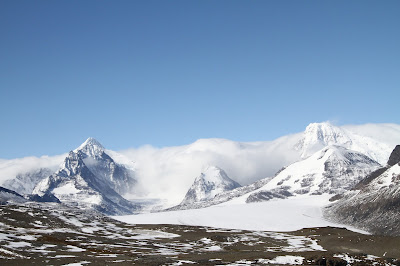 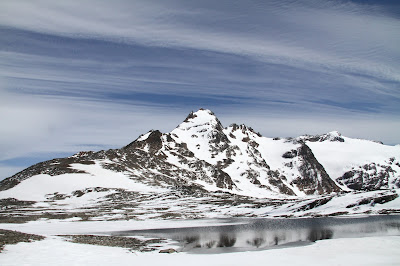 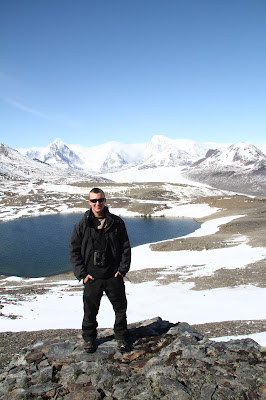 walk from Fortuna Bay to Stromness 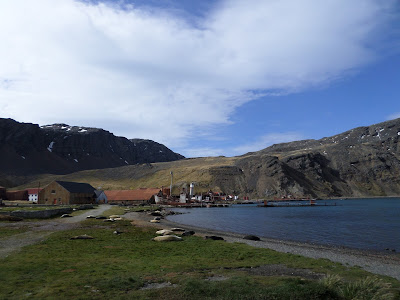 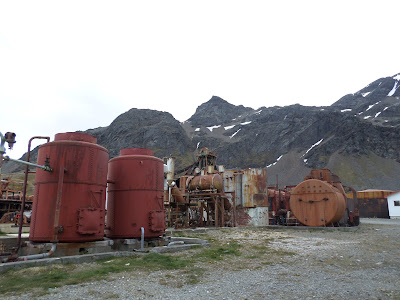 Grytviken - scenes of slaughter and near extinction - thankfully no longer 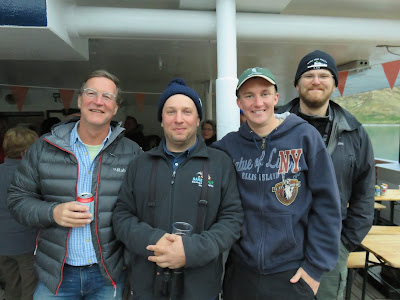 Day 9
We had anchored in Godthul and woken up to yet another stunning day. Although the wind was slightly stronger today we were treated to yet another stunning walk up to Brigg's Point. Again on the beach we had to fight of the Fur Seals and yet again the Pipits were singing everywhere and yet again showing well. Another Gentoo colony was encountered. The final part of the walk was on loose scree and at the top the views looking down the mountainous coastline were brilliant. It was gutting at the end of the walk to find out the people undertaking a zodiac cruise saw a Leopard Seal, a species I failed to see during the whole trip much to my sheer disappointment.
The afternoon was probably the best afternoon ever. We anchored off St. Andrew's Bay and took zodiacs to the beach and once on the beach, we were just swarmed upon by countless King Penguins It was just ridiculous and out of this world to be sat on the beach and families of Penguins just wondering past, taking a close look, hanging around for a bit and plodding on. This bay is home to 250,000 pairs of King Penguins, and the noise certainly put this to right when overlooking the main colony. This encounter was by far the highlight of the trip, and certainly my best wildlife encounter ever. 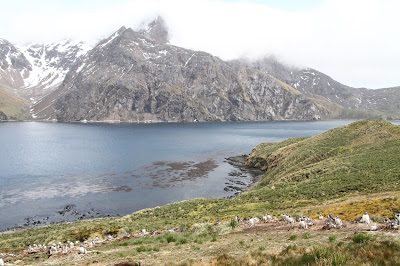 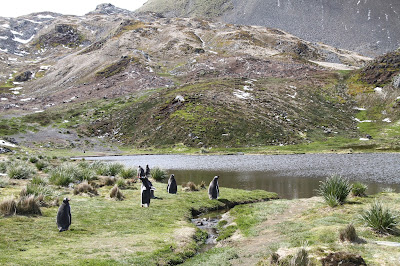 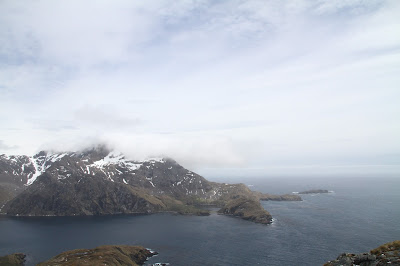 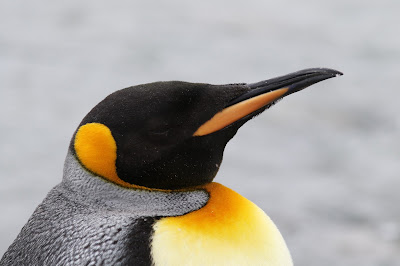 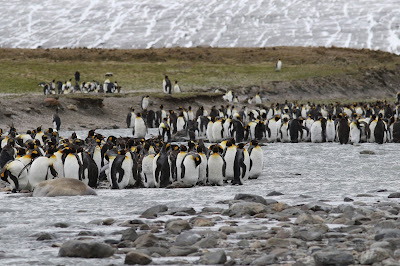 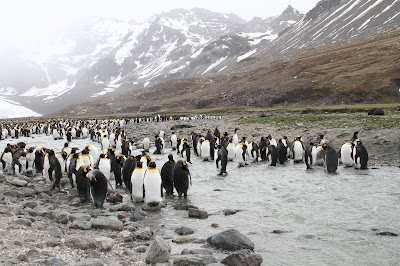 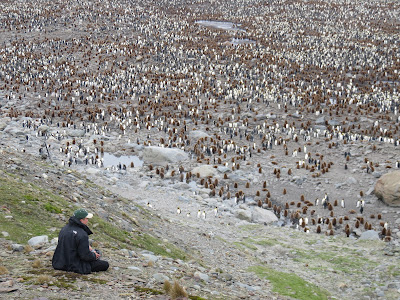 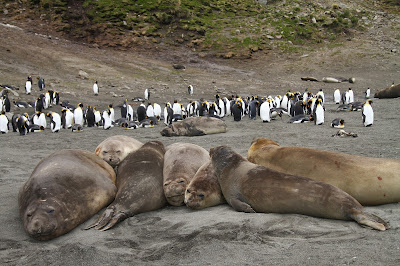 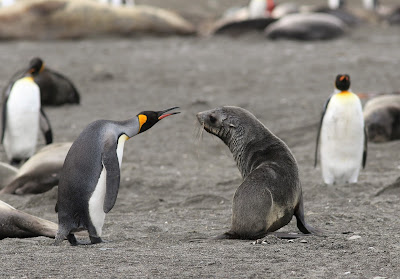 King Penguins and much more at St. Andrew's Bay

Day 10
A very early wake up call and I very nearly stayed in bed, but I'm so glad I didn't. From last night to having the most amazing time with the Penguins, this morning I had the most incredible encounter with the young Elephant Seals. I had such a great time I missed photographing the stroppy brown King Penguins. I became a celebrity for a short time as people kept photographing me with three Seals on or around me. My bins, waterproofs and everything else was ruined by the volcanic beach material and Seal slime, but never mind, I was left with a moment of a lifetime.
Back on board and after lunch the weather had got progressively worse but still good enough for our final zodiac cruise on South Georgia. The cruise was good (heavy snow at times) with our first Chinstrap Penguins of the trip, a small colony of Macaroni Penguins and some lovely views of the very common Wilson's Storm-Petrels. A close encounter of an iceberg was nice and finally the cruise ended with our last South Georgia Pipits
Our last excursion on this superb island was a cruise up the Drygalski Fjord. Yet again stunning scenery and some lovely views of Snow Petrels. In the afternoon we left the fjord and set south SW for the South Orkney Islands. Every Diving-Petrel was photographed leaving the island but despite a good deal of stringing, I wasn't able to tick a South Georgia Diving-Petrel, but I gave it a good go. Now for a few more days out at sea before seeing land again. 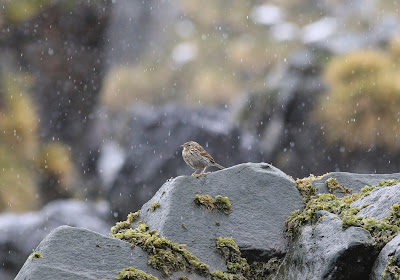 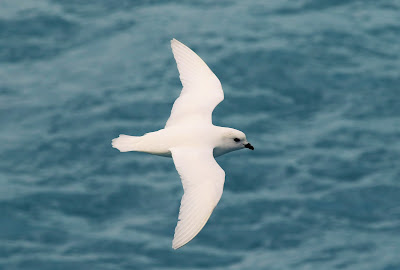 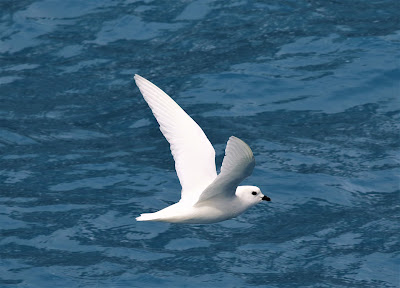 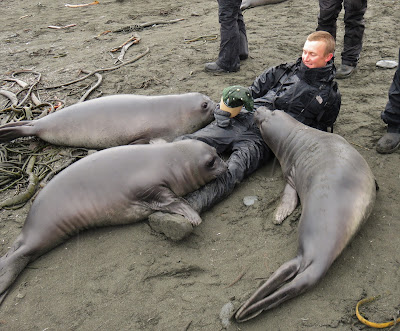 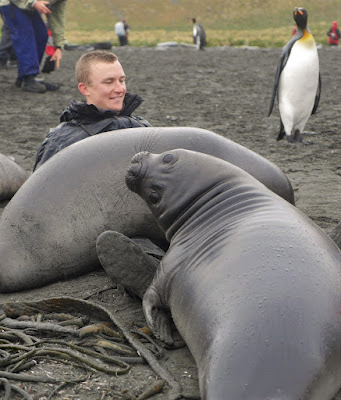 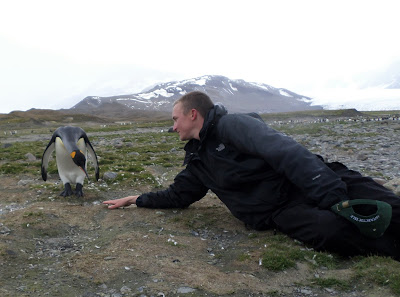 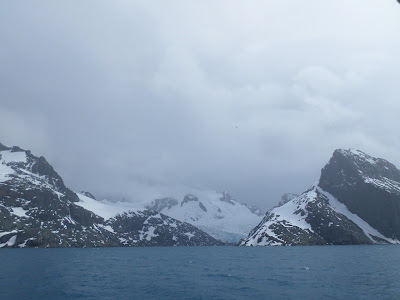 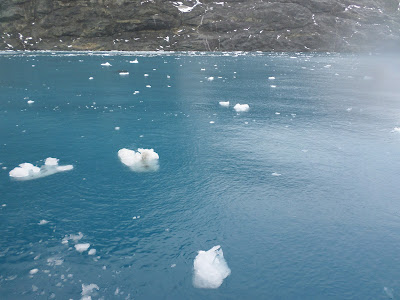